Demand for police to investigate torture allegations against SANDF 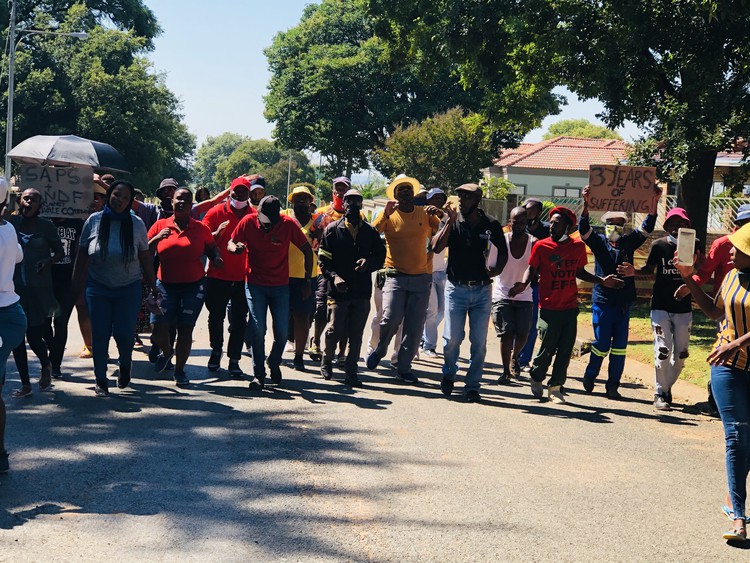 A group of Happiness Village residents marched from Dunnottar town centre to the Police Station on Thursday. They are demanding that police investigate and bring to justice South African National Defence Force (SANDF) officials who allegedly assaulted, tortured and committed other human rights violations against the community. They also accuse the police of failing to pursue cases brought against army officials.

Most of the people who joined the march were unlawfully evicted by the SANDF from the Marievale military base in 2017. Since their eviction, residents formed the informal settlement of Happiness Village nearby. Since then they say they have been terrorised by the military.

On Thursday, the group handed a memorandum to Warrant Officer Peter Twala who promised to pass it on to the relevant department.

“We express concern regarding the lack of investigations into the harassment and assault that members of the Marievale Community Association continue to suffer at the hands of SANDF members,” read the memorandum.

It further stated that residents have been “suffering at the hands of the SANDF through intimidation, harassment and several assaults.” Residents referred to one of the most recent attacks on 7 February, when they say soldiers tortured, beat them, and demolished five homes to force them to leave the base. They claim soldiers came in large numbers, carrying guns. The police did nothing, they said.

Community leader Chris Koitsioe said, “The army has violated a series of court orders. Our people go through continuous torture, despite opening cases with the police but nothing has been done.”

He accused police of “turning a blind eye on our suffering” for over three years. “It is high time they pursue investigations and bring army officers to book. Surely army officials are not above the law,” he said.

Dudu Nontyi told GroundUp that she was forced to leave her home after being violently evicted by the army. She said, “We want the members of the SANDF who have been committing crimes to be arrested. What is so special about them?”

The memorandum also calls on the Minister of Defence and Military Veterans to intervene and hold military members in Marievale accountable.

“We have been living in fear because both the police and army are failing to protect us. We have to constantly watch our backs, afraid of being attacked. Our cases are being sidelined by the police. Who should we turn to for help?” asked Msimelelo Mangisa from Happiness Village.

Police were given two weeks to respond to the community.

Next:  PRASA’s new boss too old to take up the role

Previous:  Why the Chief Justice has been ordered to apologise