Police accused of failing to act on complaints against SANDF 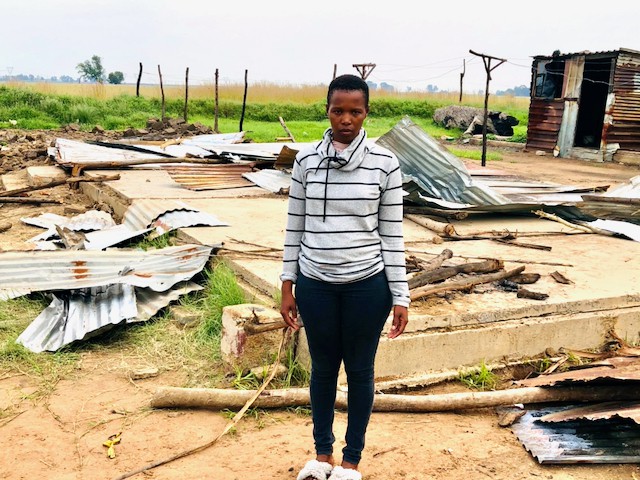 Sinoxolo Nwazi standing on the site of her demolished home. Photo: Kimberly Mutandiro

Civilian residents at the Marievale military base say police ignore their complaints of torture and assault carried out by soldiers and that the police rarely help them when the South African National Defence Force (SANDF) contravenes court orders.

Residents, unlawfully evicted by the SANDF in 2017, formed the informal settlement of Happiness Village nearby. Since then they say they have been terrorised by the military.

This past week, the residents say soldiers tortured, beat them, and demolished five homes to force them to leave the base. They claim soldiers came in large numbers, carrying guns and fired gunshots. The police did nothing, they say.

“Every single time when we called the police and told them that soldiers had attacked us they did not come. On Sunday, when we were attacked by soldiers, police refused to open cases. On Thursday around 1pm, we also called them but as usual they did not come. The security forces of our country are failing us,” said Chris Koitsioe.

On Thursday, Lawyers for Human Rights (LHR) sent attorneys to Dunnottar Police Station with residents to push police to open cases of assault and contravention of court orders against the SANDF.

“Whenever residents call police during or after attacks by the army they are ignored. We will also deal with the police and get an order if we must. They [police] must do their work,” said Louise du Plessis of LHR.

“We will be pushing a court case of contempt against the SANDF as they have defied several court orders which order them to stop harassing residents and provide adequate accommodation.”

Themba Maphanga said he was severely beaten on Sunday by soldiers. He is currently unable to see out of his left eye. He said soldiers burst into his shack at 9pm and attacked him, his wife and children. They dragged him outside and beat him with a golf club.

Maphanga said the soldiers took him and several others and dragged them into a mud hole. “They said they were teaching us a lesson as men because we were refusing to leave the area,” he said.

“They slapped me across the cheek and said we must leave and go back to Mozambique,” said his wife, Gracinda. “When I tried to speak they said I had no right to answer because l am a foreigner.”

Pete Chabalala said he was also assaulted that night. “I am struggling to walk after they beat me with a golf stick on my leg and arms. Life here in Happiness Village keeps getting harder and we don’t know what to do,” he said.

Sinixolo Nwazi and Bulelani Magaba said soldiers demolished their homes on Sunday and again in the early hours of Thursday after they had rebuilt. Three other shacks were also demolished.

“They say we must leave Happiness Village, but where do they want us to go?” asked Magaba.

“Every time when we call the police to come to our rescue they do not come. To think that everything the army is doing is in violation of our court orders but police will not listen,” said Nwazi.

Police Spokesperson Sergeant Harry Manaka said investigations were underway. “We are currently waiting for more information to come forward. The investigating officer has been instructed to investigate further.”

He said soldiers had opened a case of malicious damage to property against Happiness Village residents on Sunday. Manaka said they alleged they had been attacked, that the community had two firearms and had erected new shacks.

“It is surprising that soldiers allege that we attacked them. How can civilians like ourselves take on a full army holding big guns … that is absurd,” said Koitsioe.

In previous statements, the SANDF has denied attacking residents.