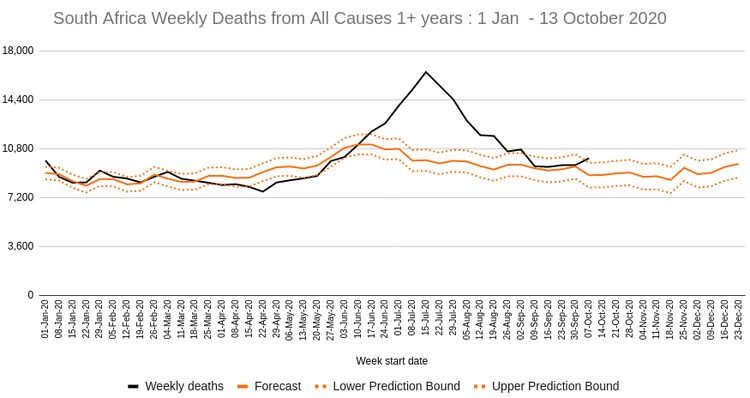 This graph by the Medical Research Council shows that that after several weeks of declining mortality, deaths in South Africa are once more above the forecast predicted by historical data. This is almost certainly due to Covid-19.

The number of weekly deaths in South Africa is exceeding historical forecasts again. This is according to the latest report from the South African Medical Research Council (MRC).

This is almost certainly due to Covid-19, and comes after a few quiet weeks in which the number of deaths was only slightly above estimates based on historical data.

Every week the MRC publishes the weekly number of estimated deaths in South Africa based on death registration data obtained from the Department of Home Affairs. The data for each week shows the lower and upper prediction for the number of deaths and the actual forecast number which is midway between the lower and upper bounds. This is calculated based on historical data.

Excess deaths, which refer to the difference between the observed number of deaths and the forecast number of deaths based on historical patterns, have exceeded the upper prediction for the week ending 13 October.

The forecast number of deaths between 7 and 13 October was 8,860. Yet the MRC recorded a total of 10,109 deaths, an excess of over 1,200 deaths. But this is still much better than the situation in July, when there were over 6,000 excess deaths in some weeks.

The tally of excess deaths from natural causes (i.e. not homicide, suicide, or accident) for the period between 6 May and 13 October 2020 stands at just under 47,000, while the number of excess deaths from all causes is at 40,000. Unnatural deaths are much lower this year, perhaps primarily because of the reduced number of cars on the road during lockdown, though since level 2 began on 18 August unnatural deaths have begun increasing again.

Every province is reporting deaths above forecast, but in the last couple of weeks, Free State, Eastern Cape and the Western Cape appear to have the steepest increases relative to population size. At the height of the pandemic, in July, Gauteng, Eastern Cape and Free State were worst hit.

Of all the data used to estimate the seriousness of the Covid-19 pandemic in South Africa, the weekly mortality data provided by the MRC is the most important. The daily number of new Covid-19 diagnoses and confirmed Covid-19 deaths provided by the Minister of Health is useful, but undercounts in an unpredictable way. South Africa on the other hand has a pretty decent vital registration system and the recorded deaths at Home Affairs, while still an undercount, are a more consistent and stable way to understand what’s happening.

The spike in mortality for the week ending 13 October is troubling; it’s an early warning sign. The pandemic is nowhere nearly as bad as it was in July, but it can still get worse.

It is vital to emphasise the four messages that reduce the risk of infection:

Next:  No housing on Rondebosch Golf Club for now