What will our children eat if this looting does not stop? asks resident 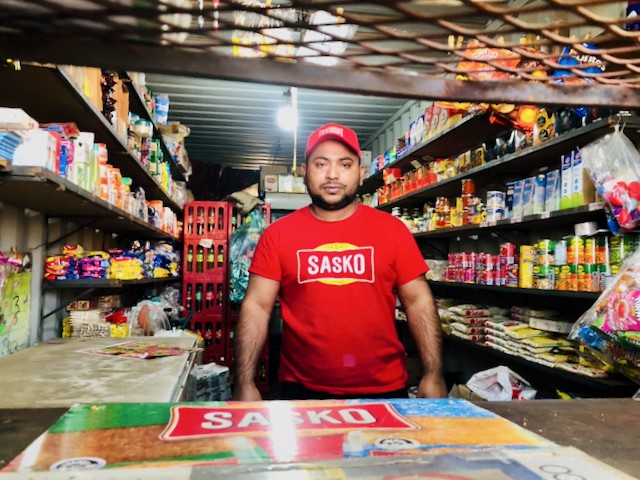 Sharif Ahmed has the only shop left in Langaville extension 4 thanks to a brave widow and a group of local residents. Photo: Kimberly Mutandiro

Groups of residents in some parts of Brakpan have vowed to protect immigrant-owned shops. At a spaza shop in Langaville extension 4 belonging to Sharif Ahmed, originally from Bangladesh, there were long queues throughout the day on Wednesday. It is the only shop in the area left unstripped, thanks to a brave widow and a group of local residents.

People were buying bread, sugar, mealie meal, cooking oil and airtime. Takeaway business owners in the area, who make amagwinya and township-style sandwiches, were desperate for flour and bread. At 5:30pm, when Ahmed sold the last loaf of bread, there were still people in the queue.

Protecting the shop were Sibusiso Dhlamini and his crew, looking out for any attempts at looting. They also have a shift system to guard Ahmed’s landlady inside her home. She is a widow, and she has not dared to leave her home for days. She also did not want to be named in our article.

“I’m not opening my door because I’m afraid of people who threatened to kill me for protecting a ‘foreigner’ – that’s what they called my tenant. I have my soldiers in here if anyone dares to be violent,” she shouted to us from inside her house.

As in much of Bakpan, the looting in Langaville began on Monday. The widow took a stand, vowing that no one would pass her gate. The looters at first came no further than the street corner. But on Tuesday morning, they started to throw stones on her roof and said they would torch her house. Ahmed called Dhlamini, who immediately mobilised a group of nine men.

By then, Ahmed’s other spaza shop had already been looted.

“I’m happy that my South African brothers have come to my rescue,” he said, smiling from inside his shop as he attended to his customers.

“The looters will go through me and my crew first before attacking shop owners. This is what happens when people target shops, we suffer,” said Dhlamini. “I doubt that such people [looters] even give themselves time to think about how this will affect the community.”

Dhlamini said people were now having to pay R34 return fare and queuing for hours to buy bread and a few basic commodities in Springs, 12km away.

His crew also patrol the area at night, checking on various immigrant shop owners, even though their shops have been cleaned out by looters.

“We just check if they are ok, because that’s what normal people do,” Dhlamini said.

In extension 6, would-be looters have been eyeing Minitotz Monta and his shop. Here too, residents have come together to protect him. Stanford Ntshane said, “During the day we are sitting outside keeping watch. At night my son and his friends light a fire and keep watch until late and alert us if they see anything suspicious. We are sleeping with our ears open and we will teach those looters a lesson.”

Girma Sefa, from Ethiopia, who operates a shop in Extension 1, is struggling to walk after looters attacked him on the street on Tuesday. Community members came to his rescue, chased the attackers away, and called the police.

“We’ve asked the community to blow a whistle if they see trouble … They [looters] did not manage to go into the shop but they broke pipes,” said resident Sphiwe Sebego.

The group managed to stop an attempt to loot the shop on Tuesday night.

“I’m happy that the community are helping me. I’ve managed to use Sphiwe’s vehicle to take my stock to safety in Dunnottar,” said Sefa.

“As we speak many people are struggling to get bread. What will our children eat if this looting does not stop?” asked Sebego.

Next:  Soup kitchens in Makhanda struggle to keep up as demand doubles