Soup kitchens in Makhanda struggle to keep up as demand doubles 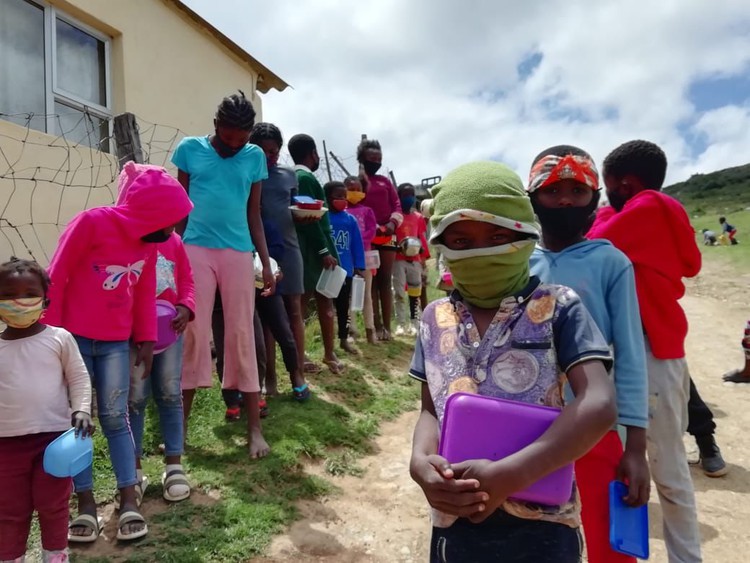 The termination of the R350 Social Relief of Distress grant for nearly three months, together with ongoing job losses has resulted in scores of people relying on local soup kitchens for their only meal of the day.

We visited a few soup kitchens in Makhanda in the Eastern Cape this week.

Lulama Maseti, from Extension 8, said that after noticing how many breadwinners in her community had lost their jobs, she started the Lulama Covid-19 support team soon after lockdown last year.

“Initially this was meant for little kids who couldn’t withstand hunger. But after seeing that people were seriously starving, I decided to allow them to come in and get food too. The R350 was very important to them. I serve about 60 people two days a week. But I hope the government will reinstate the grant,” she said.

Maseti, 34, lives with her mother and two children who attend school. She is also unemployed and relies on donations and the money she gets from her mother’s pension. She said managing a soup kitchen during the Covid-19 is challenging.

Di-anne Oosthuizen runs a soup kitchen from her home in Currie Street. She said children come from all over Makhanda, although she prioritises children that would have been relying on school meals.

“It is very heartbreaking but also touching to see how some adults have also come to queue for food like kids. For the old people who can’t come, we dish and a family member would take it to them at home. There are quite a number of unemployed men and women that come here,” said Oosthuizen.

She said some people even offer to wash pots and dishes in exchange for plates of food. She feeds about 160 people a day but recalled one day when it went up to 300.

“Some people have lost jobs again when Level 4 started and with the R350 no longer available, they have no alternative but to come to soup kitchens. When they arrive, I make them line up to have social distancing and sanitising of hands.

“I cook samp and beans, soup, rice, tinned fish, cabbage stew, pumpkin … I cook only on Tuesdays. I used to cook two days a week but because of times getting tough for everyone with little sponsors and donations, I am only able to do it one day a week.”

Rosey Centwa, 37, who was in line, said she lost her job as a domestic worker during the start of lockdown last year. She has three children and is a single parent. She was benefiting from the R350 Covid-19 grant, she says. It was small but made “a huge difference”.

Siyamthanda Dyantyi, an activist from Vukani location, also runs a soup kitchen. She said the R350 grant made a huge difference to many people. “People were able to buy small amounts of food and electricity. There was social security provided and people were able to provide a meal for themselves. Now the grant has stopped while the situation on the ground is getting worse, leaving many households in hunger,” said Dyantyi.

Her soup kitchen feeds about 150 people warm meals twice a week. But in recent weeks, this number has doubled and she is struggling to keep up.

Next:  Unrest July 2021: Personal notes from a KZN reporter