Grant beneficiaries have to wait for hours in long queues, and spend more of their grants on travelling 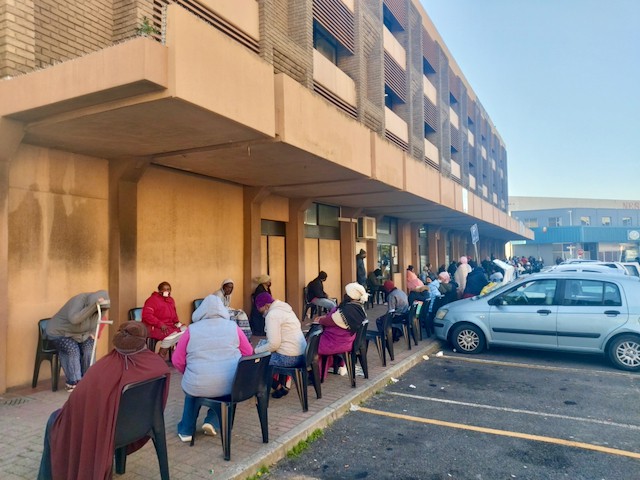 Long queues outside the SASSA office in Bellville last month. Some beneficiaries had stood there since early morning after travelling from Delft, Elsies River, Manenberg, and Uitsig. Archive photo: Liezl Human

At the start of lockdown in March 2020 a number of community halls in Cape Town were closed to slow the spread of Covid-19. This meant that hundreds of social grant beneficiaries who relied on getting their payments and other services at local centres now had to spend the little they had to travel to the nearest South African Social Security Agency (SASSA) offices that were already overwhelmed with recipients.

Geraldine Philander, a temporary disability grant (TDG) recipient, said that she finally started receiving her grant in July this year. She had been struggling to get it since January when the TDGs lapsed and caused a massive backlog which resulted in long queues outside the agency’s Bellville office.

Philander had to take two taxis to get from her home in Belhar to the Bellville office and usually pays about R13 per one-way trip. This after the service point in her area closed. “It’s a long way. At my age I can’t walk too much,” she said.

Provincial SASSA spokesperson Shivani Wahab said they had no choice but to suspend services at some of their busiest sites during lockdown. This has resulted in long queues outside the SASSA office in Bellville and Eerste River, with beneficiaries often sleeping outside on the pavement in the hope of securing an opportunity to be assisted.

According to Wahab, all services in Kraaifontein, Wallacedene, Bloekombos and Northpine are suspended.

We asked for an explanation why community halls were closed as SASSA service points because of Covid but received no response.

He said that many people from Kraaifontein have to travel far to SASSA service points. “At least when people were travelling by trains, the cost of travelling was cheaper. But now, it is quite expensive,” he said. For people who are sick or elderly, travelling to receive their grants is very difficult, he said.

In order to meet the need for service points, Wahab said SASSA was using the Northpine Community Hall in Brackenfell for two months. It was suspended after Northpine residents “raised concerns that SASSA’s clients were polluting the area with waste while accessing the venue for services”. The site was closed in December last year.

In response to the closure, the City of Cape Town said it arranged for the Northdene Hall in Kraaifontein to be used but SASSA, having used this venue before, deemed the venue too unsafe for staff.

“The safety of our staff remains a priority and under no circumstances would SASSA deploy staff to a venue that poses a risk to their safety,” said Wahab.

Gillion Bosman, chair of the Western Cape legislature’s Standing Committee on Social Development questioned SASSA’s decision to not use the Northdene Hall, especially since the Kraaifontein SASSA office has been closed for over a year.

In a recent statement Bosman said he asked SASSA to engage with the City about securing additional venues for services. “The City availed an appropriate venue, Northdene Hall, which is well-located, better equipped to handle Covid-19 protocols and social distancing,” said Bosman. He said that SASSA’s refusal was “irrational” and that security measures were offered.

Abigail Peters, paralegal at the Black Sash said, “Generally satellite offices that were assisting to mitigate the issues of long queues, are no longer available.”

The Delft Civic Centre service point opened in February this year, but also closed again in early April, said Peters. This has also exacerbated the congestion at the Bellville office.

Next:  Cape Town centre offers a hot meal and a vaccine to homeless people

Previous:  KwaMashu commuters must wait another year to catch the next train