In the 1970s there were dozens of trek fishing crews. Today, there are only four left.

It is surprising that in this day and age some fishers in False Bay still use a centuries old method to catch from the sea. Trekking is a traditional way of catching fish which has been done for centuries. Eco-friendly, sustainable and fair, everybody gets something: the seals, seagulls, the fishers, and the owners of the boat and the nets. Modern technology is hardly involved. It’s man against the elements. 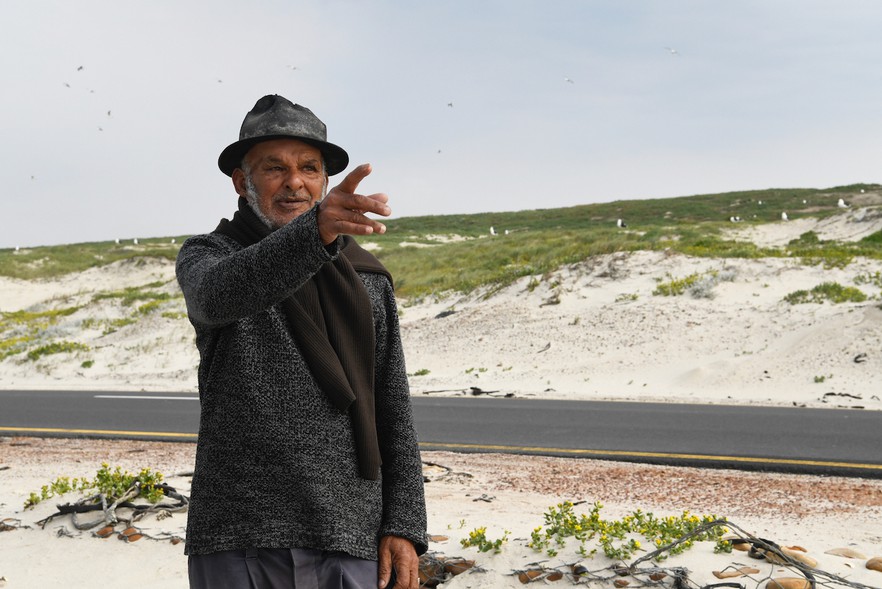 Early in the morning, the Spotter, Ibrahim “Bream” Abduragman, checks the sea and informs the fishers if it’s worthwhile going out and where they should throw their net.

“Boss Nartje” then drives the truck with the fishers, towing the boat to the beach to the spot indicated by Bream. There are various signs the Spotter takes into account: the colour of the sea – whether it’s too clean, which means no fish; whether there is kelp or plankton, which is a good sign, as is the presence of seagulls. Currents and tides also play a role. 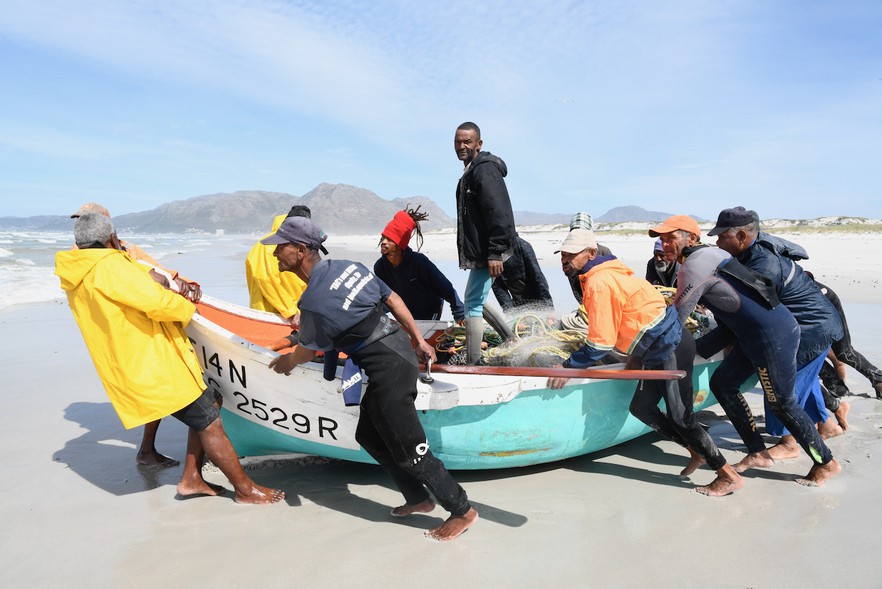 After the boat has been unloaded from the truck, the fishers push it close to the surf. They then have to negotiate the right waves so that little by little they move the boat straight into the surf until it’s free in open water. This exercise requires great strength and coordination. 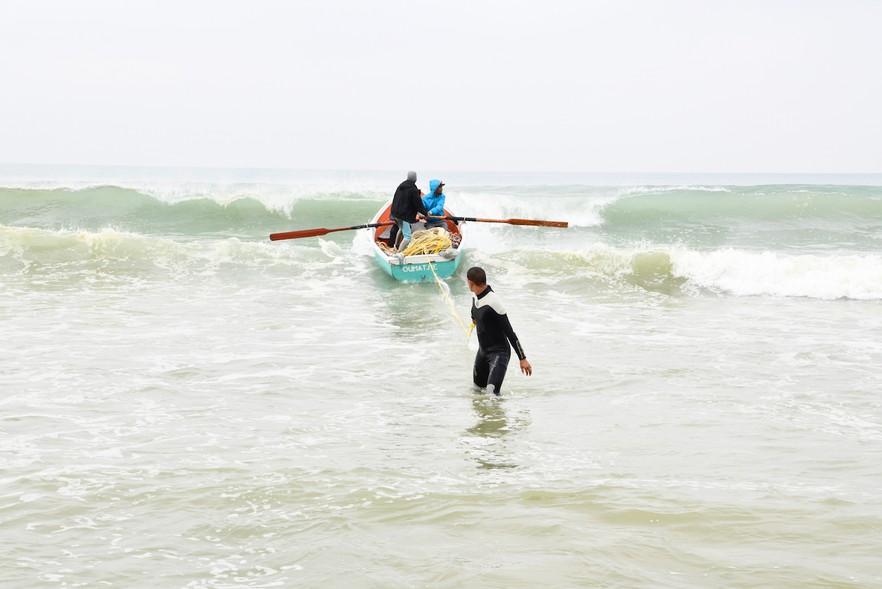 One of the fishers, Quintin “Boere” Hendricks, who helped to push the boat beyond the surf, holds on to a rope attached to the net in the boat and takes it back to the beach. The long rope unfolds and will eventually be used by a crew to pull the net out of the sea.

In the boat are two rowers and a third fisher. They row about 200 metres to the left. When far enough out, the third man throws the net into the sea. 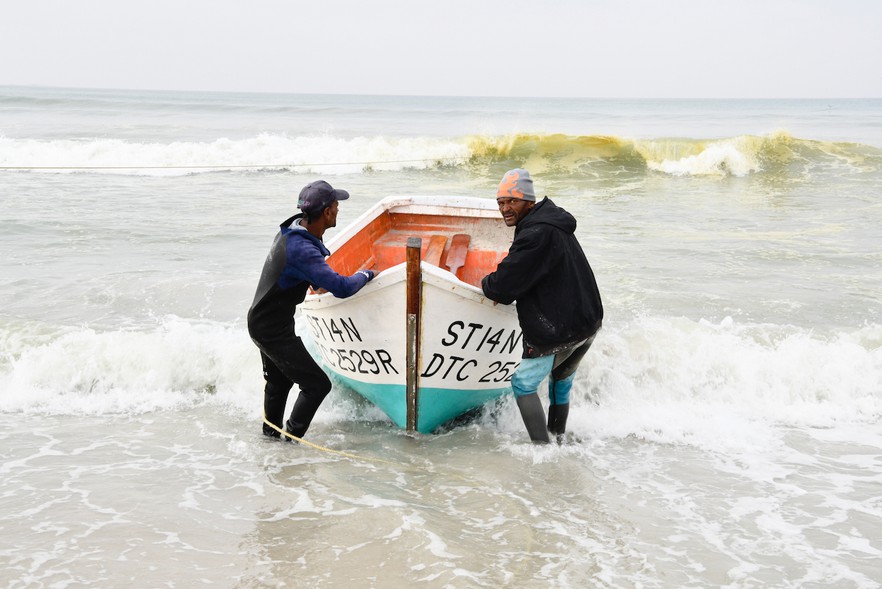 Once the boat has been rowed back to the beach, a second rope is unfolded. The fishers on that side will start pulling together with the ones on the far side. 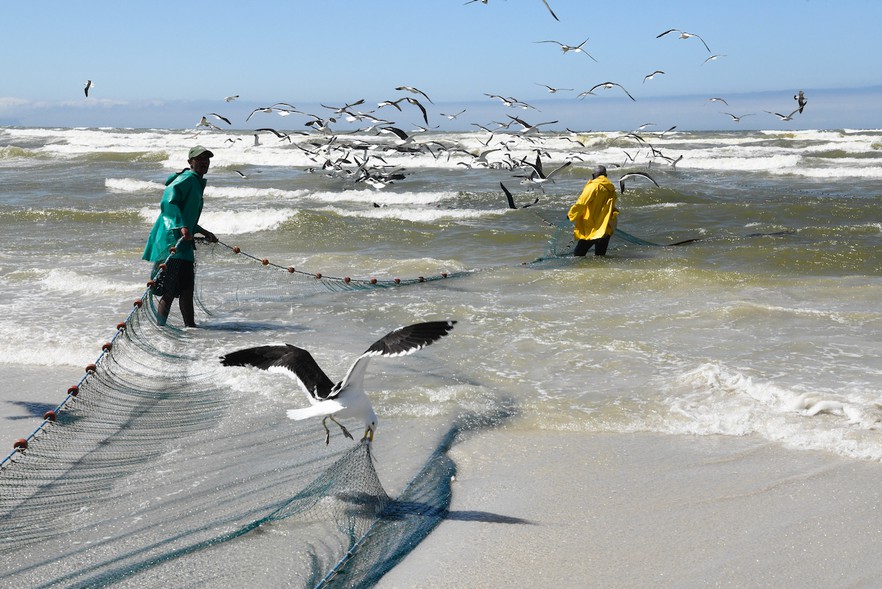 Both sides of the net are now pulled in by two teams of fishers, steadily closing the distance between the ropes. Before the net is hauled onto the sand, seals and seagulls are already feasting. 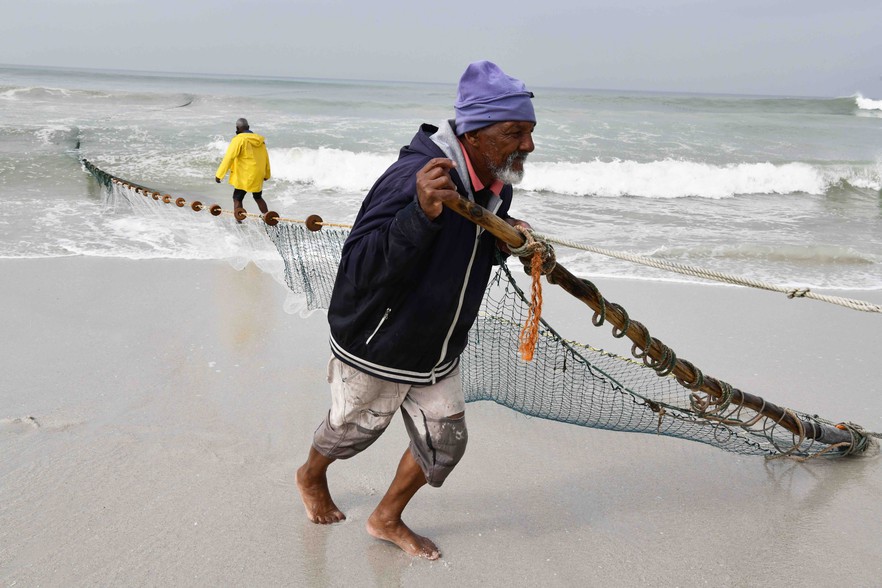 Parkwood Andy “Pagood” Webber and Anthony Baron (in yellow coat) make sure that the net is pulled in the right direction. Sometimes a strong current can push it the wrong way. They also try to ward off seals diving into the net and gorging themselves. 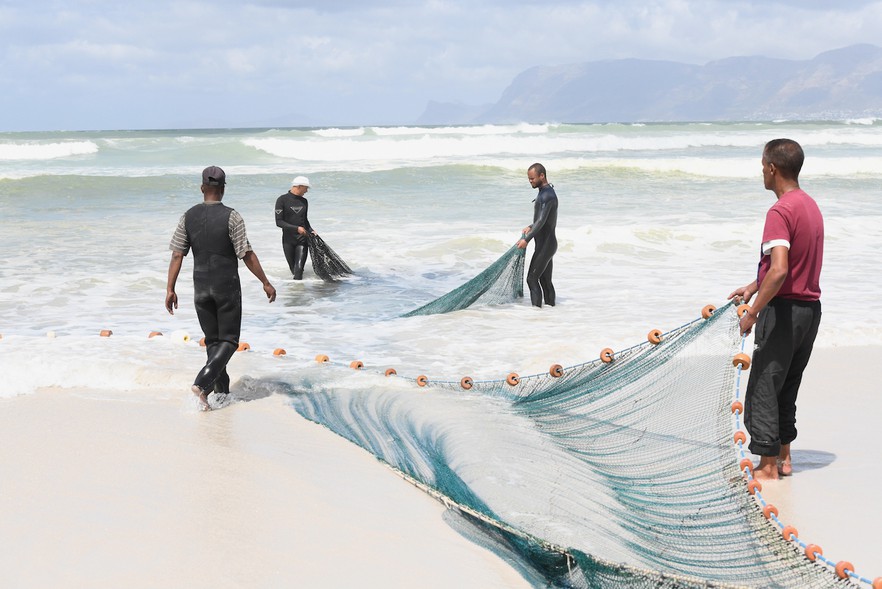 The net with the catch is finally pulled in. The fishers are experienced; they can quickly determine if it’s an interesting catch and enough to give them a wage for the day. But at times all they find is a few harders, one or two cobs, maybe a sand shark or a stingray, and lots of plastic and rubbish. 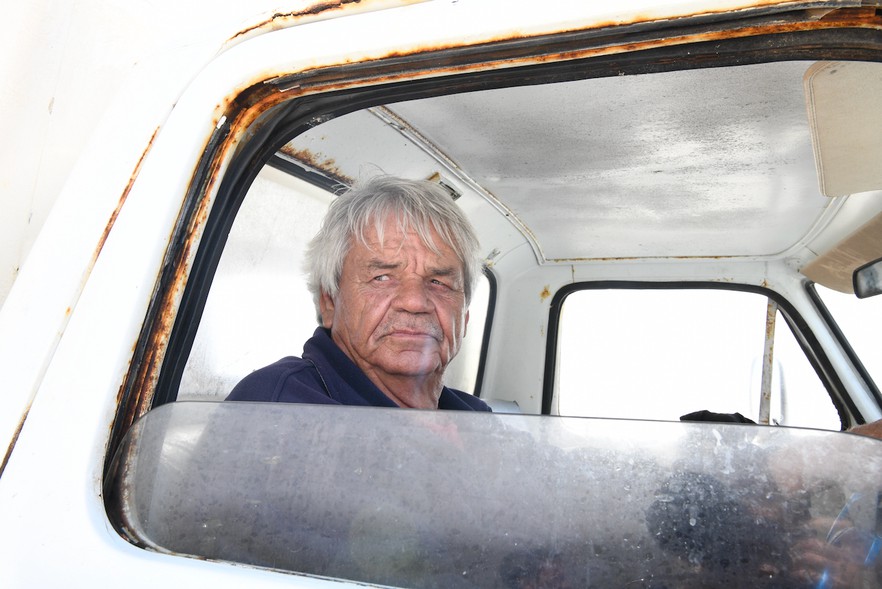 Johannes “Nartje” Derkse van Schalkwyk keeps a sharp eye on the proceedings from his truck. He is an experienced fisherman and manages the crew and the trekking. They gather at his house in the morning when the spotter has called to inform Nartje that trekking is on. Sometimes Nartje rows himself.

Afterwards, he shares the proceeds of the fish sale, if there is any, with the fishers. They also get fish which they can sell directly.

The truck, boat and the nets belong to Jeffrey Petty, an elderly fisherman, who built the boat himself in the 1960s. Over the years he made changes and improvements to the boat with help from Anthony Baron, one of the fishermen. 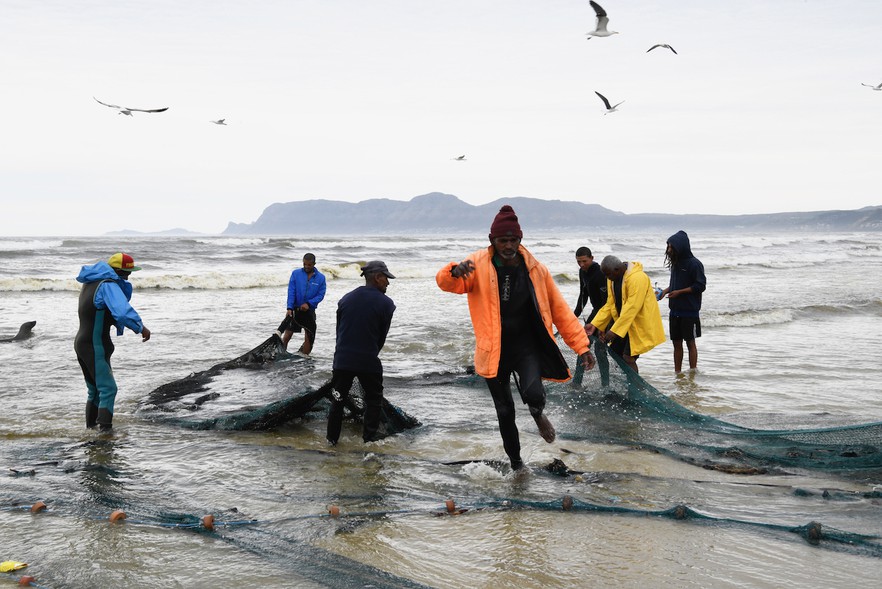 The crew pull in the last part of the net, the part which holds the catch – this time, not much. The seal has had its meal and knows it is no longer able to get back into the net. The fisherman in the foreground in orange jacket is Walter Baily. 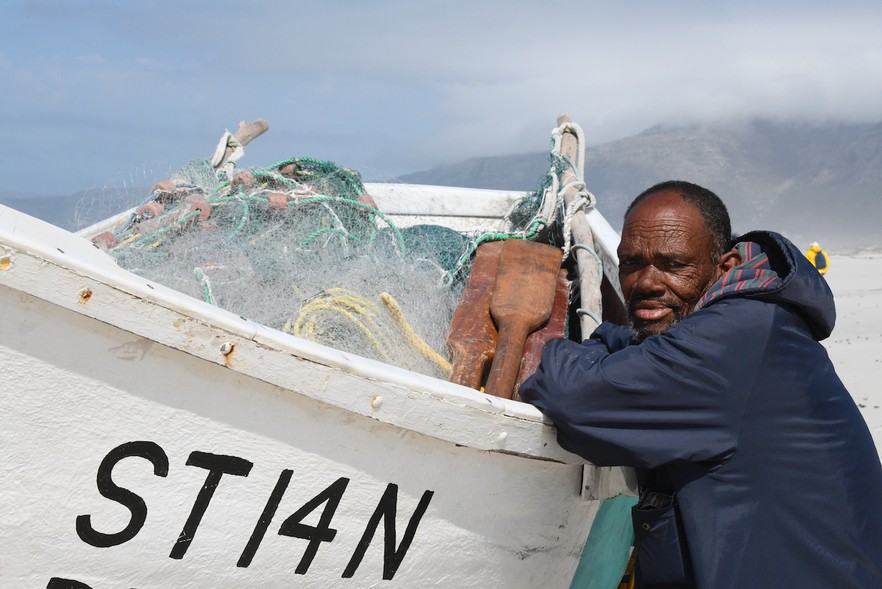 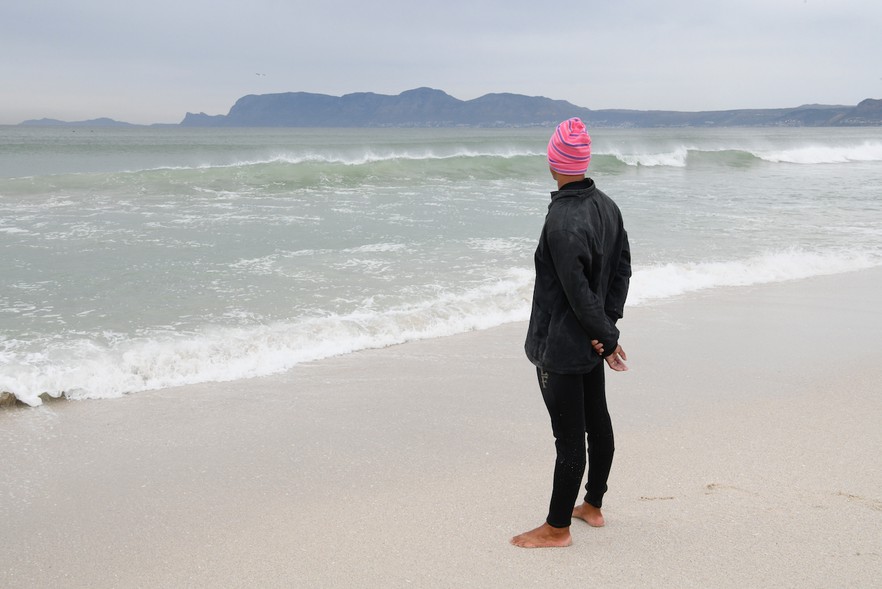 Quinton “Boere” Hendricks stares out over the sea. It’s too clean, no fish.

The trekkers never know for sure if they will get a good catch. Sometimes they will wait a long time on the beach, checking out the sea and eventually decide it’s not worth their while to take out the boat. They will have waited in vain and not made any money that day. Perhaps they’ll look for white mussels to sell.

Crews consist of 15 to 25 fishers. They still manage to catch a fair amount of fish, but these days much less because of the big trawlers that go out at night.

Rules and regulations, and restricting the allotted stretch of beach where the Trekkers are allowed to fish, has greatly limited them. In the 1970s there were over 80 trekker crews; now there are only four crews left.

Next:  Addo shut down by protests

Please note that this article is published under exclusive license and not under GroundUp's usual Creative Commons license.