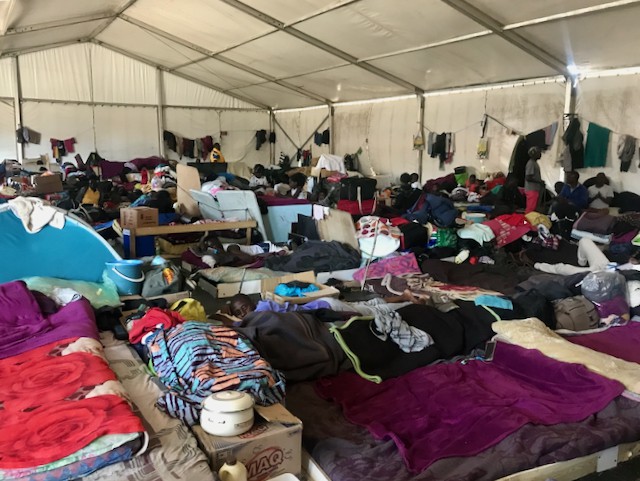 Public Works removed toilets and showers at the Bellville site on 9 November even though there are still about 630 people in the camp, of whom 280 are children. Photo: Tariro Washinyira

The City of Cape Town has warned the national Department of Public Works (DPW) that the department is in contravention of the City’s environmental health by-laws.

“This follows the DPW’s unilateral attempts to withdraw sanitation facilities and evict refugees from the Paint City site in Bellville, unlawfully and without a court order,” the City said in a statement on Tuesday.

Public Works removed toilets and showers at the Bellville site on 9 November, even though there are still about 630 people in the camp, of whom 280 are children.

GroundUp has seen video footage which the refugees recorded of themselves negotiating with an unnamed man who had come to remove the tent last week. The man said he’d travelled from Bloemfontein. “My boss got a call that he should remove the tent and that the place is empty,” he said.

On 8 April, GroundUp reported that at the outset the City, Home Affairs and Public Works disagreed on the choice of the Paint City site in Bellville on City-owned land.

Refugee leader Hafiz Mohammed said United Nations High Commissioner for Refugees (UNHCR) officials had visited the Belville site on Monday after its spokesperson, Kate Pond, said last week that the UNHCR would provide “sanitation and hygiene services in the site for a period of three months”

The City also said it is burdened with the costs of marquee tents at the other refugee camp at Wingfield (Kensington). “Neither the DPW nor National Treasury have identified any legal mandate whatsoever to justify why the City should cover costs as a result of Home Affairs’ ongoing failure to conclude their legal duties on repatriation. The law is clear that refugees are managed in terms of the Refugees Act, which falls within the mandate of the Minister of Home Affairs.”

Next:  PRASA has R23 billion in unspent capital