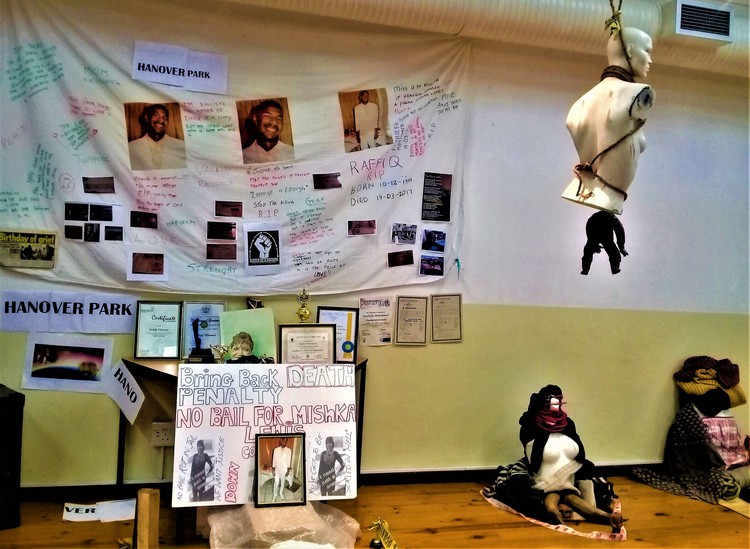 Some of the artwork on display at Community House in Salt River this week. The art installations were created by women activists who were nominated into the Cape Flats Women Alumni for the work they do in their communities. Photo: Marecia Damons

Resilience, selflessness and fighting for a community despite your own adversities are just some of the characteristics shared by 20 women activists in Cape Town nominated into the Cape Flats Women Alumni initiative.

“These women are resilient fighters in their communities. They never get time to debrief, or time out for themselves. We need them in communities to keep things together. This week is to allow them to deal with their own pain, challenges and struggles,” says Roegshanda Pascoe, chairperson of the Manenberg Safety Forum.

The initiative was launched by the Forum and an organisation called the Global Initiative, on Monday, to “give more recognition and support” to women who have been working tirelessly in efforts to combat violence and gangsterism on the Cape Flats. The 20 nominees are expected to participate in a week-long programme. They share their experiences through art, literature and discussions. The event is expected to end with a gala awards night on Saturday.

Pascoe said the initiative also hopes to help the activists deal with past trauma and get counselling which is not always available to those working in poor communities. In March 2019, Pascoe who is known for her activism against gang violence in Manenberg, was forced to flee her home with her children and grandchildren after her home was attacked by gunmen. She had been resisting threats from gangsters by choosing to testify in a murder trial. Her family had to uproot their lives to move into a safe house for the duration of the hearing.

Pascoe said the aim of the initiative is also to encourage women from different communities to support each other. Seven of the total nominees were selected by their communities. Pascoe said they initially nominated female activists they believed deserved more recognition for their efforts to combat challenges relating to crime and violence in their surroundings.

However, Pascoe said that a lot of deserving women would not have been nominated because a lot of their work in the community goes unnoticed. She then selected the remaining 13 nominees.

Mfuleni-based activist and nominee Thilda Jack-Yoppe said: “I have been doing activism for over 21 years. It has not been easy. We often don’t get a single penny for the work we do. [Pascoe] has given us a spotlight so that our community can also see what we are doing.”

SA Human Rights Commissioner Chris Nissen who attended the launch, said that it was disappointing that residents in Nyanga, Manenberg, Hanover Park, and Bishop Lavis are “still combating crime, having to pick up dead bodies, and looking for missing children” while “the murderers are not brought to book”.

The artwork created by the women will remain on display at Community House in Salt River for the week.

Next:  City of Cape Town in spat with Public Works over refugee camp