Land occupiers say they want water, toilets and electricity, but the City of Cape Town says the land is not suitable 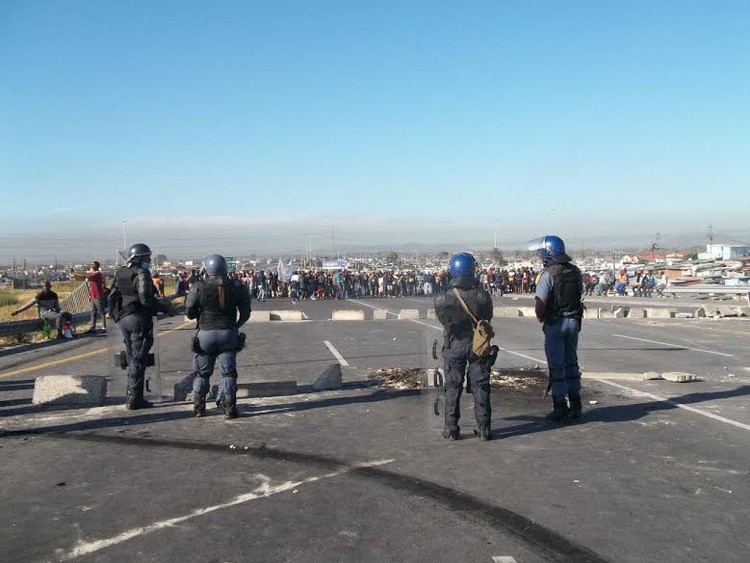 A police officer grabbed a tyre from the protesters, prompting one to shout: “Shoot us. Where is the mayor?”

On Baden Powell Drive, near Empolweni informal settlement, two buses and a truck on Baden Powell were set alight, according to City of Cape Town Law Enforcement spokesperson Wayne Dyson.

A Golden Arrow spokesperson said three buses were set alight, but no injuries had been reported.

“The police fired rubber bullets at us and struck a limping, elderly man in the eye as he was making his way to a nearby farm. He was not even participating in the protest,” said protester Bathandwa Gali.

Gali said: “We are not burning government building, buses and cars. We are just burning tyres to get attention.”

Sub-council 10 chairperson Patrick Mngxunyeni tried to calm the protesters. “I’m trying to facilitate a meeting between the residents and the mayor,” he said. “We have been trying vainly to get the City of Cape Town to respond to their demands. Rather than wait for the response, we now want them to go straight to the mayor.”

Mngxunyeni said the protest had affected local businesses and prevented residents from going to work outside Khayelitsha.

About two weeks ago the land occupiers protested outside the sub-council offices at Khayelitsha Training Centre, demanding water, toilets and electricity.

“It breaks our hearts to see our kids struggle to find a place to relieve themselves and water to wash their hands during the coronavirus pandemic,” said community leader Siphiwo Sopili. “When we complain about lack of water, the City says we are out of order.”

Western Cape Education Department’s Bronagh Hammond said the violent demonstrations had affected major routes to various schools. “The WCED is very concerned about the candidates that are experiencing difficulty in getting to their exam centres as a result of protest action affecting various traffic routes,” she said. “Our concern is the Grade 12 learners who are writing mathematics today.”

“We appeal to communities to consider the candidates and their futures. They have been through so much this year, and such actions have extreme consequences for these learners,” she said.

Community leader Bongile Zanazo said: “Our protest is a success. By shutting down the key roads, we have disrupted economic activity here.”

“Even business owners could not travel down N2 to the airport to catch their flights today. We disrupt economic activity because that’s where our protests hurt the City most,” he said.

Community leader Mabhelandile Twani said Intlungu Yasematyotyombeni Movement (The plight of shack dwellers), a new organisation set up to push for the provision of basic services in the newly occupied areas, had organised the shutdown of Khayelitsha.

“Our demands for water, toilets and electricity are not answered,” he said. “We protested at Thusong Community Centre, Khayelitsha Training Centre and Khayelitsha Administrative Offices, but it turned out that we spoke to the deaf,” he said.

Twani vowed that the protesters would shut down all the City offices in Khayelitsha. “We shut down the roads so that the business community complains to the City and force it to heed our demands. It’s been six months now without water, toilets and electricity. We see ourselves treated as outsiders or not people who belong to South Africa. We are treated as animals, under a difficult period of corona.”

Councillor Malusi Booi, Mayoral Committee Member for Human Settlements, said the City had explained “for months” that it could not “provide immediate services, if at all” to all newly formed settlements at the expense of the existing services and budgeted programmes. “The City does not have unlimited resources,” he said.

Booi said most of the land occupations were in places which were not suitable for habitation, such as flood-prone wetlands, low-lying areas, “and even in water retention ponds or on the slope of loose, sandy, nature reserve land that will get eroded by wind”.

“The City has repeatedly advised people not to settle in these areas.”

“While we respect the right of people to protest peacefully, the City of Cape Town will not tolerate intimidation, violence and the destruction of public and private property and the infringements of rights of law-abiding residents in general,” Booi said.

Western Cape police spokesperson Sergeant Noloyiso Rwexana confirmed that “about three buses and a truck” were burned. No arrests had been made, she said.