The project is expected to deliver water to more than 5,000 households whose taps ran dry several years ago 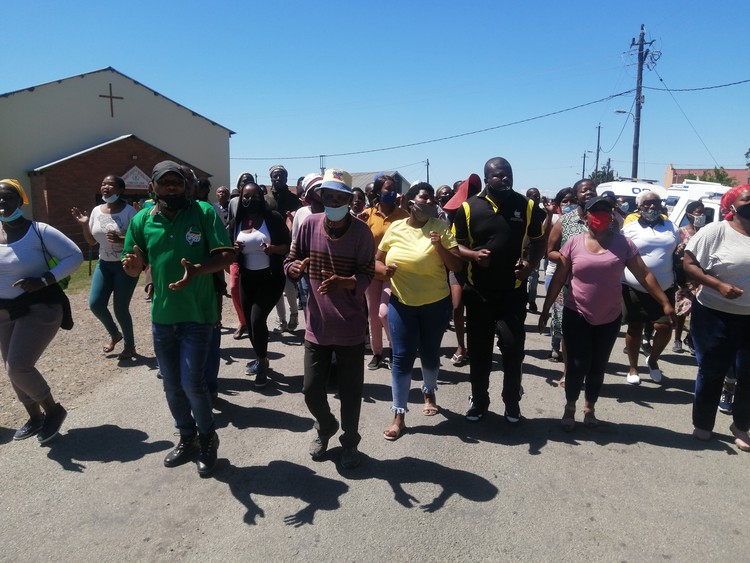 The community of Alexandria in the Eastern Cape are demanding answers over an incomplete water pipeline project being managed by Amatola Water. The project was expected to be completed by 2015. Photo: Mkhuseli Sizani

Scores of Alexandria residents under the Ndlambe Local Municipality held a peaceful march over the failed R179-million Bulk Potable Supply Pipeline from Cannon Rocks to Alexandria in the Eastern Cape on Thursday.

The march was led by ANC councillors with police and traffic escorts. Residents were unhappy with Amatola Water’s failure to deliver water to more than 5,000 households.

The pipeline project was approved in 2011 by then Minister of Water and Environmental Affairs Edna Molewa. Amatola Water is an implementing agent and was expected to finish the project by 2015.

The group handed over a memorandum to Council Speaker Nonkululeko Mapapu, whom they accused of inaction regarding the project. Mapapu was given 14 working days to respond. Residents promised to return in force should no response be given.

Ward 1 PR councillor Monica Mateti said two weeks ago residents asked them about progress on the project as they had been promised to have water years ago. “We told them that we have been back and forth with the Amatola and municipality. We then decided to do this peaceful march with the residents so that they can see that the problem is not with us,” she said.

Mateti said residents have been living with water restrictions since 2006, which has also caused a backlog of housing delivery in the area. “We have been living in Day Zero for the last five years because the upper areas depend on the water that is delivered by two municipal trucks. We want three megalitres for human consumption and developments … Currently we only have 1.2 megalitres.”

Mateti said the pipeline project was a failure due to shoddy workmanship. “Late Minister Molewa approved the construction of two water reservoirs, a pump station and laying of pipes. But every time the pipes were tested, they burst. Amotola then, instead of PVC pipes, used fiberglass pipes. Also no water valves were installed in between,” she said.

“Two weeks ago we were told by Amatola that the tender to finish the project was out but no company met the requirements. We were also told there is a new manager who is trying to settle in. The whole project is frustrating us,” Mateti said.

Resident Nombuyiselo Magwala, 64, lives with seven family members. He said their toilet stank and overflowed because there is no water to flush it. “For funerals it becomes worse. The water that the trucks deliver is not enough and we end up not washing our hands as Covid-19 regulations require,” he said.

Council Speaker Mapapu told the angry residents: “The problem is not with the municipality. This is Amatola’s project and I will take this memorandum to them so that they can come and address you.”

Next:  Motorcade through Cape Town to highlight gender-based violence