Minister expresses displeasure with Lottery’s own investigation into controversial grant

Ebrahim Patel, the recently-appointed Minister of Trade and Industry, has asked the National Lotteries Commission to pursue a “criminal case” in connection with a controversial R27.5-million Lottery grant awarded to construct a drug rehabilitation centre near Pretoria.

The money was paid to Denzhe Primary Healthcare, a hijacked NPO controlled by controversial Pretoria lawyer Lesley Ramulifho. Patel has asked the NLC to recover the money.

Over R20 million of the Lottery’s grant for this “proactively funded” project is unaccounted for and the rehab centre is the subject of ongoing litigation. The centre is shoddily built and is still incomplete almost three years later.

Leaked bank statements show several strange payments from the NPO’s account, including over R535,240 paid towards two Ocean Basket franchises purchased by Ramulifho. He has since claimed that the money was a “loan” – a clear transgression of the terms of Lottery funding – and has been repaid.

Significantly, Patel has also asked the NLC to provide the Department of Trade and Industry (DTI) with a list of all approved proactive funding projects for 2016, 2017 and 2018. In terms of a 2015 amendment to the Lotteries Act the DTI Minister, the NLC or its board can identify a need and decide to fund it before receiving a grant application.

Evidence uncovered by GroundUp as part of an ongoing investigation into Lottery funding has revealed widespread abuse of the proactive funding model. Last year Parliament’s Trade and Industry Committee asked the minister to investigate its use. The DA called it a “slush fund” to enrich a few people, during the same committee meeting.

GroundUp also revealed how Upbrand Properties, a company in which NLC Chief Operating Officer Phillemon Letwaba’s brother, Johannes, was the sole director, received a R15 million contact to build the Pretoria rehab. He subsequently resigned as a director. The NLC later said that it had investigated and had not found any conflict of interest on the part of any of its employees.

But, based on the Minister’s letter, it is clear that the NLC investigation did not even do the basic step of a Companies and Intellectual Properties (CIPC) search to check Johannes Letwaba’s status in Upbrand at the time the contract was signed.

In May this year, and under pressure over revelations of fraud and corruption involved in Lottery grants, the then Minister of Trade and Industry Rob Davies instructed the NLC to investigate.

In his letter, dated August 14, and addressed to Professor Alfred Nevhutanda, the NLC’s Board chairman – and copied to NLC Commissioner Thabang Mampane – Patel raised several serious concerns about the investigation.

Based on Patel’s letter, the investigation appears to have been superficial and failed to look at several critical issues.

“The DTI reviewed the revised forensic report received on May 9, 2019, and notes that certain shortcomings were not addressed,” the Minister told Nevhutanda.

Given the “seriousness” of the allegations, Patel said, he had several concerns that needed to be urgently addressed.

One of these was that Ado Krige, the owner of an existing for-profit drug rehabilitation centre which was demolished and replaced by a new facility, was never interviewed. “Mr. Ado Krige should be interviewed to obtain his version of events as failure to do so is contrary to the principal of ‘audi alteram partem’ (hear the other party).”

Patel also expressed concern that the investigators “did not engage with the CIPC to obtain evidence relating to the resignation of Mr. Johannes Letwaba as a director of Upbrand.”

Krige confirmed that DTI investigators had visited him earlier this week and questioned him about the rehab and the Lottery funding. “But this thing is very sensitive, and I’d prefer not to say anything more for the moment.”

Recommending that the NLC take steps to recover funds paid to Denzhe, Patel wrote: “In view of the two forensic investigation reports from your independent investigators, and in light of the investigation outcome, it is evident that the proactive funding was not used for the intended purpose. The outcome of the investigation is without evidence that the drug rehabilitation centre was completed.”

He continued: “In the spirit of good governance, I thus recommend recovery of the funds paid to Denzhe and the pursuit of a criminal case in line with … the PMFA (Public Finance Management Act).” 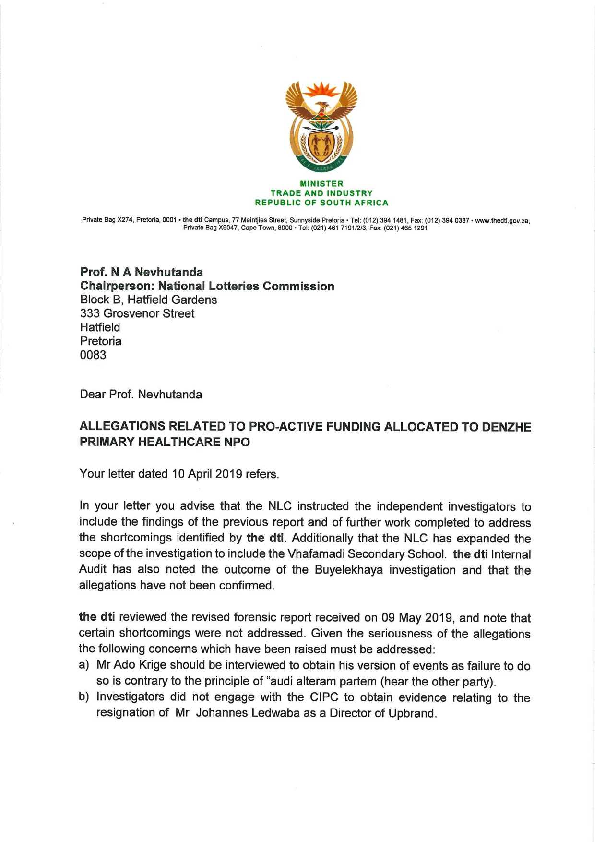 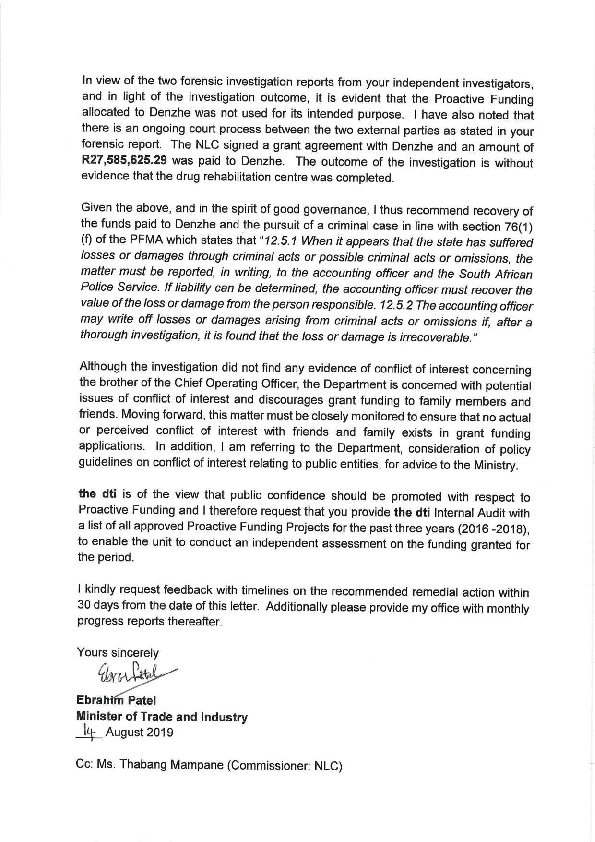 Letter by Ebrahim Patel to chairperson of the NLC.

Next:  “Proper shelter can change a person completely”