“People are bored of sitting at home doing nothing” 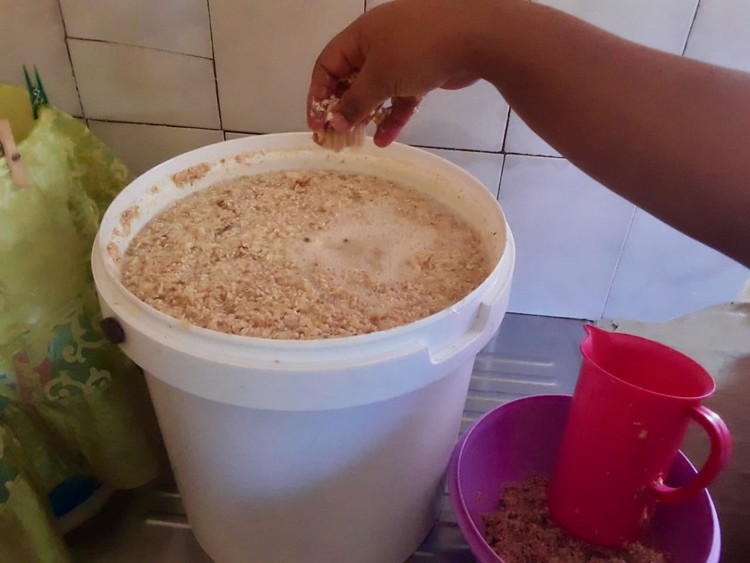 With the sale of alcohol banned for over seven weeks, the illegal booze trade has mushroomed and prices rocketed. People who used to frequent shebeens in the southern Cape, say syndicates have stepped in and are charging exorbitant prices for conventional brands of alcohol. In response, people have started to brew their own liquor at home. Pineapples and apples are used mostly.

On the south coast, many people are now making a living from it, brewing up 25-litre buckets of iqhilika in places such as Nekkies in Knysna, Nonqaba in Mosselbay, Nokuthula in Plettenberg Bay, and Lawaaikamp and Thembalethu near George.

The home-brewed alcohol sells for about R10 a litre or R20 for a 2.5-litre bottle. In contrast, Zola Xhinwa, of Nokuthula, says a bottle of Smirnoff vodka is now going for R450 and beer prices have doubled, even trebled.

“I have resorted to drinking homemade booze because it’s much cheaper and affordable,” he said.

Pineapple alcohol is made with sliced pineapple, lukewarm water, brown bread, oats, ginger, yeast and sugar. Apple beer is a concoction of teabags, sugar, yeast and brown bread. The ingredients are left to ferment overnight.

A popular drinking spot in Nonqaba, that dates back to the 1950s, has become known for its cleanliness and the pleasant taste of its pineapple brew.

“Lockdown has actually taken us back to dark days [of apartheid], where people made alcohol from home and sold to community members,” says the owner [name withheld].

“I make sure that l don’t get in close contact with my customers. I wear gloves and mask and sell through the burglar door.”

“This township is dead without booze. People are bored of sitting at home doing nothing. People don’t sit here, they just buy and go drink in their homes,” she says.

Another seller in Nekkies, Knysna, said that at first she only brewed for her family, but everyone in the area now wants her booze. “People don’t have money to buy expensive backdoor alcohol … We just pray that the government suspends the lockdown so that people can return to their favourite booze.”

Thembalethu police spokesperson Captain Dumile Gwavu said that selling and brewing of alcohol during the Covid-19 national lockdown is a criminal offence.