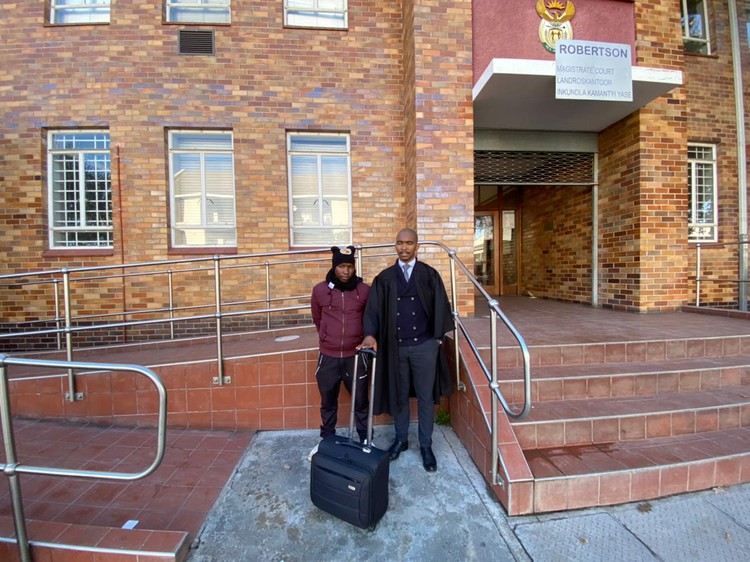 Malizo Kwinana of the Rural Legal Centre and his attorney Asenati Tukela outside the Magistrates Court in Robertson where he reached a settlement agreement with two farmers. They agreed to drop cases of harrassment against him if he apologised to them on social media. Photo: Supplied by the Trust for Community Outreach and Education

An activist with the Rural Legal Centre in Robertson has apologised to two farmers on social media as part of a settlement agreement after the farmers took him to court for harassment.

The parties came to a settlement on Friday 4 June, agreeing that if Malizo Kwinana apologises to the two farmers on social media, they would withdraw the court cases.

According to the agreement, Kwinana was not “admitting any guilt and only as a way of settling the matter” but would “undertake not to harass [the farmers] in the future”.

Farmer Theunis Swanepoel of Appelsdrift Farm applied for a protection order against Kwinana and the Rural Legal Centre in March 2020, after Kwinana accused him via email of illegally evicting people from his farm.

Similarly, Wilhelm De Kock of De Kock Boerdery filed an application to court in July 2020, stating that Kwinana sent various emails defaming him and his business by making “unfounded and untrue” allegations about not complying with labour conditions, illegally evicting people from his farm, and not complying with lockdown regulations.

De Kock also said in his founding affidavit that Kwinana had also made the allegations on his Facebook page. One allegation claimed that De Kock unfairly dismissed his employees “in order to use labour broker workers from Covid-19 infected areas”.

“The said unfounded and untrue post attracted numerous negative reactions from the public followers of [Kwinana] on Facebook, defaming my farm and my personal good name,” the affidavit read.

He had asked the court to grant a protection order on the basis of harassment and that “economic harm may be suffered” as a result of Kwinana’s conduct.

Attorney Asenati Tukela, for Kwinana, said that they viewed the agreements as a “reasonable settlement”. He said that if the protection orders were granted by the court, it would mean that Kwinana couldn’t engage with the farmers over farm workers’ issues in the future. “A settlement would solve that concern,” said Tukela.

Each of the parties was ordered to pay their own legal costs.

Previous:  Can the vaccine rollout be sped up?