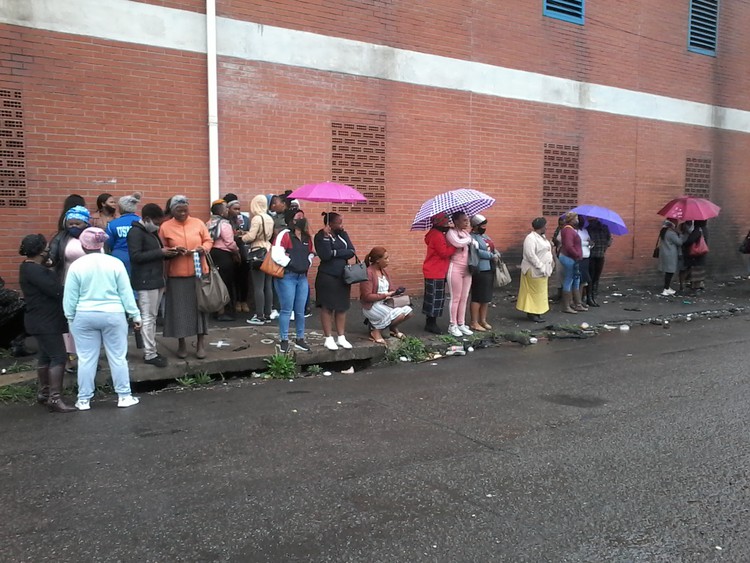 Workers standing outside Hanes, formerly known as Playtex, based in Jacobs, Durban last week where they again demanded their unpaid Covid-19 relief funds. This follows the dismissal of 73 workers last month who also participated in a strike for unpaid TERS funds. Photo: Nokulunga Majola

The Southern African Clothing and Textiles Workers Union (SACTWU) is challenging the dismissal of about 73 workers following a protest over unpaid Covid-19 relief funds.

The workers were employed at Hanes South Africa, formerly known as Playtex based in Jacobs, Durban. The dismissed workers say they are not able to access any UIF benefits because the system at the Department of Labour still shows that they are employed by the company.

The 73 workers say their trouble started after they participated in protests alongside 700 of their colleagues on 23 and 24 June over unpaid UIF Covid-19 relief funds.

Nkululeko Mavimbela from uMlazi said he received a dismissal letter on 14 August for his participation in the protest. When he applied for UIF while looking for another job, he was shocked when his application was rejected.

“We were fighting for what is rightfully ours and got fired for it. How is that fair? I am not against us getting fired but I am not happy that we cannot apply for UIF,” said Mavimbela. He said life has been difficult with very little prospects of finding a job during lockdown.

Gugu Nkosi from KwaMashu, who was also dismissed, said: “It is frustrating that we all got warnings but only 73 of us were fired. We don’t have means to survive or even put food on the table, the company must do something about this because we have families to feed.”

In a statement, the company said all of its 800 employees who participated in the “illegal and unprotected” strike in June were given written warnings. It said 73 of those employees were dismissed for “gross misconduct” that included “incitement, intimidation and destruction of company property following a thorough investigation and a hearing held on 30 July”.

The company said union representatives took the dismissals to the Bargaining Council where a conciliation meeting was held on 14 September. “Because no resolution was achieved during this meeting, the matter has now proceeded to arbitration with a date still to be set,” the company said.

Hanes South Africa also said that the UIF TERS funds for June have still not been processed or paid and therefore it was out of their hands. It confirmed that the dismissed employees indeed still appeared in the UIF system as “pending” to receive claimed amounts for UIF TERS.

“Like many companies, Hanes has been impacted severely by the Covid-19 lockdown and the subsequent negative impact on the economy. Regrettably, these latest incidents have made it even more difficult for this company to recover,” Hanes said.

André Kriel, general secretary of SACTWU confirmed that the matter was set for arbitration.

With regard to the unpaid UIF Covid-19 relief funds, Kriel said they are pursuing the outstanding payments directly with the UIF head office. “We are making good progress on this matter. Unfortunately the publicly known delays at the UIF is a matter which is not within our direct control.” He said that as far as he was aware, the workers have been paid the UIF funds which the company had received up until May.

“We will raise the blockage of those workers who are not able to apply for their UIF, directly with the [Fund]. However, we will need to do so in a manner which does not prejudice our legal claim that these employees were unfairly dismissed, in the first instance,” Kriel said.

Open letter to City of Cape Town: Fix our vleis!

Elderly getting Covid vaccine have message for young people