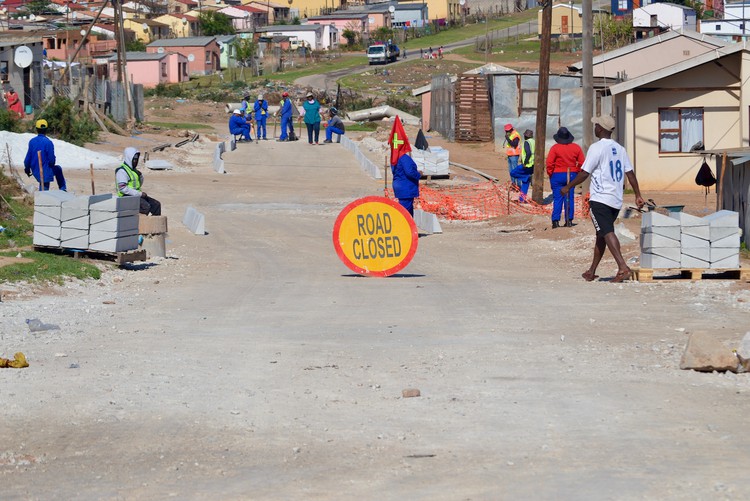 A Uitenhage councillor has vowed to exclude ward committee members from projects, such as this paving contract, because of infighting. Photo: Thamsanqa Mbovane

Ward 47 committee member Luxolo Ncethezo and community leader Freedom Ngcambe have accused Uitenhage Councillor Nontuthuzelo Skweyiya (ANC) of withholding funds for a paving project for herself and her business forum. They have threatened to close down the R1.2 million project to pave Siwani Street in Peace Village, KwaNobuhle.

When tensions erupted over the project in February, streets leading to the graveyard were shut down to stop funeral processions as a form of protest.

Resident Yoli Tom said: “On Tuesday evening, a couple of ward committee leaders urged us to close the project after their argument with the councillor, but we said no … We really need this street with immediate effect. We told them we won’t’ be part of the brawl between themselves and the councillor.”

Tom said the street is unusable when it rains.

The project has been fraught with problems. After it started in June last year, it came to a halt a few months later in October.

Ncethezo said the original plan was to pave 200 metres of Siwani Street, but now only 156 metres will be paved. “We will approach the office of the Speaker because we know the councillor and a group of people calling themselves a business [forum] are involved in corruption in this ward.”

Ncethezo insists that 25% of the project was meant to be given to a local business and he wants to know where the money has gone. He said that Skweyiya has now blocked him from access to her office.

But ward 47 business forum deputy chairperson Bongani Boyana said there is no such allocation for this project. “The project was initially done by the construction division of the municipality who had only a R51,000 budget for the job of [local] supervisor … We agreed to rather employ ten people in the community.”

The job is currently being done by a private contractor who is now employing the ten people who had worked for the construction division of the municipality, according to Boyana.

Skweyiya said: “In the past the projects used to start with meetings between myself and the ward committee, especially Luxolo Ncethezo. But I discovered most of the ten ward committee leaders were fighting about the projects so I have now decided no more involving them again.”

Next:  73 workers dismissed for protest over unpaid Covid-19 relief funds