Just 3,500 people – 0.01% of the adult population – own 15% of total wealth in South Africa, according to a new study. And, there has been no decrease in wealth inequality in the 26 years since democracy.

South Africa is one of the most unequal countries in the world in terms of wealth, according to the preliminary findings of a paper by Aroop Chatterjee, Léo Czajka, and Amory Gethin. Chatterjee is at Wits University’s Southern Centre for Inequality Studies, Czajka is at the Université Catholique de Louvain in Belgium, and Amory Gethin is at the World Inequality Lab based at the Paris School of Economics.

Presenting their paper Measuring the distribution of household wealth in South Africa at the University of Cape Town on 4 March, Gethin described the novel methods he and his co-authors used to calculate wealth distribution, a notoriously elusive quantity, and showed that wealth inequality in South Africa not only greatly exceeds income inequality, but has not declined since 1994.

Their preliminary findings show a steep pyramid of wealth:

Economists have typically relied on income inequality when attempting to describe economic inequality within a country. Incomes are most often understood as the money people receive from their employers or from contracts, but income can also come from dividends from stocks, rentals, or other compensation, such as court settlements. Income inequality is an important factor, reflecting the flow of money to different people.

Inequality of wealth, in contrast to inequality of income, became the focus of economists partly as a response to Thomas Piketty’s Capital in the Twenty-First Century. This work described how the incomes of the top 1% of people in the world had been growing at a much higher rate than the bottom 99% since the 1980s.

But the focus on income (rather than wealth) has shortcomings, as Chatterjee, in a 2019 paper, pointed out: “Those with a higher starting level of wealth are able to build wealth quicker than those with lower or no wealth to begin with, leading to increasing wealth inequality.”

The trouble for economic researchers is that wealth controlled by a person or people is difficult to quantify. Wealth hides in plain sight. Unlike income, which is more easily captured by tax statistics, economists cannot easily observe wealth directly.

Leaks such as the Panama Papers revealed a glimpse of the labyrinths used by the elite to keep wealth from view of governments and others.

In recent years, a number of measures of South Africa’s wealth distribution have emerged.

But Orthofer’s study did not account for home ownership, and made strong assumptions about pensions, and so her study tended to overestimate inequality, say Chatterjee, Czajka, and Gethin. Sulla and Zikhali’s calculations, on the other hand, tended to underestimate inequality because they relied on survey data, which often does not tend to capture the wealth of the elite.

Chatterjee, Czajka, and Gethin’s tried to bridge the gap between macroeconomic data (for the economy as a whole) and microeconomic data (for individual actors within an economy). Where necessary they used flows of income such as interest income or dividends, to establish the capital that lies behind these flows – a process called “income capitalisation”. Though they say the method is not foolproof, partly because as much as 50% of South Africa’s bonds and corporate shares is estimated to be hidden in trusts, their work corrects for many of the usual traps that can lead to over- or under-estimation of wealth.

Extending their method backwards to 1993 shows that wealth inequality has remained at largely the same level, or increased slightly.

Chatterjee, Czajka, and Gethin’s approach allows wealth inequality in South Africa to be reasonably compared to other countries through the World Inequality Database. This tracks inequality measures, including wealth, using standardised methods across a growing number of countries. South Africa has by far the most unequal distribution of wealth, with the USA a distant second. Chatterjee, Czajka, and Gethin conclude that “available data unanimously points to South Africa being one of the most unequal countries in the world, and even more so when looking at wealth rather than income.” 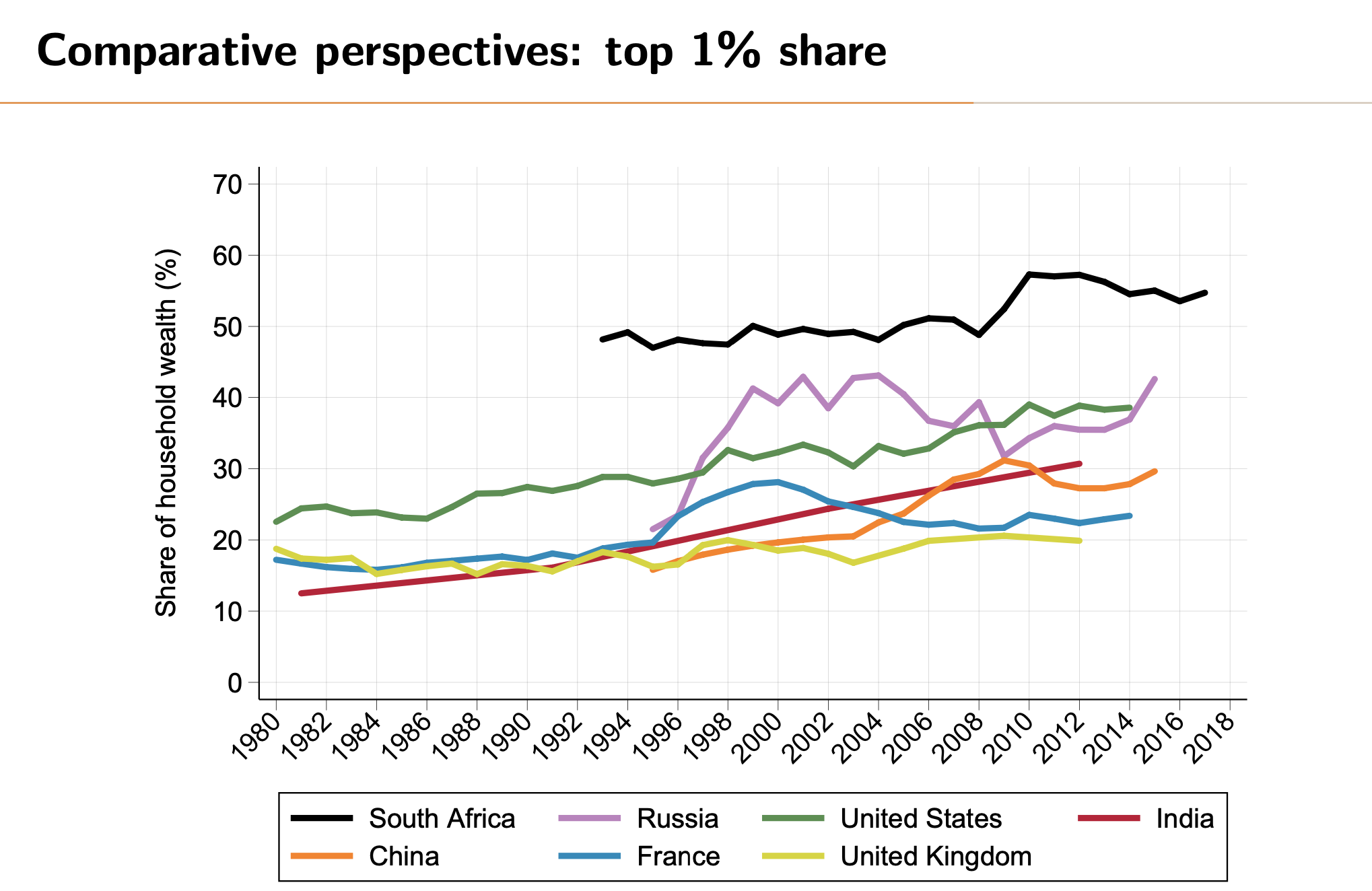 What always grates me with comparisons of this nature, is that the role population growth plays in keeping the masses poor and inequality high, is ignored or underplayed.

When a population grows from 38 million in 1994 to 58 million in 2020, as happened in SA, then inequality must grow. In such a scenario, no government and no economy can educate the newcomers and create jobs fast enough to prevent a drop in per capita income.

Articles about wealth inequality always insinuate the rich have something to do with the problem.

In fact, the problem is created and perpetuated by the high population growth rate. Something the wealthy have nothing to do with.

To solve a problem one must first properly and honestly identify the cause or causes (there are more).