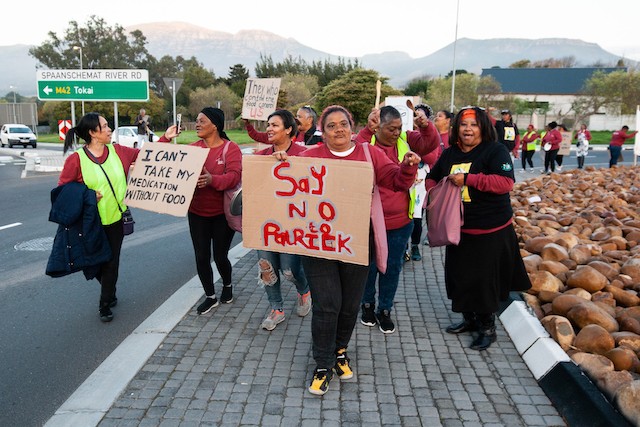 About 50 women from the Cape Flats held a picket at the Constantia traffic circle on Monday morning. The Womens Day protest was to raise awareness for food security, unemployment and violence against women. Photo: Ashraf Hendricks

Xoliswa Ngqola is a single mother of two children, aged ten and thirteen. She sometimes sends her children hungry to school. When they come home, she puts a pot of water on the stove to boil. They think their mom is busy cooking dinner. She tells them she’s cooking beans and it will take a long time. “That pot of water will cook the whole day until they fall asleep,” she says.

Ngqola is unemployed. She has been struggling to get ID documents for her children. As a result, the family does not receive child grants. She relies on her sister for support.

Ngqola joined about 50 women carrying empty plates and pots and placards, picketing at the Constantia traffic circle on Monday morning ahead of Women’s Day. A large banner placed on the circle read, “Empty promises, empty pots”. Another said: “Inequality is violence against women”. The protest was under the hashtag “#PatrickMustFall” – Patrick meaning the patriarchy.

“So many people are going hungry. So many women are struggling to keep abreast due to unemployment,” said Kashiefa Achmat, chairperson of the Housing Assembly for the Cape Flats.

Achmat said many families can’t buy staples such as mielie meal and rice. She said unused land in communities should be turned over to farming.

“There’s no job creation. Nothing is happening,” said Achmat.

Henrietta Abrahams, chairperson of the Bonteheuwel Development Forum, said they chose to protest in Constantia because “we want to come to the privileged and let them know that they are part of supporting the system of capitalism and of patriarchy making them feel safe and secure against us, the poor”.

“We’re here to explain to these people that there shouldn’t be a ‘them’ and an ‘us’ … Inequality is violent. Poverty is violent,“ said Abrahams.

The protest was arranged by various community-based organisations on the Cape Flats, including the Security & Safety Patrol Delft, the Housing Assembly, the Bonteheuwel Development Forum, Hope for the Future, and the Food Sovereignty Campaign.

Next:  Are judges crossing the line when they speak out?