Woman with concrete slab told her house is complete 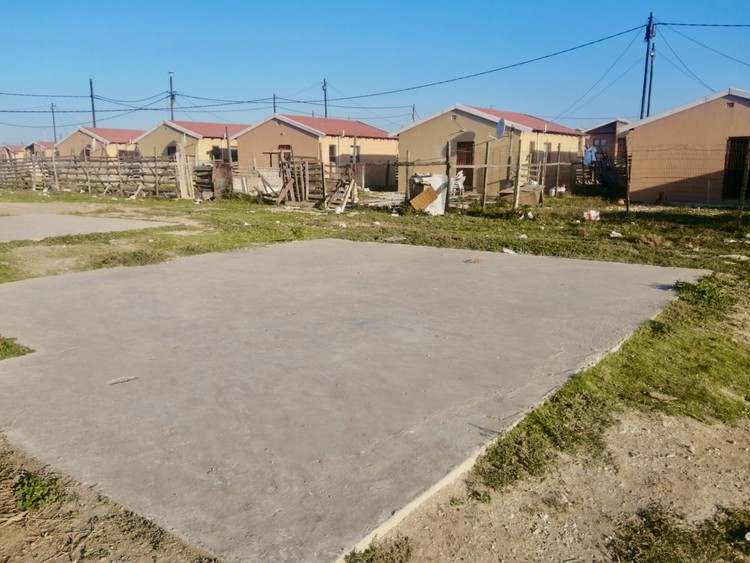 At GG’s Ground in Missionvale, about 250 cement foundations laid in 2014 are still waiting for houses. Photo: Mkhuseli Sizani

About 250 housing beneficiaries in the Missionvale RDP project in Port Elizabeth are still waiting for houses to be built on concrete foundation slabs laid in 2014. The project started in 2012 and was to be completed two years later.

In the end, 2,327 houses were built, but nearly one in five are not occupied by their legal beneficiaries.

Meanwhile, at GG’s Ground there are only cement foundations. As a result many people wait, living in shacks in Whittings Ground.

Charlene Tieman lives with her family of eight in a five-room shack. She had hoped her RDP house could be used by her parents. “Other people here have houses, including strangers to this area,” said Tieman.

Tieman said she went to the municipal human settlements offices last year to find out what was happening. “I was shocked to be shown a report from a computer that says my house was completely built. Both internal and external plumbing still needed to be done. I requested this report but the municipal official refused to give me a print out,” she said.

Nkuleko Mbusi said, “The ward committee and steering committee members said our RDP foundations were built in a waterlogged area.” He accused them of corruption and said they had redirected the building materials meant for his house.

“Since then I have been stuck in this three-room leaking shack with my three children … I am unemployed. I don’t even have money to fix this leaking roof,” he said.

Regarding the 250 slabs, Ward 31 Councillor Luyolo Nombola (ANC) said, “There are outstanding documents that the Department of Human Settlements require from the municipality in order for the project to be completed.” He refused to comment further.

Masiza Mazizi, spokesperson for Human Settlements MEC Nonkqubela Pieters, said, “The outstanding houses to be constructed in Missionvale are pending on the municipality to provide services before the department builds houses there. It is a requirement.”

Mazizi said that previously the municipality built many houses where there were no services. “Officials of the Department in the municipality have been communicating this matter as early as 2018. Nelson Mandela Bay has to assist in this regard so that services could be accelerated to the people of Missionvale, especially the most vulnerable and destitute,” said Mazizi.

Previous:  Can you guess the order these photos were taken?