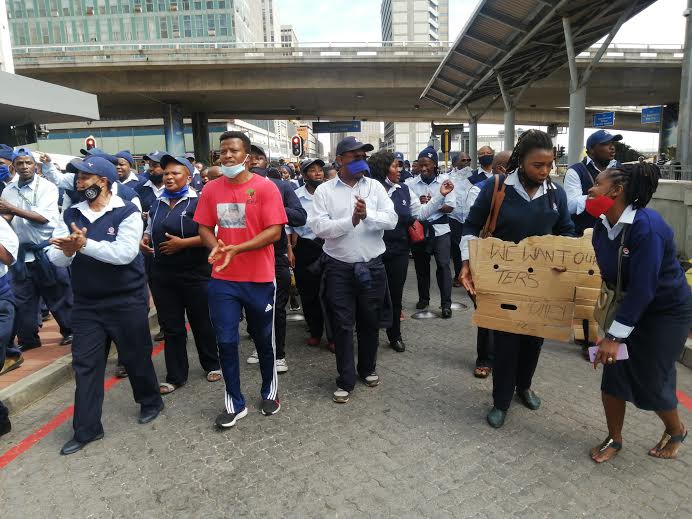 Algoa Bus Company drivers marched to the Gqeberha offices of the Department of Labour demanding money they say they are owed under the Covid-19 Temporary Employee Relief Scheme (TERS). Photo: Mkhuseli Sizani

The Gqeberha Department of Labour came to a halt on Tuesday morning for about an hour when about 100 Algoa Bus Company drivers marched to the offices and demanded money they say they are owed from the government’s Covid-19 Temporary Employee Relief Scheme (TERS). The workers claim that some were only paid for four months and others have not received a cent.

They wanted to know how much TERS was paid to the company and how much was distributed to the workers. Department of Labour deputy regional manager Mike Ngqolowa asked for 14 days to respond.

The march started at 9:30am when bus drivers met near the Gqeberha Main Post Office with Public Order Police escorting them. They arrived at 10:40am at the Department and services were disrupted for an hour. Taxis and other motorists who tried to disrupt the march were turned away.

The workers sat in Govan Mbeki Avenue and blocked traffic. They demanded to see management. Staff members shut the doors as the workers forged forward singing Asinamali (We have no money). They banged on the doors but Public Order Police intervened and barred the doors.

The march is a continuation of a 23 November protest at the Algoa Bus Company in Korsten Depot.

Zolile Mgaza, organiser of the bus drivers, said, “The workers are suffering because some were only paid for three or four months. We demand transparency. We don’t know how much was paid to the company or why we were only paid for a few months. We have worked short time since March last year and we can’t meet our budget. Our leave has not been paid. We want the Department to also address those issues.”

Zihlalele Mamkeli said, “Ever since March last year my salary has been cut by R800. I am struggling to feed my family of five. My children are struggling with stationery and lunch boxes because I can no longer meet my budget needs.”

Ngqolowa pleaded with the angry workers to give him time and promised to convene a meeting with the Algoa Bus company to find out how the money had been distributed. “You have a right to know, because both the company and you have contributed to the UIF.”

The workers agreed to wait for 14 days but vowed to come back and sit in, if their demands are not met.

This article originally said the workers had agreed to wait 21 days. This has been corrected to 14.

Next:  All students must be allowed to register, regardless of debt, say Wits protesters