South Africa’s failure to support the United Nations resolution calling for Russia to withdraw from Ukraine was a low-point in our foreign policy. 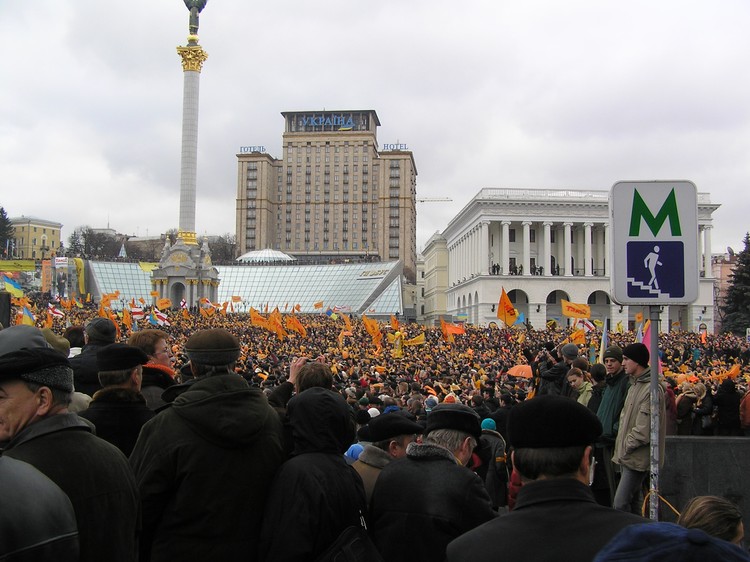 This photo was taken on the morning of the first day of the Orange Revolution in 2004. Ukrainians protested against an election mired in corruption. A new free and fair election was subsequently held. Russia has consistently undermined Ukrainian democracy, but the Ukrainian people have stood up for their rights. Photo: Wikimedia user Serhiy (CC BY-SA 3.0)

No person who thinks of themself as progressive, left, or pro-democracy can in good faith be neutral about Russia’s invasion of Ukraine. Russia faced no existential threat from Ukraine on 24 February, the European Union or even realistically from the United States.

This was an unprovoked war of aggression and imperial expansion. Tens of thousands of Ukrainian civilians and soldiers on both sides, most of them barely out of boyhood, have died. Large sections of Ukraine’s infrastructure are in tatters; city centres in the east have been destroyed.

Vladimir Putin and his officials have implicitly or explicitly threatened nuclear war several times since the invasion. Escalation to nuclear war will probably not happen, but the risk is substantial enough that it has to be taken extremely seriously.

Ukraine, like South Africa, is a flawed democracy. It is struggling, like us, with corruption and some ugly politics. But it is a democracy.

More than 90% of its population voted for independence from Russia in 1991. Ukraine has freedom of expression and freedom to organise politically. It has held several free and fair elections, albeit not in the Russian-controlled regions over the past eight years. It is distressing that some on the left underestimate the importance of these traditional freedoms and the desire of most Ukrainians to join the European Union. Perhaps they are blinded by their anger over Western hypocrisy. But two wrongs do not make a right.

Ukraine has more than its fair share of fascists and neo-Nazis, in the military too (as does Russia), but they are not the dominant faction in Ukrainian politics. And, if anything, Russia’s aggression strengthens their hand.

Russia is not a democracy. Its war is an attack on democracy. Besides undermining democracy in Ukraine, Russian imperialism is a threat to the Baltic democracies too. It is also causing economic misery and risks causing widespread hunger in Africa.

Russia’s invasion has also given NATO new momentum. Now facing a genuine existential threat from an unpredictable and extremely powerful military power, the governments of once-neutral Sweden and Finland see no alternative but to join NATO.

South Africa’s failure earlier this year to support the United Nations resolution calling for Russia to withdraw from Ukraine was a low-point in our foreign policy.

The excuse by South Africa’s ambassador to the UN, Mathu Joyini, that the resolution could drive a wedge between the parties betrayed a combination of naivety and expediency.

Naive because it is harder to think of a greater wedge than war.

Expedient because Russia under Vladimir Putin had a role in state capture, with the attempt to get us to agree to an unaffordable one trillion dollar energy deal (thankfully scuttled - it would have made stage six loadshedding seem a trifle). Russia may have tried to support the ANC in South African elections. Our ruling party doesn’t oppose Russia’s aggression, almost certainly, because top ANC bigwigs have close ties with the Putin regime.

There is a small act of solidarity with the people of Ukraine South Africans who are ashamed of their government’s response can take. We can donate to one of several institutions either providing humanitarian relief or — and I accept some may not feel comfortable going this far — directly to the military defence of Ukraine. (You can also support Medecins Sans Frontieres.)

What about America’s 2003 invasion of Iraq? It was done without UN security council authorisation. The invasion of Iraq also left the already fragile and frequently violated post-World War II consensus on inter-country invasions in tatters. At minimum hundreds of thousands of people have died because of the invasion. Russia has repeatedly pointed to this double-standard by the US and UK in response to criticism of the invasion of Ukraine.

What about Israel’s occupation of the Palestinian territories which is de facto supported by the US? Indeed the Israeli occupation is a stain on the consciences of many western governments who claim to stand for democracy and liberal values. But that also doesn’t justify Russia’s behaviour. I recommend donating to activists fighting to end Israeli oppression such as Al-Haq (don’t believe the Israeli propaganda about them). Again, for those of us who have frequently protested the Israeli occupation of the West Bank and choke-hold over Gaza, the consistent position is to condemn Russia too.

We’ve got huge political problems and poverty in South Africa. Shouldn’t one rather donate to South African causes? I agree that all people in South Africa who can afford to should donate to activist organisations and/or charities. But more than ever we live in an interconnected world where the actions of people in one country affect people continents away. Our government’s continued support of Russia can to a very limited extent be offset by a small donation to Ukrainian relief. That doesn’t preclude supporting South African causes.

Does an individual donation make any difference? Wars cost billions of dollars to execute. Medical care for the wounded is astronomical. The contribution of each one of us to Ukrainian relief efforts or military defence is admittedly puny. Nevertheless, the Ukrainian government has already collected over $60-million from its donation appeal to people across the world. And that excludes money to organisations like Medecins Sans Frontieres.

But this is about more than money. It’s a material way of expressing solidarity and condemning an awful violation of international law and gross violations of human rights. Most importantly it says to the Ukrainian people that there are South Africans who genuinely care about what’s happened to them, and who do not stand with our government’s kowtowing to Russia and Putin.