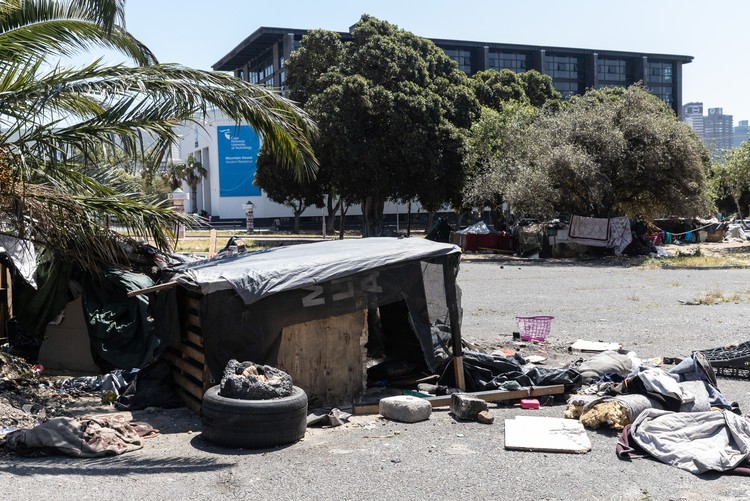 A group of about 100 homeless people living people on Sydney Street in District Six say they are regularly raided by law enforcement officers. The group recently won a case against the City of Cape Town which has been ordered to pay them R1,700 each in compensation for belongings damaged and lost during an eviction in September 2021.

“Nobody wants to live this life. I can’t be expected to live this life and wake up happy,” says Iddi Faraji Challah. He is one of about 100 people living in tents and makeshift homes in a parking lot in District Six, Cape Town.

He says their living conditions are difficult because they are badgered by law enforcement officers several times a week. According to the occupants, the officers manhandle them during raids, search their shelters, throw their belongings outside, and often break their shelters. Challah says officers have also accused the occupants of stealing and questioned them about where they get money to buy food.

He says that once officers demanded that they extinguish a fire and kicked over the food they were cooking. “It’s like they’re coming to attack [us],” he says.

In October 2021, the Western Cape High Court interdicted the City of Cape Town from “demolishing, damaging, confiscating or otherwise destroying” the homeless group’s shelters and belongings.

The court also found that the City had wrongfully evicted the group in September 2021 and ordered that they be compensated. GroundUp recently reported that some of the residents have received their R1,700 compensation. Housing rights organisation Ndifuna Ukwazi represented the group in the court case. 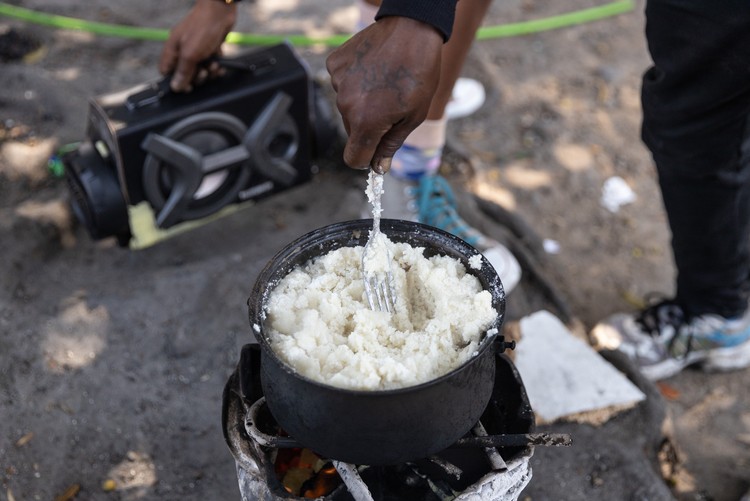 One of the homeless people living on Sydney Street cooking pap as their meal for the day.

When we visited the occupation on Sydney Street, some residents were cooking pap over a fire in a metal bin. Tents and shelters were scattered across the large parking lot. Many of the shelters are made of plastic sheets, wooden planks, cardboard, blankets and black bags. Some shelters are tied to the surrounding trees to hold it up.

According to Challah, some of the occupants had lost their jobs and weren’t able to pay rent, while others left home due to family problems. He says that when officers can’t find a zip or opening to a shelter, they will cut it open with a knife. “When they’re finished, that hokkie is upside down,” he says.

Poppie Meyer, who has lived at the occupation with her husband for a few years, recounted an incident where officers ripped open their tent while they were asleep inside. She says they have lost their IDs and other important documents during these raids. “You must try to grab and pick up stuff as they throw it outside … It’s not good living like this,” she says.

Meyer says that she has lived on the street for nearly nine years. “We didn’t think we’d be outside forever,” she says.

Danielle Louw, attorney at Ndifuna Ukwazi, said that law enforcement officials are usually searching for illegal substances and use this to justify their raids.

Louw said that since the court case, the occupants are being “targeted for the very fact of standing up for themselves and their rights”. 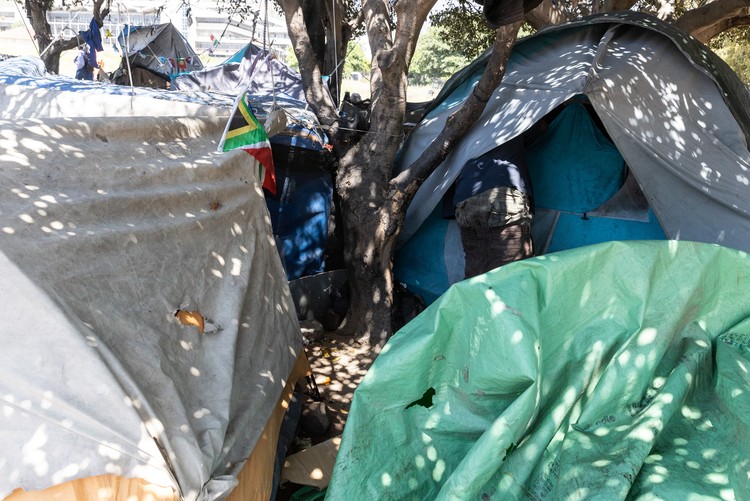 Many of the shelters are made of plastic sheets, wooden planks, cardboard, blankets and black bags.

She said that the majority of the people living in the occupation “have a unique set of circumstances which usually includes illegal substance use or mental and physical ailments”. She said “it’s not just about offering a house” but also the appropriate kind of support, such as access to a social worker, counselling, rehabilitation, or occupational therapy.

District Six Civic Association chairperson Asa Salie, who lives close to the occupation, said that she has empathy for the homeless group. Salie said that they have had a massive increase in rats and flies in the area. She said that she sometimes can’t stand on her stoep because of the rats running past.

Salie said that the City should urgently provide the group bins for their rubbish, mobile toilets, and proper refuse removal. “It’s not my job to tell people they don’t belong, because people need a place to live,” said Salie.

She said while residents of District Six did not want the group to remain in the area indefinitely, they believe the area should at least be “clean” and “as dignified as possible” for the people living at the occupation.

In response to several questions, the City of Cape Town said that it conducts “general crime prevention, by-law enforcement and area cleaning in the District Six area”.

“During the course of the District Six litigation, for which the City was granted leave to appeal, various allegations were made that were not provable on the papers and may serve narrow interests in perpetuating the unlawful occupation.

“The City notes a general pattern of Ndifuna Ukwazi’s clients, in this litigation and others, indefinitely refusing all offers of shelter and social assistance while reserving public spaces from being available for wider use,” the City said.

The City has withdrawn its appeal against the court ruling. 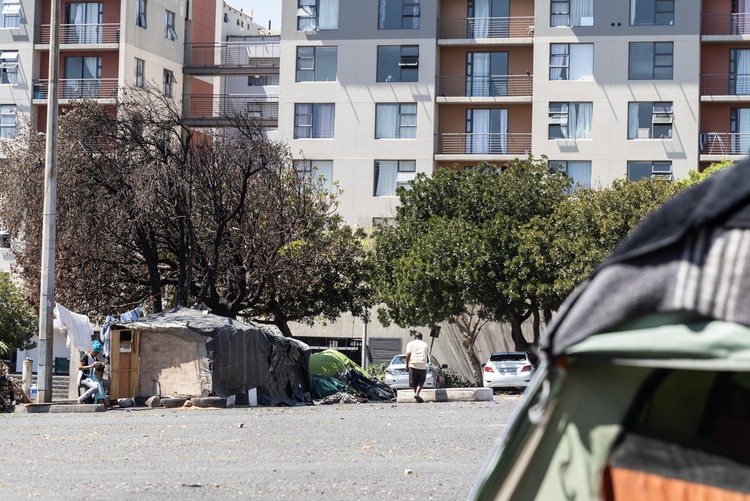 Previous:  In it to win it – Joe Slovo learners head to world robotics championship