“Every day there are electricity issues,” says Pietermaritzburg resident 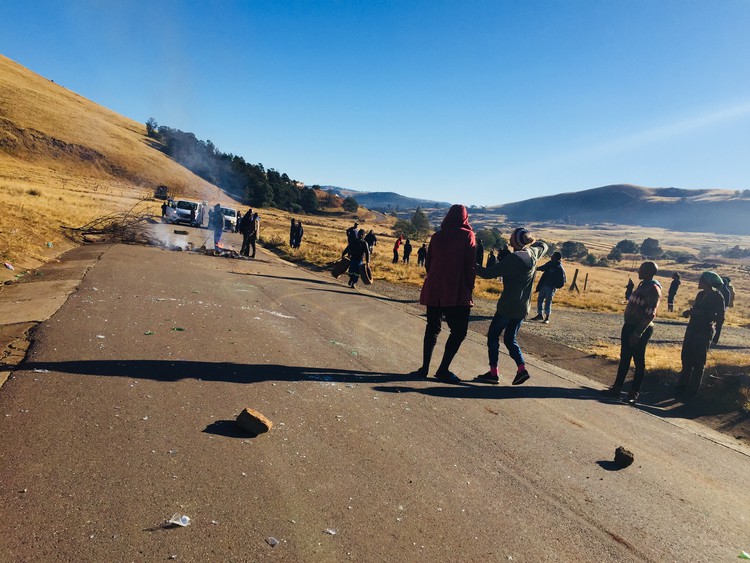 Residents of Ngubeni in Pietermaritzburg blocked roads in the area on Friday in protest over unexpected blackouts and water shortages. The power has since been restored. Photo: Nompendulo Ngubane

“We have been living a hard life. It’s winter and we depend on electricity to get warm,” said resident Muzi Dlamini.

He was among the protesters who shut down areas including Nadi, Nkangala, Noshezi, Snathing, Etafuleni and Entembeni for two days until late on Friday night. No arrests were made and the power was restored on Saturday.

Dlamini lives in Etafuleni, one of the areas hardest hit by unexpected power cuts. “Last year we experienced load shedding like other residents. In April [2020] we started having unusual electricity blackouts. Every day there are electricity issues. We are forced to have other alternatives like making a fire to cook and it’s difficult,” said Dlamini.

On Thursday, residents blocked all entrances to the affected areas with trees, stones and burning tyres, forcing the closure of Bhekuximba Secondary, Bhekamatshe Primary School and Sondela clinic. The areas remained cordoned off until Saturday.

Resident Hlengiwe Mdletshe said they were frustrated and believed their plea for permanent water tanks is being ignored. Taps in the area ran dry about two years ago, he said.

“We don’t care about Covid-19. All we want is water. They expect us to wash our hands but don’t provide us with water. We want Councillor Nathi Mbanjwa to address us. The matter was reported to him but he’s turning a blind eye,” said Mdletshe.

But when Mbanjwa arrived on Friday accompanied by police, residents refused to let him speak.

Mbanjwa said, “I intervened by calling Eskom. They explained that the electricity problem is caused by the high number of households using the electricity. We only have one transformer that supplies electricity to the whole community.”

Msunduzi Municipality Speaker Eunice Majola Zondi also attempted to quell protesters, to which a protester shouted, “All of these people are liars. She must commit by writing down all what she’s saying. They can’t be trusted. If that cannot be done, they must leave.”

Next:  Community Chest houses homeless group in its office for winter