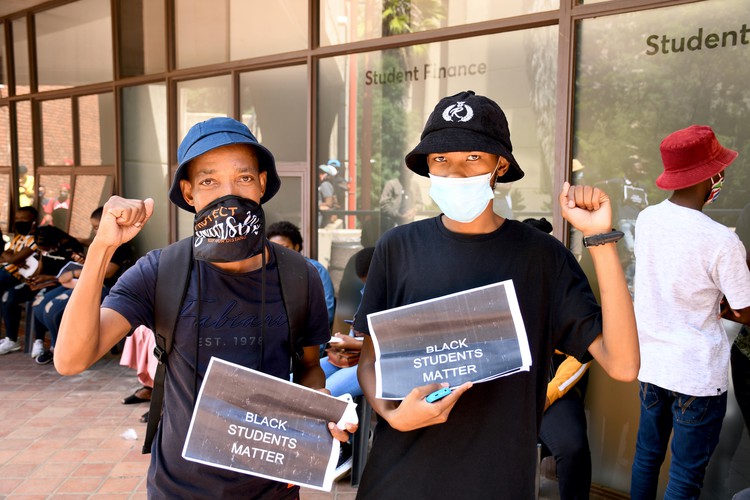 University of Johannesburg students Miracle Khosi (left) and Neo Kometsi (right) believe it’s unfair that classes started without students having financial access to books and food due to delays in NSFAS payments. They joined dozens of students to picket on Wednesday. Photo: Julia Evans

About 40 students gathered at the Mafikeng building at the University of Johannesburg (UJ) Auckland Park Campus on Wednesday before marching to the finance building. They want the university to allow students who are funded by NSFAS to be allowed to register. They also demanded allowances for food and academic material.

The group handed over a memorandum of their demands to Godfrey Helani, Senior Director of Student Affairs, who promised to respond later in the day.

Their demands include that all students who passed 50% of their modules be unblocked and allowed to register, for them to get book and meal allowances; and for some academic activities to be extended. They want their demands to be met by Friday.

Second year law student Miracle Khosi, 20, said, “It’s unfair for students to be busy with assignments without having any study material or allowances. It doesn’t really align with their right to equitable education.”

Computer Science and Informatics student, Letlhogonolo Mopedi, 26, said that the protest was necessary because they “can’t study with an empty stomach”.

Like most of the protesting students, Mopedi said he was able to register but many others could not afford to. “We are fighting for other students. Most of them are at home because they don’t even have the money to come to school.”

UJ management responded to the demands via Zoom call later on Wednesday. Management said that if senior students’ accounts were less than R10,000 in arrears, UJ would unblock the account. But on condition that the students sign an acknowledgment of debt (AOD).

Registration, which was meant to end on Wednesday, has also been extended to Friday to allow these students to register.

The management explained to students that various institutions agreed with NSFAS that the 2021 academic year would start in March, so NSFAS only planned to release funds this month.

Consequently, the universities that started in February like UJ did not receive the lump sum from NSFAS, which resulted in students not getting allowances over the past two weeks.

UJ said it had still not received the funds from NSFAS and has decided to use its own money to help students in March and April. The university said book allowances will be released from next week once students sign the AOD.