Some students in Bellville protested for travel allowances. Others in Parow narrowly avoided eviction from their residence

Northlink College students protest at the gates of the Bellville campus on Wednesday demanding they be paid their NSFAS travel allowances. Photo: Nombulelo Damba-Hendrik

Dozens of Northlink college students at the Bellville campus have given management two days to pay them their travel allowances of about R1,025.

On Wednesday, students protested outside the campus gates, demanding to be paid travel allowances which they claim the college has not paid them since December 2020.

On behalf of Northlink, Ronaldo Van Rooy said the college denied withholding the payments. He said student leaders were informed that payments could not be processed until the college got authorisation from the National Student Financial Aid Scheme (NSFAS).

He said the college will make payments as soon as NSFAS sends them the approved list of students.

“We have students who live as far as Worcester and they spend R600 a week travelling to college. Some students have not come to college because they do not have money,” she said.

SRC president Andile Manqindi led a small group of students to disrupt a few of the classes but they were not allowed into the lecture rooms. Speaking to protesting students after he briefly met with some college staff, Manqindi said he was told that the travel allowances will be paid on 25 March.

A student who identified herself as Athenkosi said she lived in Khayelitsha and her mother was “sinking in debt” after borrowing money for her to travel to college every day.

“In the township, if you do not have money you rely on loan sharks who are now charging 60% interest. From Khayelitsha, I spend R54 per day and R300 per week. If the college refuses to make the double payments now, my mother will continue to be in debt because she is unemployed. She will have to use mine and my two other sibling’s grants to pay the loan shark and borrow again,” she said.

Evicted and then allowed back

Meanwhile, in Parow, about 70 Northlink College students were evicted from their residence on Tuesday after failing to pay rent. The students say they have not been able to make payments because NSFAS has not paid their funds for March.

The students live in a private student residence called Bornfree in Parow. They say they were sent rent invoices of R2,500 a week ago. The landlord told them to vacate on Tuesday, 2 March if they couldn’t pay the amount. 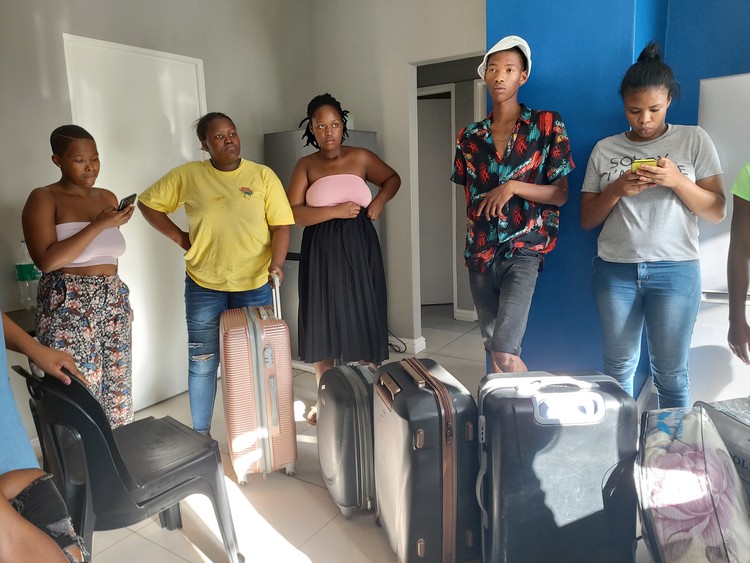 Some evicted Northlink College students gather in the room of Thembelihle Xhalanga and Phelela Mgolozeli on Tuesday afternoon before walking just under 4km to the Tygerberg campus with their packed bags. The students say they have been unable to pay rent because NSFAS has not yet paid their funds for the month. Photo: Liezl Human

On Tuesday morning, they packed their belongings in large bags and walked to the Tygerberg campus, where they met with the Housing Assembly, a social movement, and college management.

Lazola Burns, a resident at Bornfree, said many students were still waiting to hear if NSFAS approved their application for funding. He said that some of the Bornfree students live far from Cape Town and don’t have family they can go live with if they are evicted.

Burns said he was still stressed about paying rent, since the landlord still wants him to pay at least R1,000 this week. He said he is currently trying to contact people who could help him make the payment.

When student’s arrived at the campus, Stephen Maciko, general secretary of the Housing Assembly, said the college made an agreement with the landlord for the students to move back. This is on condition that they pay double the rental fee due next month.

The students walked back to Bornfree with their belongings.

Thembelihle Xhalanga, while speaking for her roommates, said most of their parents had already paid a R2,000 deposit when they moved in during the first week of February.

Xhalanga said that they all came from “difficult family backgrounds” which led them to apply for the funding. They rely on it to survive.

“Our cupboards are empty, we don’t even have something to eat,” she said.

GroundUp contacted Papama Mpupa, spokesperson at NSFAS, who promised to respond on Wednesday, but had not done so by the time of publication. A response will be included once received.

Next:  NSFAS delays: “We can’t study with an empty stomach” says student