After initial reluctance there is now great excitement, as rollout proceeds 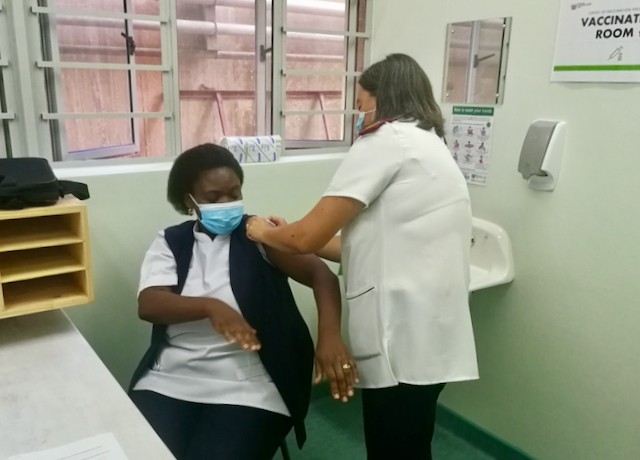 Demand for vaccination among Eastern Cape health workers exceeds the current supply to the province from the national government.

Eastern Cape acting head of health Dr Sibongile Zungu said the province has about 58,000 health professionals that are eligible for vaccination during the first phase of the rollout. She said the province needs at least 20,000 doses in addition to 5,400 already administered and the 3,000 doses received this week for people at high risk.

Eastern Cape health spokesperson Sizwe Kupelo said at least 200,000 people are expected to be vaccinated during phase one. These include health workers in both public and private facilities, traditional healers and people that are working in mortuaries.

Dr Zungu said there was reluctance by health workers to get vaccinated in the beginning when it launched the vaccination roll out on 17 February at Livingston Hospital in Port Elizabeth and Nelson Mandela Academic Hospital.

“There was some reluctance at the sites … The earlier numbers from day one and day two did not reach 100. But there was an excitement after some leadership went in front and took the vaccine. At this point we have a huge challenge, there’s a very high demand but doses are few,” said Zungu.

The province launched its third vaccination site at Frere Hospital in East London on Wednesday, where five rooms have been set up to administer vaccines.

The first to receive the jab at Frere was its Clinical Manager Dr Radu Ispas.

“We are more confident [now] that we’re being vaccinated. The vaccine will protect us and will put us at ease in our work,” said Ispas.

Also among the first to be vaccinated was Lindiwe Ngomi who works in a Covid-19 ward.

“We do need it as healthcare workers because this disease is killing us, so we need to protect ourselves and also wear PPE at all times,” said Ngomi.

Zungu attributed the high demand for vaccination among healthcare workers to high numbers of infections and deaths, especially in the big hospitals. The province has lost about 304 health workers due to Covid-19 related complications.

“The big hospitals suffered a lot during the first and the second wave of Covid-19. The number of staff that were infected was a lot, especially those that are in the frontline, emergency services and in the Covid wards,” said Zungu.

“With the staff having seen all of this and also seeing others being vaccinated in Mthatha and Port Elizabeth, as well as their colleagues in other provinces like Gauteng, there was quite a lot of excitement.”

Zungu said the province has been promised about 117,000 doses of the two-dose Pfizer vaccine by the national government.

The province has also extended vaccination sites to two Netcare Private Hospitals in both East London and Port Elizabeth.

Next:  Temporary housing material worth R4m left unused since 2018