About 50 musicians and performers picket outside Parliament demanding relief money 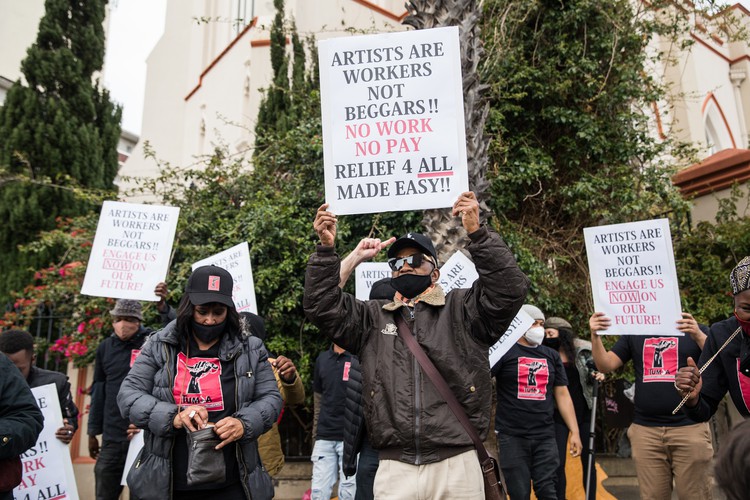 Pianist and composer Themba Fassie (holding up a placard) and singer Vicky Sampson join a protest opposite Parliament on Wednesday to demand relief funding for musicians and artists. Photo: Ashraf Hendricks

“Artists are workers, not beggars!” and “Relief 4 all made easy” - these slogans were plastered across placards being held up by about 50 musicians and performers near Parliament in Cape Town on Wednesday.

Themba Fassie, who bears a striking resemblance to his famous sister the late Brenda Fassie, said: “The last time I had a gig was in November last year.”

Fassie said that before the lockdown his income was about R20,000 per month but now he relies on the little he gets from his pension fund. “After the festive season around December, everything becomes quiet. It usually picks up again in March but this year the pandemic started and really affected us because we have no other income at all,” he said.

Fassie questioned the government’s justification of its restriction which limits certain events to a maximum of 50 people. “How are you going to get paid when you have a six-member band?” He said he joined this protest because he wanted government to allow more space at entertainment venues. He emphasised that artists knew the rules about physical distancing and sanitising. Fassie said he was hoping the situation would improve if restrictions were relaxed to level 1 soon.

In August, Nathi Mthethwa, the Minister of Arts and Culture, announced a second wave of Covid-19 relief funding. “The department will be rolling-out two processes to implement sector relief. The first process will include relief for athletes and all technical personnel in the sport sector, while the second process will focus on arts and culture sector relief,” he said. Mthethwa said the relief for the arts and culture sector would be a once-off payment of R6,600.

Vicky Sampson, national chairperson for the Trade Union for Musicians of South Africa (TUMSA), said the application process for the relief payment was cumbersome. “Musicians should only need to prove that they are artists to receive the funding. Radical change is needed in the creative industry as a whole.”

She said that 90% of the musicians who applied for the first round of relief funding are yet to be paid. This was reiterated in a report by New Frame, which stated that only a small percentage of artists and creatives had received emergency funding.

“For seven months, we’ve been sitting out in the cold, waiting and relying on the department to give us a little handout,” said Sampson.

She said apart from immediate Covid-19 relief, artists wanted new regulations and legislation to protect them and the use of more local content on television and radio. She said that venues needed to go back to 70% capacity because “50 people is ridiculous”.

Sampson said that artists needed to have access to the funding “because we are starving”.