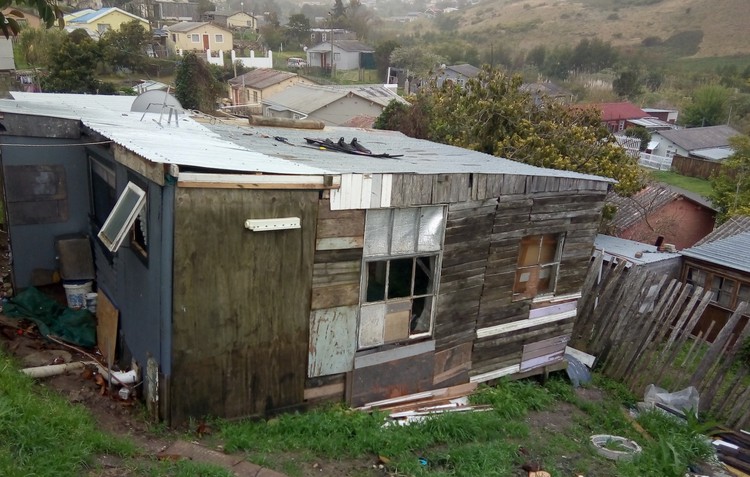 Juanne Kleinbooi’s backyard shack is at the bottom of a hill. Photo: Siphokazi Mnyobe

The future is bleak for the 9,000 backyarders spread across Knysna, fewer than 700 of whom are on the waiting list for housing.

A backyarder is someone who rents a shack or low-cost dwelling (like a caravan) in the yard of another person’s house.

Thirty-six-year-old Juanne Kleinbooi has spent most of her life as a backyarder. She lives in Hornlee West in a two-roomed shack with her husband and three children. Kleinbooi works two days a week at a garage and her husband does occasional work. Like many backyard dwellings in Knysna, the Kleinbooi shack is at the bottom of a hill, where rain water accumulates. The water comes in under the door and the roof leaks. The kitchen is in a tiny room like a corridor, with a two-plate electric stove. Beyond the kitchen is a toilet. The family shares an electric box with neighbours.

“For dwellers at the bottom, living in a mud bowl like pigs is normal,” says Kleinbooi. “There is no space in my shack for chairs. We eat sitting on beds and my children do not have a room to study. I grew up as a backyard dweller and now I am raising my children as one. I feel like this is a generational curse,” said Kleinbooi.

According to Knysna municipality communications officer Nwabisa Pondoyi, there are 9,000 backyarders in the town, of whom 668 are on the waiting list for houses.

“I have lost all hope of getting a house,” said 62-year-old year old Clara Thysee who has been a backyard dweller since she moved to her mother’s yard in 1975 with her three children. She lives in an old caravan without a toilet or running water. She cooks on a paraffin stove and uses the toilet in the main house.

Mayor Elrick Van Aswegen told GroundUp a project was under way in Hornlee and 33 houses would be set aside for backyarders. He said backyarders should communicate with their ward councillors about housing possibilities.

Next:  We are living in liquid shit, say eThembeni families

Everyone has a human right to shelter, but shelter that is equal to a "pigsty" is not what is meant. These people deserve better. The municipality should step up to the plate. How long must they be on a housing list before something is done?

Now is the time to give these human beings an opportunity to shine. To show their children that what Mandela was striving for in our country is going to come true. Let's work together.