“We are forgotten. We will be remembered when the elections are closer”

Residents of Khethi in Pietermaritzburg struggle to access schools, clinics and water 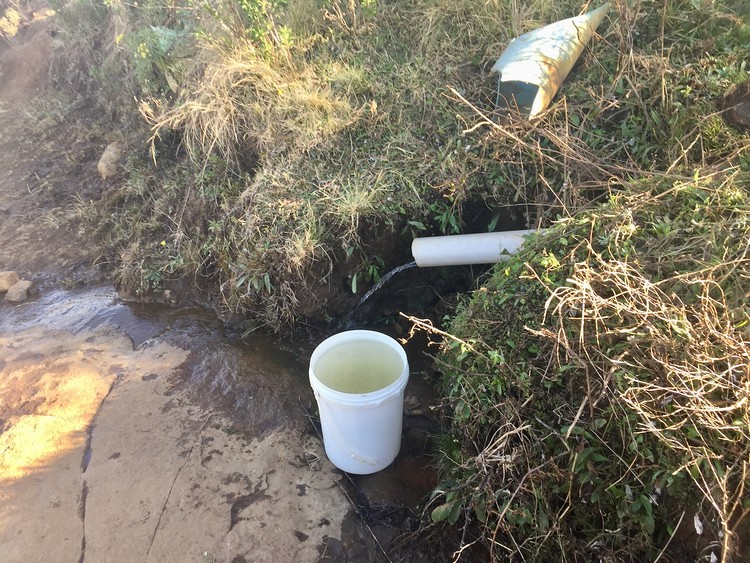 Residents of Khethi in Pietermaritzburg share this water source with cows and goats. Photo: Nompendulo Ngubane

“We don’t exist,” says Siyanda Mbatha, a resident from Khethi location in Pietermaritzburg. Her community hasn’t seen the fruits of “so called democracy”, she says.

“We are forgotten and we will be remembered when the elections are closer next year,” says Mbatha.

Located 27km from the city in ward 8 of the Msunduzi municipality, Khethi has over 500 households. It was electrified in 1995 and there was a low-cost housing project which benefited some residents in 2014. Otherwise, residents say, there has been precious little progress.

The main access road is potholed. “Using public transport is a nightmare in this area. When it rains the one bus and taxis don’t come here. Residents are forced to walk about five kilometres to get to a road that is tarred to find taxis,” said Mbatha.

Learners whose parents cannot afford scholar transport have to walk in all seasons for an hour each way to reach the two schools in the area – Sikhululiwe High and Khobongwane Primary.

Residents said taps ran dry over ten years ago. They now get water from a stream in the forest.

“Cows and goats drink from there. Sometimes we have to wait for hours for the water to be clean after the cows have been drinking … It is far. No person deserves what we are going through in our daily life. Water is a need. We can’t live without it,” says Lungi Ndlovu.

The nearest clinic is a two-hour walk. “It’s a four hour trip going to the clinic. It’s two hours going there and another two hours coming back. Taxis don’t use this road [D22] because of its bad condition. Once you miss the bus, you have no choice but to walk. How unfair is that?” said Ndlovu.

Ward Councillor Makhosazane Zondo (ANC) said Khethi is not neglected. She said her last meeting with the community was early last year. She said in June, two Jojo tanks were delivered.

“I’m aware that there is a problem with water. It’s not true that it has been over ten years. The road they are talking about is bad I know. The Department of Transport doesn’t have a budget allocation to fix the road in question. Once they have the budget they will then allocate money to attend that road,” she said.

“Once there is a budget the issue of the road will be discussed,” said Msunduzi municipality spokesperson Thobeka Mafumbatha.

Next:  How we count our dead during Covid-19