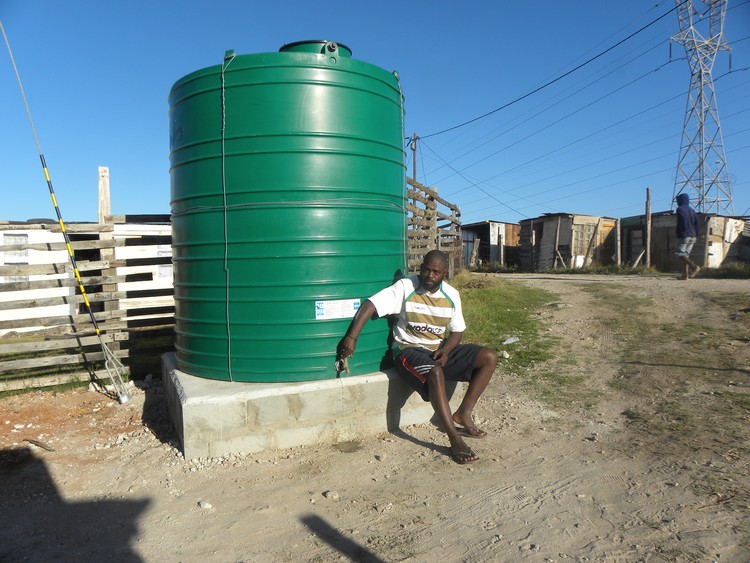 Luyanda Kondlo, a community leader in Ramaphosa informal settlement, Motherwell, shows the last few drops of water in one of the tanks provided by the municipality as part of its Covid-19 mitigation measures. Photo: Joseph Chirume

“We are failing to comply with the regulations on social distancing because residents spend time in long queues waiting to fetch water,” says Luyanda Kondlo, a community leader in Ramaphosa informal settlement in Motherwell, Port Elizabeth.

He says the water tanks, delivered to the area as part of the Nelson Mandela Bay Municipality’s response to the pandemic, are not replenished often and when they are, it is not filled to the brim.

“Our people are struggling to wash their hands regularly because of the little water available to them,” he says.

“Water tanks in Nomakanjani are operating. The municipality should do the same for all informal settlements,” says Kondlo.

The municipality has said that 89 water tanks it has delivered to various areas are expected to reduce long queues at existing communal taps.

When GroundUp visited Powerline informal settlement, three of the tanks were empty. Resident Babalwa Mthi says she walks more than 100 metres, passing one of the empty Jojo tanks, to fetch water from a communal tap.

“We were all glad when the Jojo tanks were installed. We thought our daily struggle for water was over, but these tanks have never been filled with water and we now fear that they will end up being vandalised,” she says.

“A lot of money was spent buying these tanks, only for them to be left lying idle. We spend hours queueing for water. This will make the government’s effort to [slow] the spread of coronavirus futile,” she says.

Acting Mayor Thsonono Buyeye has said, “While people are still staying in shacks, we need to move swiftly with services so that we do not have people queueing in their hundreds in front of a single water tap. In these conditions we may as well as forget about social distancing and washing of hands.”

Messages and calls to Mayco member for Infrastructure and Engineering, Andile Lungisa were not responded to by the time of publication.

Next:  Covid-19: Sanitation is a struggle in Kleinbegin in the winelands

Previous:  SASSA’s big test: When will the emergency Covid-19 social grant be paid?