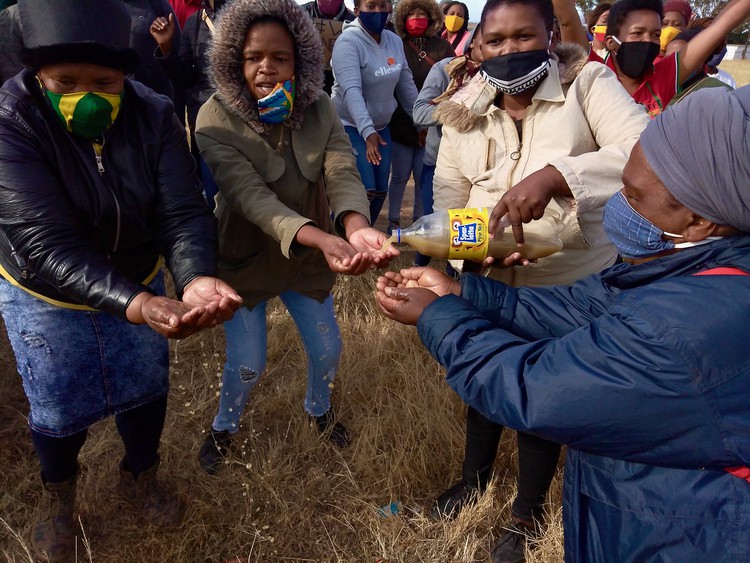 About 100 protesters tried to close down the N2 in the early hours of Tuesday near Ngqushwa (Peddie) outside King Williams Town. Police dispersed the protesters by firing rubber bullets.

Two protesters were arrested at the scene. The crowd demanded their release and they were set free with the approval of the mayor.

Ngqushwa village has about 50 recorded cases of Covid-19, and residents say it is impossible to practise washing hands to curb the spread of the virus as they have insufficient access to water.

Supermarkets, schools, shops and Nompumelelo hospital have opened and closed at various times due to fears of Covid-19. On 2 July, the police station was closed.

Fixing iNgqushwa Yethu founder and chairperson Athini Ngxumza said water had been an issue for years. Taps ran dry in some villages four years ago, in others ten years ago, she said.

“We were so surprised when we heard our own municipality campaigning the wash-your-hands … knowing very well they did not give us water,” she said.

She said they had been writing to the municipality and the premier’s office for years. Most recently on 16 June, they had emailed the new mayor, Sanga Siyabulela Maneli. They asked for a response in seven days but never heard back, she said.

Last Friday, Maneli made a speech on local radio about the water crisis, saying a list of areas struggling with water had been sent to Amathole District Municipality urging swift intervention for the safety of the people.

“In Ngqushwa we have dams that were used to provide water for our villages even before 1994, but because we don’t have machines to clean and service the dams, they have gone dry and during heavy rains produce dirty water,’’ said Ngxumza.

‘’There are trucks that get tenders from the municipality to deliver water in our villages but when they get to these dry villages, they sell them to the highest bidders; a 2,000-litre tank costs R500, 60-litre drums R200, and R30 for 20-litre bucket,’’ a resident told GroundUp.

Noziphiwo Mantanga of Mphekweni village said their taps ran dry in 2016. ‘’We share water with a different village, Chakwe, about three kilometres from our village. Still the water is not clean enough for consumption, and cattle also use the same water. We are tired of struggling for water,’’ she said.

Amathole District Municipality Senior Manager Mlamli Bhongco confirmed receipt of the list of villages without water. “As the municipality we have a challenge of water but since we have to deliver something for our people, we have distributed two trucks of water for these villages.”

“Another challenge in this water shortage was that we need to provide water to the schools that just opened, ensuring safety of learners and smooth operations in those schools,’’ he said.

Bhongco said that he had been told about water being sold from trucks to residents, but the trucks did not belong to the municipality. He promised four more water trucks would come on stream.

Next:  Truck drivers protest against employment of immigrants

Previous:  Glenn Sandler was 36 years old and healthy. Covid-19 plunged him into a coma for three weeks