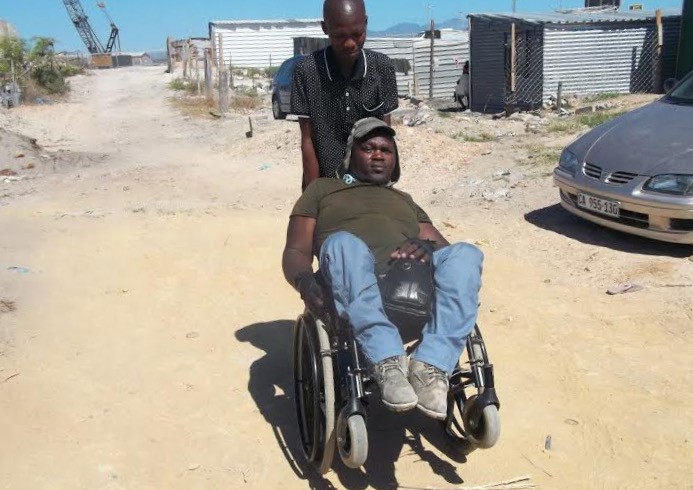 Zwelenkosi Ngidi with Mzimasi Msayithelwa, who helps him get around in his damaged wheelchair. Photo: Vincent Lali

Zwelenkosi Ngidi is hoping the City of Cape Town will replace the wheelchair which was broken when Metro police threw him off his wheelchair at Cape Town police station in November last year.

Ngidi had approached the police to ask about the detention of community leaders during protests in Khayelitsha. “I wanted to ask why the leaders were arrested, what charges they were facing and where they would appear, but the police threw me off my wheelchair.”

At the time, the City of Cape Town condemned the incident and said the two metro police officers involved had been suspended.

Ngidi served as a spokesperson for Intlungu Yabahlali Basematyotyombeni, which was protesting for the provision of basic services in areas established during the hard lockdown.

He spent R400 to get his wheelchair welded, but it kept breaking down, he said. “I used to be able to wheel myself to my destinations. Now I have to ask someone to move me around because the wheels come off,” he said. He said he kept buying new screws to attach the wheels to the chair but the screws broke. The foot ramps on the wheelchair were also broken and he has to rest his feet on a string.

Ngidi said he had to pay taxi fare for the person who accompanies and wheels him to his destinations outside Ethembeni, where he settled after struggling to pay rent in nearby Makhaza. His disability grant goes to food, airtime, taxi fare and doctors’ fees.

He uses the wheelchair to attend community meetings and to go to clinics, academic institutions and Makhaza Mall, he said. He also uses it to go to Makhaza to take a bath and to relieve himself because he can’t use the mobile toilets in Ethembeni. “I go to an RDP house and use an inside toilet in Makhaza,” he said.

His lawyer sent a claim to the City of Cape Town shortly after the incident in November last year, he said, but he had not yet received a response.

Richard Bosman, Executive Director for Safety and Security, City of Cape Town, said: “The City has received a claim and we are engaging with the claimant’s attorneys. The staff members concerned have been suspended and an investigation is under way. Disciplinary action will be taken in terms of the relevant policies,” he said.

“All due process must be followed.”

Previous:  Executive who saved PRASA billions has been fired