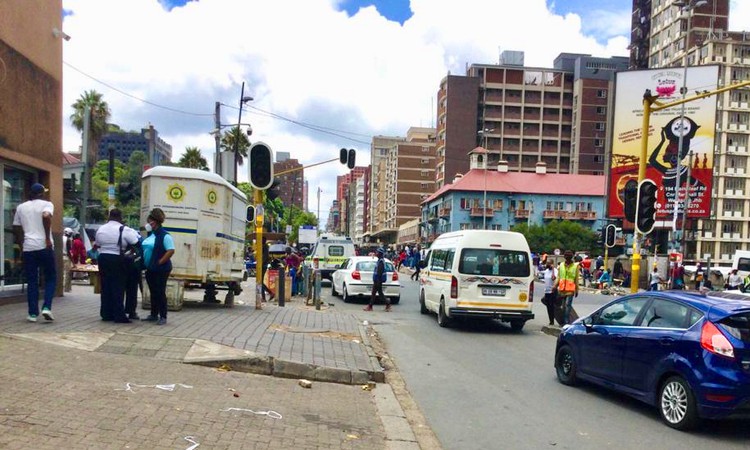 Bree Street in central Johannesburg is said to be a hot spot for police soliciting bribes from immigrant women. Photo: Kimberly Mutandiro

Police in central Johannesburg who routinely demand to see the passports or ID documents of immigrant women, have been accused of extorting bribes and threatening the women with deportation if they fail to produce documentation. According to a number of women who spoke to GroundUp, sometimes the officers are in plain clothes or wearing reflector vests when they extort bribes.

The women are mostly immigrants from Malawi, Mozambique and Zimbabwe. Some are asylum seekers whose documents are lost or expired.

They say their traditional clothes and their accents give them away.

Memory, born in Zimbabwe, said she is terrified when she goes twice a week from Springs Kwathema township to the city centre to buy stock for her cleaning product and hair extension business. But as she supports four children she has no option.

“What will happen to my children if l get arrested or deported while they are at home?” she said.

She has been in South Africa for eight years and her passport expired. She said she has had to pay bribes three times to police for not having a valid passport.

Last week on Friday police officers took her last R100. “When I told them that I did not have it [passport] they said I should buy them a ‘cold drink’ if l did not want to be arrested,” she said.

“I can speak Zulu but for some reason they can tell that l am an immigrant. I always wonder what it is that makes me look different from any other person,” she said.

Matilda, originally from Lilongwe, Malawi, said, “Two weeks ago I met them [police] while going to buy groceries. After showing me a police card [badge] they told me to ‘make a plan’ so they do not take me away as l had no passport. I gave them R200 and returned home.”

She lives with her husband and two children in a flat in Johannesburg.

Grace and Annie from Zimbabwe, who sell clothes, allege that they too have been extorted.

“They used to come to a Namibian restaurant where l worked. They would take money from Namibian customers who failed to produce passports,” said Grace.

“How does one challenge policemen who show proof that they are police? It’s best to give them the money,” said Annie.

She claims the police took R600 off her at the end of January.

Keri from Malawi, who sells cold drinks at a taxi rank, said, “Women are the ones who are mostly victimised.”

Lawyers for Human Rights (LHR) has condemned the arrest, detention and solicitation of bribes from immigrant women by law enforcement agents.

Sharon Ekambaram, Head of the Refugee and Migrant Rights Program at LHR, said, “There is little consideration for the plight of migrant women especially at the hands of law enforcement agents. This includes police and at times immigration officers who solicit bribes and exploit the vulnerability of women. Many police and law enforcement agents are perpetrators of violence against migrant women in the name of enforcing the law. This takes place with impunity.”

Police spokesperson Kay Makhubele said that immigration officers participate in most operations. “Yes, police can arrest any persons who are in the country illegally. … Those who complain about corruption, they must report it to the police station.”