Vendor’s relief as permit payments suspended for another six months

Customers were lost during the Covid pandemic, says Claremont fruit and vegetable trader 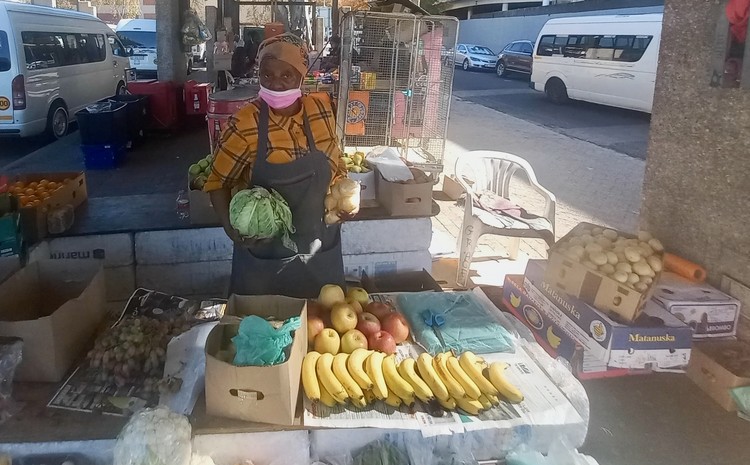 Grace April has been selling fruit and vegetables in Claremont for 20 years. Photo: Siphokazi Mnyobe

Grace April, who has been selling fruit and vegetables at Claremont taxi rank in Cape Town for more than 20 years, battled to keep going through the Covid pandemic and lockdown. The decision by the City of Cape Town to suspend traders’ permit payments for another six months comes as a great relief, she says.

Payments for permits were suspended at the beginning of the year for six months to bring some relief to informal traders battling with the effects of Covid and the lockdown. The suspension has now been extended for another six months, until the end of December. This will benefit nearly 5,000 informal traders in Cape Town, says James Vos, Mayoral Committee member for economic growth. The decision brings Cape Town in line with the national regulations.

She said she is using the money she saves from the permit to expand her range of vegetables and herbs. “I managed to add ginger, lemon, tamarillo, and garlic to the stock I sell through the money I saved from not paying the permit. I’m planning to add more herbs,” said April.

The 65-year-old said she lost customers whose income was affected by the pandemic. “Losing loyal customers because of the pandemic was my first challenge. The second is trying to keep the ones I have left happy by keeping the prices low even when I’m losing on profit,” said April.

Potatoes, onions, cabbage, carrots and tomatoes are her most popular goods. She sells a small plastic bag of potatoes, tomatoes and onions for R12, a cabbage for R25 and one kilo of carrot for R16.

She sold fruit and vegetables for someone else for five years before deciding to start her own business. She has now employed her 18-year-old grandson to assist on busy days and pays him R500 a week.

April wakes up every morning between 3:30 and 4am, and leaves at 5am to buy stock at Epping Market. She spends R200 a day to hire a car to take her to the market and spends up to R600 to stock up on fruit and vegetables to sell.

April gives her unsold fruit and vegetables to neighbours and homeless people who sometimes assist her with packing and packaging, and sells some to informal farmers who own animals for R10 or R5 a box.

She raised her four children with the money she earned selling fruit and vegetables. She said she’s grateful to see them grown and healthy, but regrets not having been able to spend time with them when they were younger because she had to be out selling in the streets.

Next:  City of Cape Town is not tackling housing crisis with urgency, say activists