How bending the rules is getting people vaccinated

A library comes to the rescue 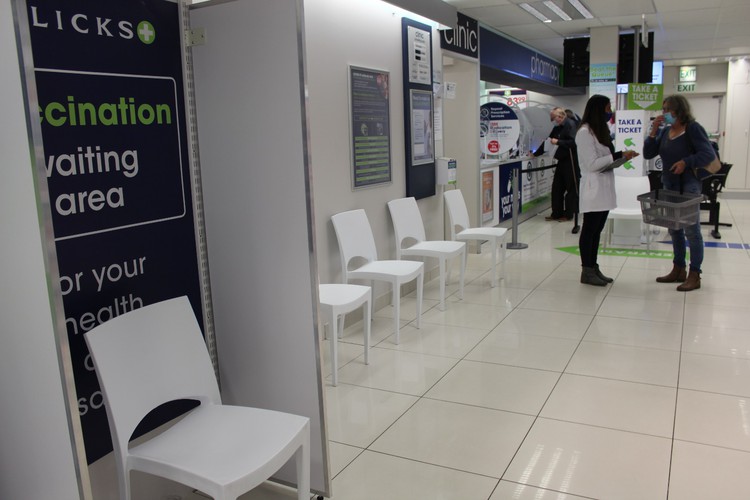 A line of chairs is unused at this store offering vaccines. But elderly people who walked in without appointments were turned away. Photo: Nicoli Nattrass

On Tuesday I walked into my local suburban Clicks store, where vaccinations were being offered for people over 60. A pharmacist was explaining to a group of elderly – and apparently not well off – ‘walk-ins’ that she could not vaccinate them because they were not registered to be vaccinated at that specific site.

“But I don’t know where to go,” said one woman, who looked to be in her 90s. “The SMS says I must go to Brown’s Farm but I have never heard of it.”

Another woman chimed in: “I am supposed to go to Nyanga, but Clicks is much closer and safer for me.”

“You could Google those clinics,” suggested the pharmacist, “and use your GPS to get there.”

“Use my what?” said one of the elderly women, looking like she was about to burst into tears. “I just want to get vaccinated – and the lady on the vaccine hotline said I could go to the nearest place.”

“The hotline is giving out bad information,” said the pharmacist.

“Let’s go home,” said the woman’s husband, “and think about it.”

It seemed so unnecessary to turn these people away, and to send very frail people, who should probably not be driving and might not even have cars, into unfamiliar places about 30 kilometres away.

As they shuffled away disconsolately, I asked the pharmacist why she could not just vaccinate them. She told me she only had enough vaccines for the people allocated to her site. I asked her how many she had, and she said “42”.

To plan on vaccinating only 42 people seemed absurd. As I left the store, I took a photo of the long line of empty chairs and the pharmacist explaining to yet another “walk-in” that vaccination was impossible. What a waste of everyone’s time – and an unnecessary obstacle to our much-needed roll out.

Intrigued, I decided to see what was happening in other roll out sites. I used Google and found a report listing operational sites. One of these was Pelican Park Clinic, near Zeekoevlei. I googled the clinic and instructed my GPS to take me there – just as the elderly woman at Clicks had been instructed to find her way to another clinic.

It took me to a residential street. I drove around the block. No clinic in sight. A passerby told me: “Oh, the pin for the clinic is wrong” and she gave me a set of new directions.

Ten minutes later I was at the clinic only to discover that this was not actually offering vaccinations. The report I read was more “bad information”.

Fortunately, a helpful nurse told me of another community clinic that was vaccinating people.

The pin was incorrect for that clinic too, but in this case it could be found by going around the block.

There was no queue so the “queue marshal” was happy to talk to me. She said that the clinic prioritised people who had been told by “the system” to come to the clinic. But, she said, after noon, they take people who had been “helped by the library” to register. She said that many elderly people were confused and did not know how to register or where to go and so the clinic looked after them in the afternoon.

I went inside, but the site manager said I had to get permission to ask about the roll out, so I left.

My next stop was the library to learn how elderly people were assisted with registration. “Many do not have cellphones,” I was told, “and they are more comfortable writing their information down than working online.” The library had devised an informal “form” they could fill in, which was then used by the librarians to register the person. When this was completed, the elderly went back to the clinic with their “form”.

“Surely they had to wait for an SMS?” I asked. The librarian said she thought that people just took their written details with them, and the clinic then “updated” the system later.

What a good idea! Three cheers for this clinic and library for being proactive and caring. I am withholding the name of the place in case it gets them into trouble for being such heroes.

So this is what I learnt from my brief foray:

Nattrass is a professor at UCT.

Next:  Elections 2021: Despite scandals and huge wastage, the ANC council looks secure in Hantam

Thank you for writing this letter. Clinic allocation has created a lamentable situation. It leaves the most vulnerable people unvaccinated, the elderly without a vehicle.

I'm just 61, I was sent to a clinic 5 km away, I needed a car to get there. I had never been to this location and I got lost. I don't have GPS, and the street map and reality were divergent. I was eventually helped by some engineers working on the dam in Delft. I am indebted and grateful to these good Samaritans. Meanwhile there is vaccinating at a clinic round the block from me, where I've been countless times, and the people who come there for vaccination are from great distances, such as from Delft. I do not know how they managed jumble everything up so when allocating people to particular clinics. They would have done better to allocate dates to everyone at the closest clinic, and I'm not sure why that sensible and practical step was impossible.

I heard of some help for old age homes. If there is a nurse capable of giving injections at an old age home, they can order in the vaccines to be delivered and administered at the old age home by that nurse.