Members of the Milnerton Aquatic Club, based at Rietvlei, are worried that the City of Cape Town has not started to rehabilitate the water. This comes after the club conducted its own water quality tests and found that the level of E. coli in the water was much too high for safe direct recreational contact. Rietvlei has been closed since late June.

Katja Haslinger, the conservation officer at the club, said that when they started doing their own water quality tests, the results were “shocking”.

Results are measured in colony-forming units (cfu) of E. coli (a bacteria found in human faeces) per 100ml. The City considers measurements of more than 4,001 cfu/100ml to pose an “unacceptable risk” to public health.

Haslinger said that they are worried sewage spills upstream at Rietvlei are still ongoing.

Earlier this month, GroundUp published the water quality tests provided by the City of Cape Town for three vleis that have been closed for months due to E. coli pollution. Test results taken in Rietvlei on 24 August were all above 23,000 cfu/100ml, with the highest sampling point measuring at 53,000 cfu/100ml (at a buoy near the Bayside canal outlet).

But that data is now one month old, said Haslinger, and it is unclear whether things are better or worse. “Due to the fact that the sewage spills further upstream are still ongoing, we doubt that the Rietvlei waterbody will improve soon,” she said.

Brian Webb, the club’s Commodore, said that they have found at least three sources of sewage flowing into the vlei.

“We’re not seeing any action,” he said.

Webb said the club has also struggled to get a response from the City on developments for sorting out the pollution in Rietvlei.

The Green Scorpions confirmed to GroundUp that it is currently looking into several matters of pollution of the environment as a result of sewage spills in Rietvlei, as well as Zandvlei and Zeekoevlei.

He said the City is implementing rehabilitation measures to address the pollution.

Van Jaarsveldt said the City’s sewage system is under strain from vandalism and ageing infrastructure, and the growth of both formal and informal settlements.

“The City has doubled in population over the past 20 years,” he said.

The City failed to respond to our questions sent on Monday. 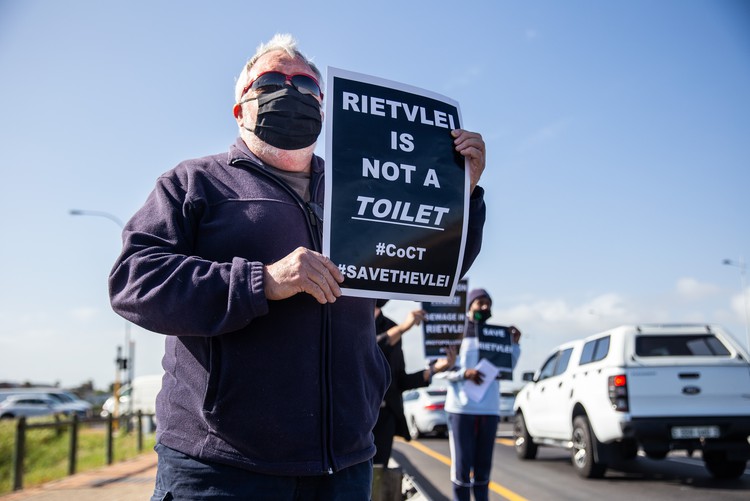 Brian Webb, Commodore at the Milnerton Aquatic Club, said they will be demonstrating every month to raise awareness to the pollution in Rietvlei. Photo: Ashraf Hendricks

Next:  Homeless people’s tents confiscated as City of Cape Town cracks down

Previous:  No water at Elim Hospital