Residents to meet with the municipality over their grievances on Tuesday 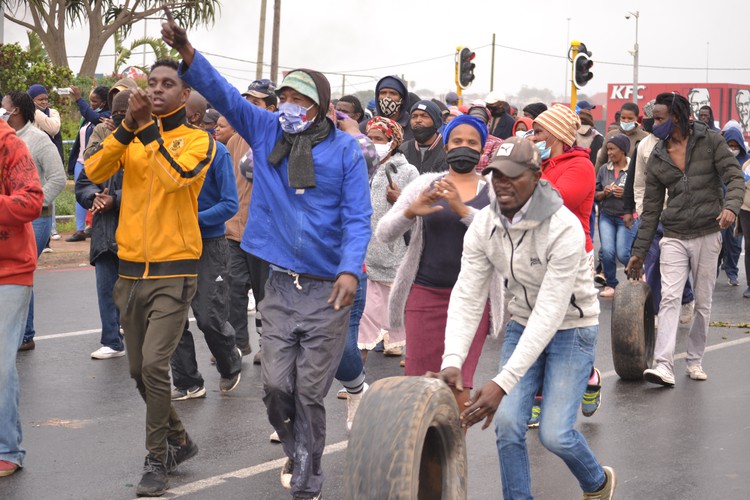 Many roads around KwaNobuhle and Khayelitsha in Uitenhage were blocked with large rocks on Monday as about 200 shack dwellers from the informal settlement on Kiva, Gqabi and Sonto streets under ward 43 protested, demanding toilets and the electrification of their shacks.

Learners writing exams were seen walking in the rain to school because the jikeleza taxi drivers could not drive past. The informal settlement has 890 shacks which are situated opposite brick houses.

Shacks went up in February 2019 and six months later, residents protested, demanding mobile toilets. Seven toilets were eventually provided for the 500 residents. They took to the streets again in February 2020 to demand electricity and more toilets.

On Monday, protesters complained that a huge chunk of the municipality’s budget went to Bobani Village in ward 45, Gunguluza, where a project to build 846 toilets started over a month ago.

Police spokesperson Captain Gerda Swart said no arrests were made.

Protest leader Siyakhumbula Pikini said: “The budget was passed in council this year for all informal settlements to get services. Four shacks in the informal settlement burnt down last week and a child died in the fire. We are living in darkness and it’s very dangerous at night.”

Lukhanyo Banana said: “We tried to meet with senior human settlements officials but one senior official in the directorate said that she will never go to our settlement. She told us she only deals with ward councillors.”

Ward 43 Councillor Simphiwe Ntshiza (EFF) said they would meet the municipal officials on Tuesday to discuss the protesters’ grievances.

Next:  300 people have been living in shipping containers for 10 years