Six arrested during clashes between SASCO marchers and police in Pretoria 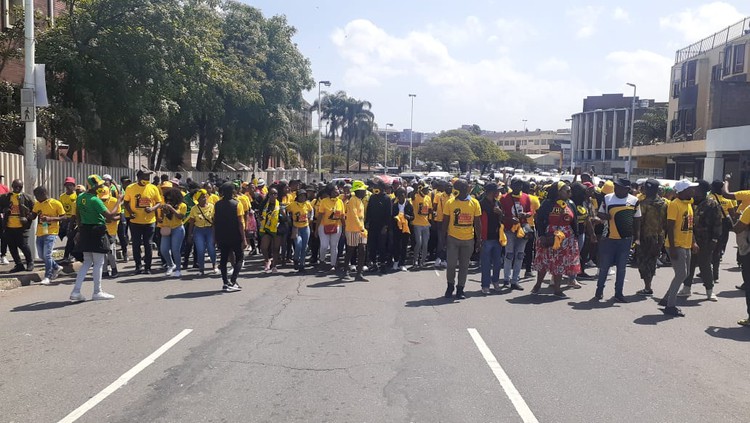 At least six people including a 17-year-old were arrested during clashes with police at a march organised by the South African Students Congress (SASCO) in Pretoria on Wednesday. They face charges of public violence and malicious damage to state property.

The group are expected to return to the Union Buildings on Thursday to hand over their memorandum to government officials.

On Wednesday, hundreds of students and supporters marched from Burgers Park in Pretoria to the city centre, before heading to the Union Buildings, where they had expected to hand over a memorandum giving the President 14 days to respond to their demands

The march was part of SASCO’s national day of action, with similar events planned for each province. Their aim was to highlight poor infrastructure, issues with student funding, outdated curriculums, and problems with student accommodation at the country’s Technical and Vocational Education and Training (TVET) colleges.

When marchers arrived at the Union Buildings, Matiwane informed students that a delegation had been sent to the office of the President. By 3pm, no one had come out to accept the memorandum. Students then tried to force their way onto the premises, hurling insults at police, and throwing stones and bottles. Police fired stun grenades and rubber bullets to disperse the crowd.

Sunnyside police spokesperson Captain Daniel Mavimbela said the suspects are expected to appear in the magistrate court soon. Provincial convener of SASCO in Gauteng, Phathutshedzo Nthulane, said they planned to shut down TVET colleges until their voices were heard.

Meanwhile in Durban, a large group of students marched from King Dinizulu Park in Berea to the City Hall.

Thabo Tsheme, SASCO KwaZulu-Natal provincial convenor, said restoring deteriorating infrastructure should be top of the agenda. He said some students were still waiting for laptops to be delivered because of delays at the Department of Education.

“We want the government to increase funding of the TVET sector. During level 4 and 3 of the national lockdown, we visited TVET institutions and were disappointed to find that they don’t even have personal protective equipment and sanitisers due to funding,” said Tsheme.

He said that the National Students Financial Aid Scheme (NSFAS) should also be consistent across all institutions. “TVET students don’t even know how much allowance they will get because sometimes it’s R250 and other times R450. The allowance should be the same for all,” he said.

The National Education, Health and Allied Workers’ Union (NEHAWU) also came out to support students. “We believe an urgent transformation of the TVET sector is needed if these colleges are to play a serious role in providing education and skills to young people. Some colleges do not even have working Wi-Fi which is essential,” the union said in a statement.

“NEHAWU is still busy forcing the Department of Higher Education and Training to implement in full our settlement agreement following our strike in 2019. The union will not rest until all our demands are fully met,” NEHAWU said in a statement.

Previous:  Residents call on Cele to act after homes in Port Elizabeth petrol-bombed