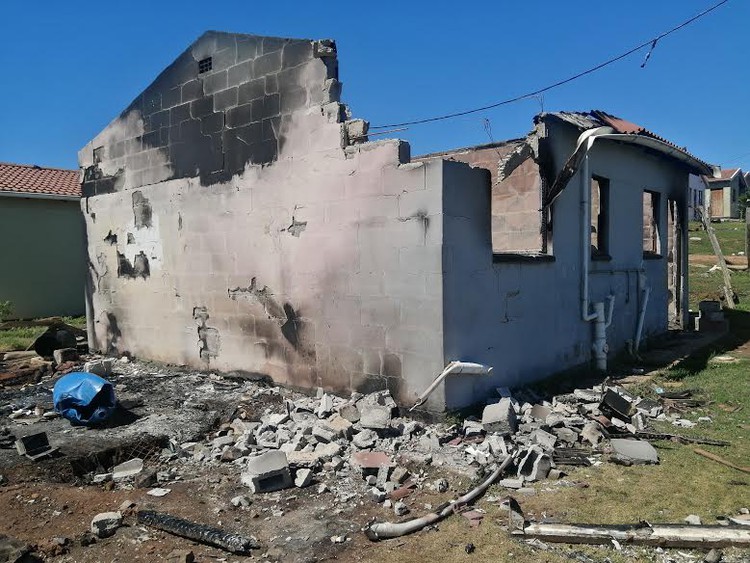 Residents of ward 29 in Port Elizabeth have accused Police Minister Bheki Cele of reneging on a promise they say he made in 2018 to send in the army to reduce escalating crime in the area. They also demanded a new police station be built in Booysens Park.

This follows an incident last Thursday when a group of about 200 people from Booysens Park and neighbouring Pollar Park petrol bombed and stoned four houses. Two of the homes were completely gutted while one was partially burnt and the other had its windows smashed in.

The chaos followed the shooting of a man from Pollar Park last Monday at Qunu taxi rank. A woman, who allegedly witnessed the shooting, was confronted by gang members to identify the shooter. When she was unable to do so, the group attacked her home.

The woman’s 50-year-old mother recalled returning home on Thursday to find her four-roomed house in flames. Both their names have been withheld because of safety concerns. “I was called at about 5:35pm by my neighbours. My neighbour said it was an armed mob from Pollar Park. She asked me to ask the Gelvandale Police Station police to escort me with fire fighters because the two fire engines and two police vans from Bethelsdorp were chased away by the gang,” she said.

The woman said everything inside her house was set alight. “According to my neighbours the gang also fired several shots at my son as he got off his work transport,” she said. The woman said she was escorted to her house by police and emergency services.

The mother, who worked as a domestic worker, said the gang had traumatised her family and destroyed their entire life’s savings and a R23,000 stokvel collection. “I am as good as dead. My daughter has a drug problem and this gang wanted her to tell them who shot their member at the taxi rank. She told them that she does not know the suspects but the gangs chose to destroy my house. I am left with the only clothes that I am wearing. All my important documents including my ID, were burnt in the fire,” she said.

“I blame Bheki Cele. In 2018 at Booysens Park Community Hall, we told him that Bethelsdorp Police are useless and corrupt. We were being charged a protection fee for having beautiful houses.

“Cele promised to build us a police station which is currently under construction. He also promised to deploy soldiers. But that never happened and we are still living in fear,” she said.

After destroying the Booysens Park home, the gang went to Marikana, apparently in search of a man named Menalik “Mena” Malieba.

Resident Shandre Oliphant said she saw three groups coming into the community carrying firearms and petrol bombs. They torched the first house and then shot at the electricity transformer, leaving the street in darkness.

“For seven years we have been living here and crime was too much because those gangs terrorise us and the police are scared of them. They were robbing immigrant spaza shop owners and our homes but ever since Mena and his group started to fight against these gangs, crime dropped drastically,” she said.

Malieba told GroundUp that since the age of 15 he had witnessed his community falling prey to gangs. “I called a meeting on Friday with the residents and asked for a way forward because we cannot continue living like this. The police do nothing about these gangs. Immigrant spaza shop owners, loan sharks and residents with beautiful houses are asked protection fees by these gangs. We are not gangsters but we are fighting against the gangs,” Mena said.

Police spokesperson Colonel Priscilla Naidu urged residents to stop making allegations against the Bethelsdorp Police. Naidu said that only one case of arson had been opened last week and denied that police did not intervene against gangs.

“Police are urging residents to report the culprits so that arrests can be made. In many instances, the residents do not open cases.” He said criminals were living in the community and should be reported by community members. “The community police forum and the police are working closely with community leaders in that area,” she said.

In response to Cele’s promise to build a police station, his spokesperson Lirandzu Themba said: “This project is still going through normal and due processes. There have been several multi-disciplinary stabilization interventions in the affected northern areas. The deployment of the army is not up to the Minister, he cannot make that call on his own as it is the prerogative of the President.”

CORRECTION: The man who was killed was originally identified as a member of a gang, but we have since been informed that this was not the case.

Next:  Six arrested during clashes between SASCO marchers and police in Pretoria