“I am trying my best to get them a house or a decent place to live in,” says ward councillor 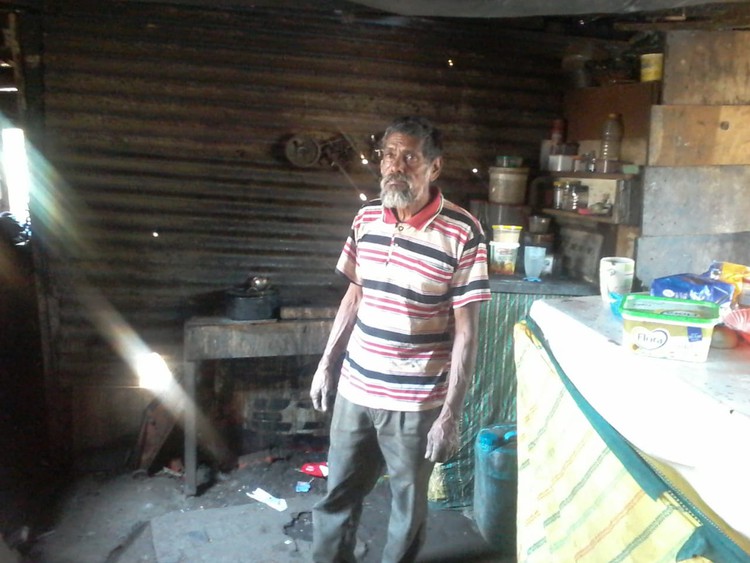 Robin Kooseelal lives in a dilapidated shack with 12 other family members in Redcliffe, Verulam, which is north of Durban. Photo: Nokulunga Majola

Robin Kooseelal is 65-years-old and has lived in Redcliffe, Verulam, north of Durban, for more than 20 years.

Kooseelal lives in a three-room shack with 12 other relatives, the youngest member is his one-month-old grandchild. His wife Anita, 53, has been in and out of hospital for several years.

Their home is weathered and riddled with holes and broken windows. Often during heavy downpours, the family seeks shelter with neighbours or they sleep in an old car in the yard.

“I came here 22 years ago from Giyani. We struggle with everything from water to electricity. We use firewood which we fetch from a forest about two kilometres away to cook or boil water,” said Kooseelal.

He said the family also uses a pit toilet next to the shack. Kooseelal said he has tried “everything to find a job” but to no avail. He currently fixes cars in his yard with his son, but they mostly rely on social grants to buy food and other necessities.

“My children are all unemployed and they all depend on this grant and the little I make from fixing people’s cars. A week often goes by without making anything. We are tired of living like this,” said Kooseelal.

His son Keran, 34, said he has been looking for a job without any prospects so far. “It’s not like we have not been trying. There are just no jobs,” says Kegan. “We are overcrowded in this house, chances are if any of us gets [Covid-19] we are all at risk of getting infected.’”

Ward 59 Councillor Chris Langa said he is aware of the Kooseelal family’s plight. “I have known the family for a very long time. I am trying my best to get them a house or a decent place to live in. Their living situation is really worrying especially since they have small children in the house.”

Next:  Millions of rands in lottery funding for mysterious music festival

Previous:  Toilets overflow for a month as City drains clog up