No trains, no hope? We show just how bad things are at PRASA. 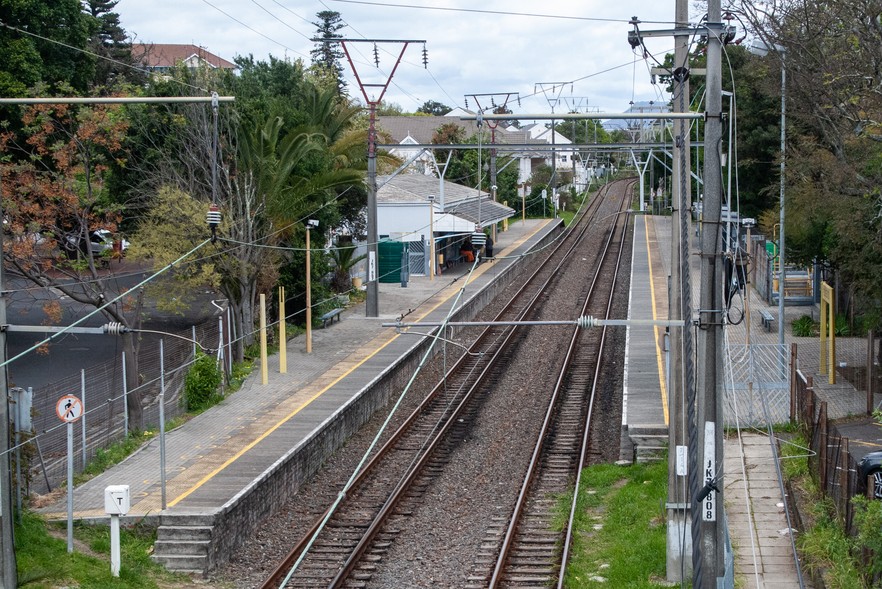 One of the main consequences of the grand scale corruption over more than a decade is that there are not enough trains. Photo: Ashraf Hendricks

1. Revenue from train fares has plummeted while the state subsidy has skyrocketed

Nothing quite conveys the disastrous state of PRASA like graph 1 below. What it shows is this: In 2008, PRASA collected R1.2-billion in fares (blue line). Thirteen years later, in 2021, it collected R178-million.

Yet over that period PRASA’s government funding (green line) mushroomed. Its operating subsidy ballooned from R2.6-billion to R8.8-billion. Its capital subsidy grew from R282-million to R2.9-billion (with a high of R4.3-billion in 2019/2020).

In the graph, total revenue looks healthy. But PRASA includes the money that it receives from the government as a subsidy in its revenue calculations - first, its operational subsidy and then, in the 2020/21 annual report, also its capital subsidy.

The steady climb in the operational subsidy - the green line - is mirrored by the depressing trajectory of the fare revenue. 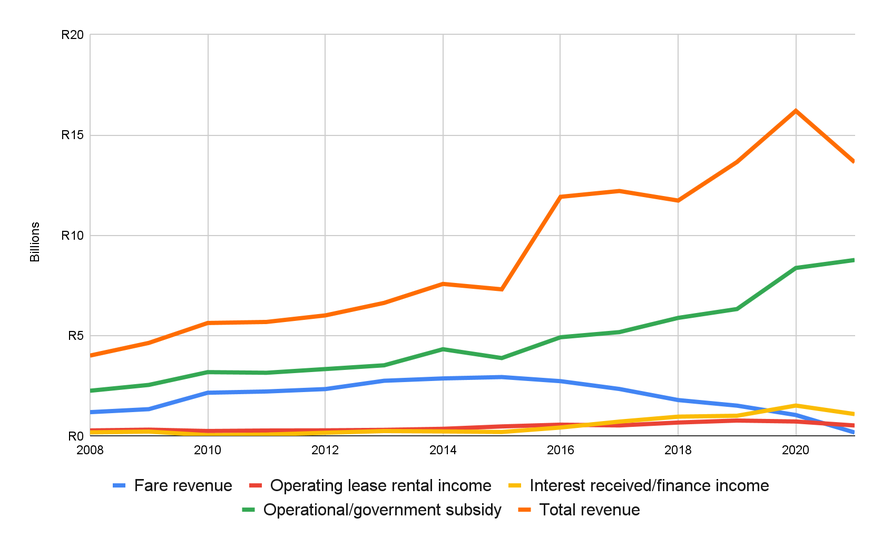 Commuter rail is by nature a subsidised mode of transport. Taxes are used to reduce the cost of a passenger’s journey. But in the next graph we see how fares have formed a smaller and smaller share of PRASA’s total revenue.

By the end of the 2019/2020 financial year, interest earned on its cash reserves contributed more to PRASA’s revenue than income from fares or from its rental properties.

We could interpret this as showing a decision by the government to reduce fares and wholly fund train transport from taxes - like Spain recently decided to do. But this is not the case. What we see is what happens when passengers can’t take any trains. 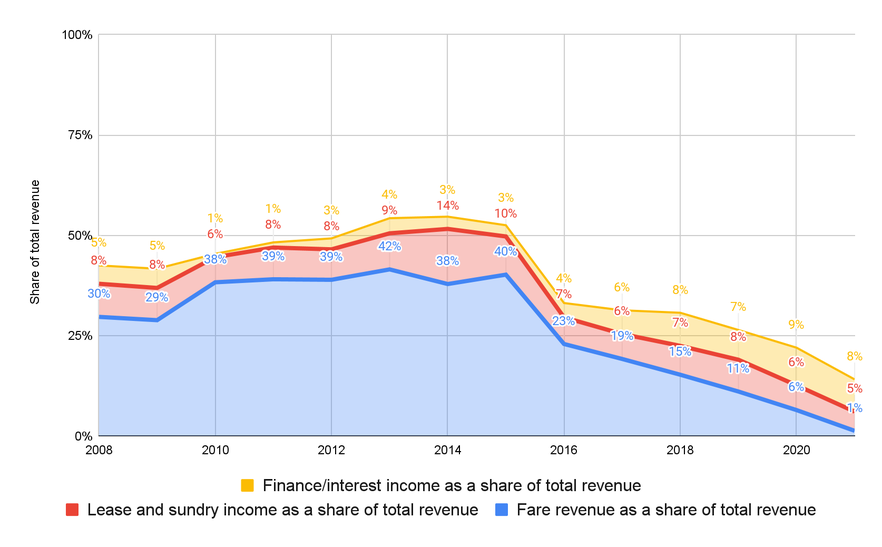 3. The number of passenger trips has plummeted

The graph below shows the collapse in passenger trips.

The decline in passengers is largely the result of there being not enough trains. According to Statistics South Africa’s National Household Travel Survey, 2020, the single biggest reason nationally why people are not using trains is that trains are simply not available to them.

Covid all-but collapsed commuter rail. StatsSA’s latest Land Transport Survey, released on 19 September, shows that rail is not recovering, despite all promises. The number of passenger trips recorded in June and July 2022 is lower than the same period last year. 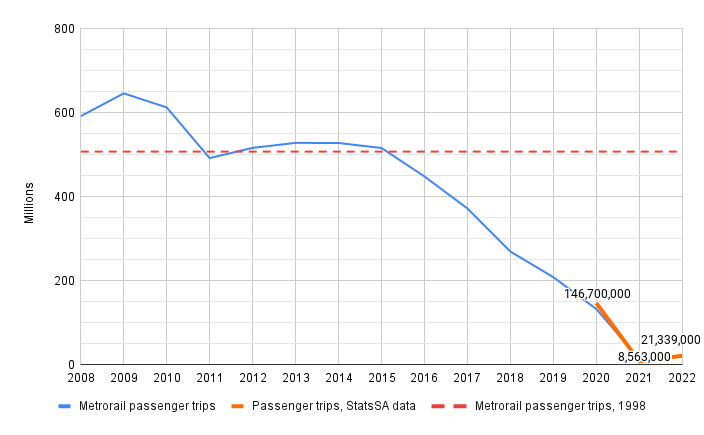 4. PRASA is unable to spend its capital

In the graph below, using nominal (not taking into account inflation) amounts from PRASA’s annual reports, we see PRASA’s investment spending in red, compared to its available cash reserves.

Earlier this month, the Department of Transport came before Parliament’s Standing Committee on Appropriations to explain the Passenger Rail Agency of South Africa’s (PRASA’s) “perennial underspending on capital infrastructure”.

According to the media statement released on behalf of Sfiso Buthelezi, the chairperson of the committee, “the unspent funds should be given to other departments that are actively spending their budgets on service delivery”. There’s an irony in this; Buthelezi himself was the chairperson of PRASA between 2008 and 2014.

In his statement, Buthelezi expressed the committee’s “concerns with PRASA’s poor record on project and contract management”. Again, ironic, since the dodgy contracts from Buthelezi’s time as chair are a leading cause of PRASA’s inability to spend its capital budget. 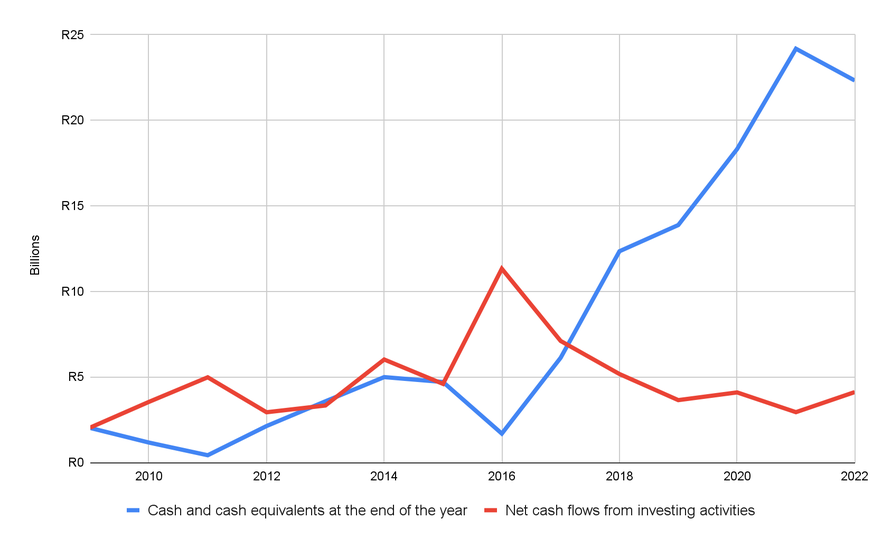 5. Irregular expenditure has gone through the roof

Most of this irregular expenditure stems from a reevaluation performed under the instruction of the board that replaced Buthelezi’s board, led by Popo Molefe. As recorded in the 2015/16 annual report, R9.8-billion was discovered from the years when Buthelezi was chairperson. This figure was to increase as more irregularities were uncovered.

Earlier this year, Chief Justice Raymond Zondo recommended that the Office of the National Director of Public Prosecutions consider instituting a prosecution against Buthelezi for the award of the Swifambo “tall trains” contract, in his State Capture Commission’s report into PRASA.

In 2005, Buthelezi was appointed to the board of PRASA’s predecessor, the South African Rail Commuter Corporation. Then, he was appointed as chairperson of PRASA’s board, from its inception in 2008 until 2014.

In his outgoing letter in PRASA’s 2013/24 annual report, Buthelezi boasts of a company that is “resilient” and “stable”. He said that PRASA’s clean audit was a “testament to the hard work and focus of the Board in putting in place controls and governance protocols”.

The very next year, the PRASA’s “clean” audit proved paper-thin, with the publication of the Public Protector’s Derailed report, and the years that followed mocked the claims of stability and resilience in Buthelezi‘s boasts. 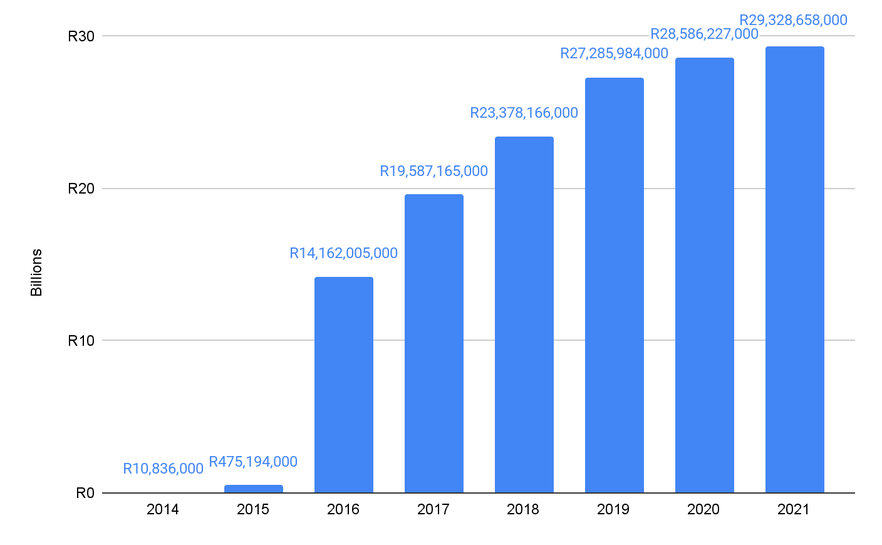 The graph below shows PRASA’s average fare revenue per trip.

The blue line is calculated from PRASA annual report data while the red line comes from StatsSA data from the 2020 and 2022 Land Transport Surveys.

The increases appear more or less in line with inflation until 2020, but then there’s a massive spike.

When we take into account that since 2020 PRASA now only issues single tickets, instead of discounted weekly and monthly tickets as in the past, the rise in fare per trip makes sense. 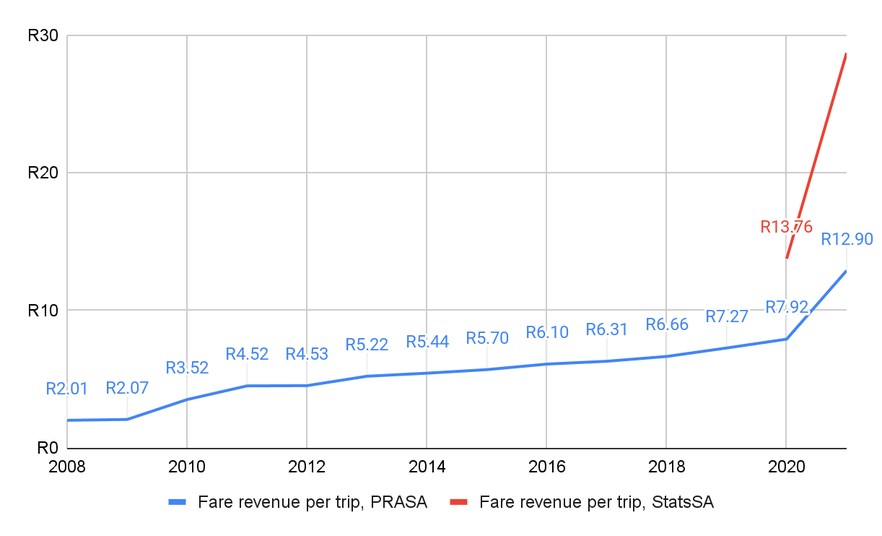 Graph 6. Fare revenue per trip. Data from PRASA and StatsSA

The graph below shows how much a single trip (one person making one journey) costs, from different perspectives. 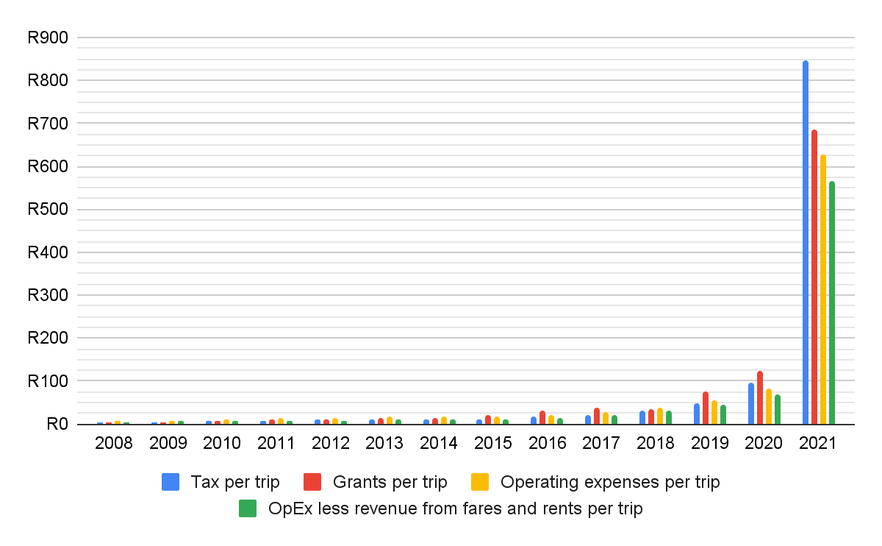 8. PRASA operational costs dropped only because it has fewer trains

A superficial look at the graph below suggests that after years of rising operational costs, PRASA is getting these costs under control. But this is a mirage.

The red line shows two consecutive years, 2019/2020 and 2020/2021, when operational costs declined. The decline is not due to reducing staff costs, as the yellow line shows a gradual increase and then stabilisation in staff costs.

The notes to the annual reports show that the main drivers of the decreased costs are due to a decline in the number of trains running. This results in drops in the costs of fuel, security, and repairs and maintenance to trains and stations.

Without maintenance, there are simply not enough working trains to put on the tracks. 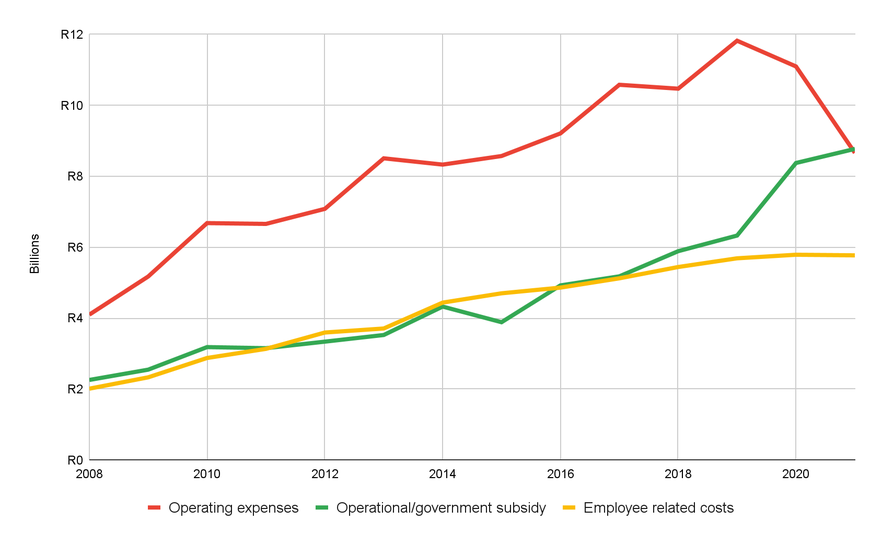 9. PRASA’s investment has increased, yet the value of its assets is dropping

Perhaps this underspending and high cost to the public purse per trip could be forgiven if the public could be assured that the spending was going towards building railways infrastructure that could, eventually, accommodate millions of passengers per day.

Then, PRASA decided to cancel its security contracts without replacement in late 2019, and a catastrophic decline in assets followed.

In a note to the annual report for the 2020/2021 the Auditor-General states that there was not “sufficient appropriate audit evidence that management had properly accounted for property, plant and equipment”. 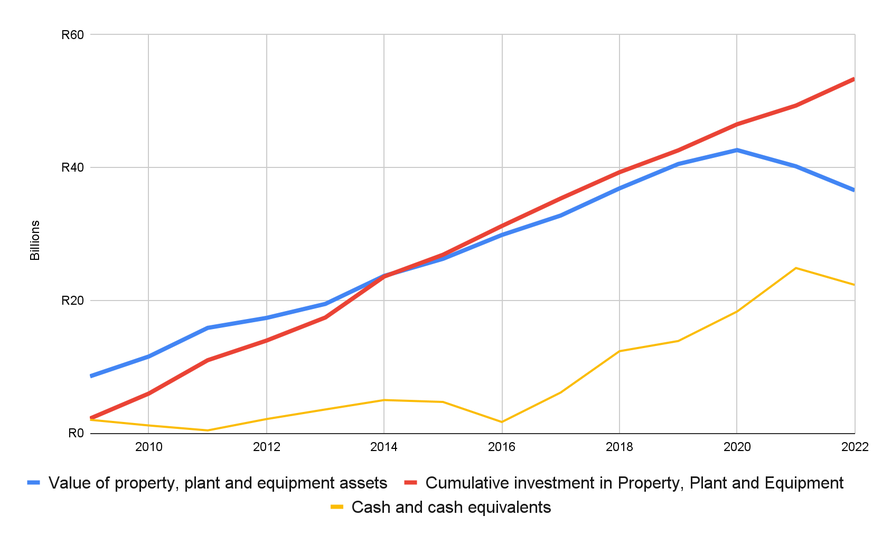 Graph 9. Value of assets versus investment in property. Source: Our calculations from PRASA annual reports

In the following two graphs we see the number of trips on different modes of transport used in the provinces that have commuter rail services, in 2013 and in 2020. (Cars are not included.) Minibus taxis have absorbed many rail commuters in Western Cape and Gauteng. The picture in the Eastern Cape and KwaZulu-Natal is less clear. 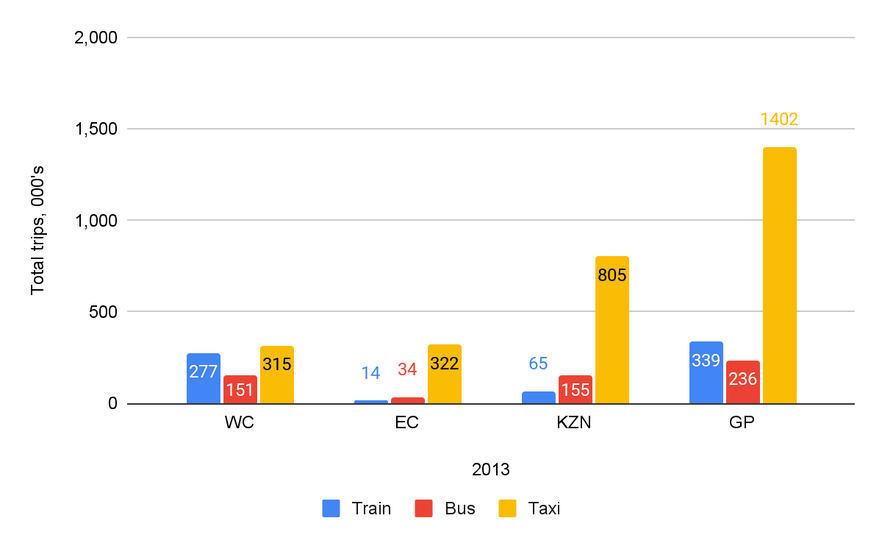 Graph 10a: How people travelled in 2013. Data from StatsSA National Household Travel Survey, 2020. 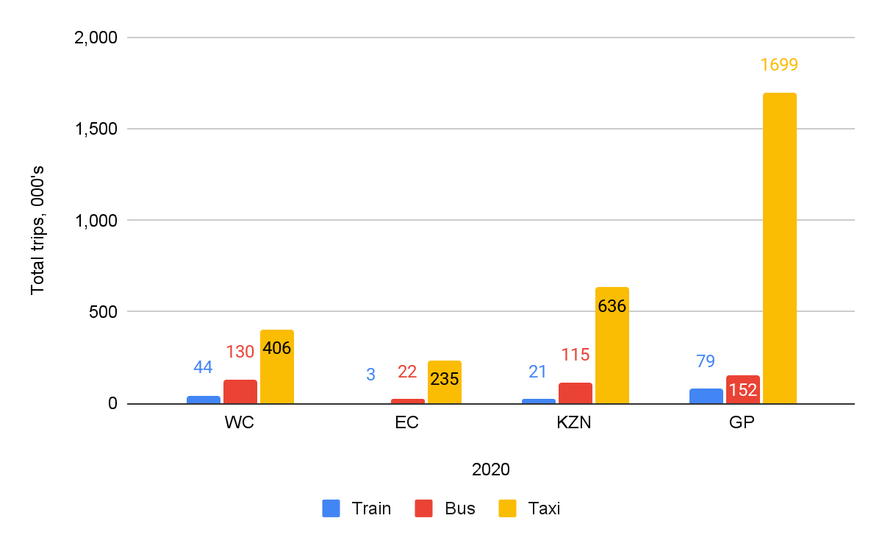 Graph 10b: How people travelled in 2020. Data from StatsSA National Household Travel Survey, 2020.

11. The shift away from rail comes at a high cost for commuters

The graph below shows that this shift from rail to minibus taxi has come at a very high price. In the Western Cape in 2020, the average monthly cost for a commuter on a minibus taxi was R636, in KwaZulu-Natal it was R731, while in Gauteng it was R1,198.

It is unclear whether the relatively high cost of train transport in Gauteng includes Gautrain fares, but nevertheless, the average cost per month to the commuter is R407 less for the train user than the taxi user in that province. In the Western Cape, the cost of a train per month is just over half of a month’s worth of minibus taxi fares.

Parliament (and the National Treasury) might be considering pulling money from PRASA, but fewer trains mean a poorer public. PRASA’s crisis is South Africa’s. 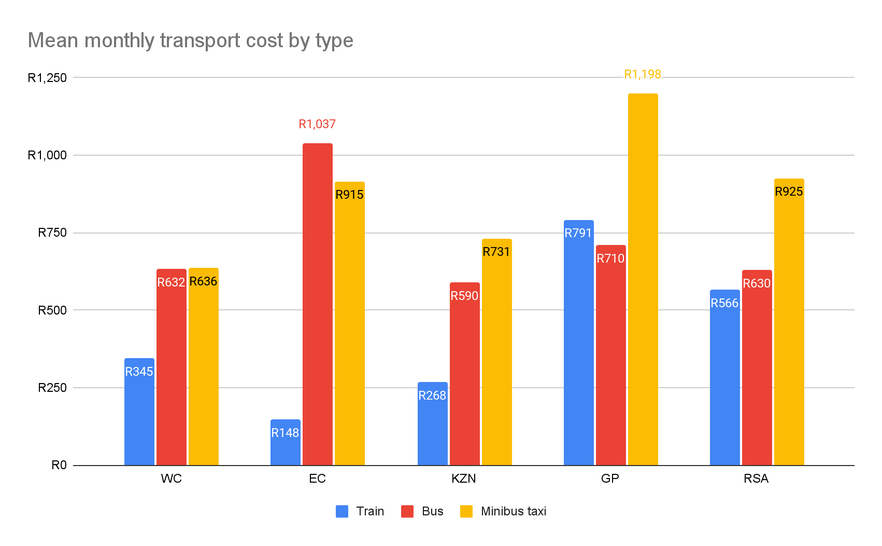 Graph 11: The cost of travel by mode of transport. Data from StatsSA National Household Travel Survey, 2020.

The graphs and data used in this article are available here: PRASA over time.

Previous:  Lack of fuel brings Tshwane buses to a stop