“The air we breathe is killing us”: “Deadly Air” case finally goes to High Court 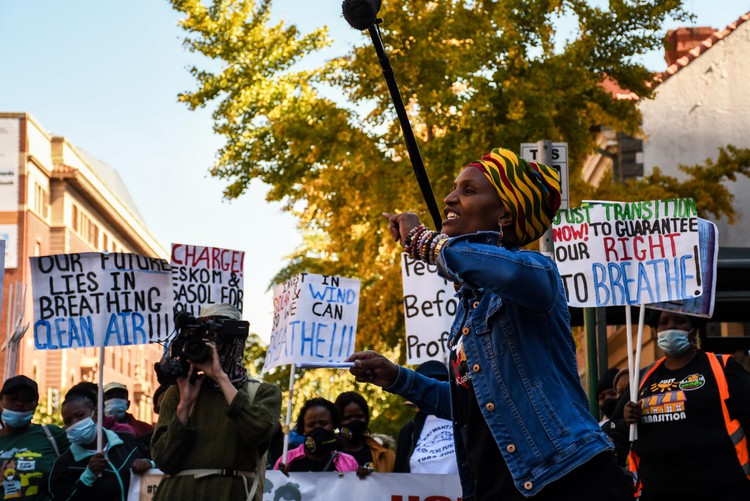 Civic organisations in coalition with Life After Coal stood in solidarity with applicants outside the Pretoria High Court on Monday. Photo: Julia Evans

Over 100 people picketed outside the Pretoria High Court on Monday to show solidarity with the “Deadly Air” case, which had its first day of court proceedings.

The case deals with air pollution in the Mpumalanga Highveld. It was brought by two environmental activist organisations – groundWork and Vukani Environmental Justice Movement in Action (VEJMA). They are represented by the Centre for Environmental Rights.

The organisations have asked the court to order Minister of Forestry, Fisheries and the Environment Barbara Creecy to address the pollution.

Mpumalanga, home to 12 of Eskom’s coal-fired power stations, was ranked among the world’s worst hotspots for nitrogen dioxide and sulphur dioxide emissions by Greenpeace in 2019.

Thabo Sibeko, a coordinator from EarthLife Africa who was outside the court, addressed the crowd, saying that many people die on the Highveld because of pollution from coal power stations.

Sibeko told GroundUp that many children don’t go to school during winter because of pollution-related illnesses.

Palesa Ntaopane, from Sasolburg, said that the Natref refinery is a big problem for them. “When you are at home, when you are in your room you can see the flares, and there’s this funny smell sometimes, and it affects us. Most people really get sick because of it.”

Ntaopane blames her sinus problems on the pollution.

Nandie Khanye, from Ogies in Mpumalanga, said there are four mines and two power stations surrounding her community. “Every morning when we wake up there is just black dust in our yards. Everywhere. There’s no more fresh air,” said Khanye.

VEJMA coordinator Promise Mabilo, from Emalahleni, said, “[The lawyers] are assisting the communities. What they want is the enforcement of the law to make sure that people on the highveld live in a healthy environment.”

Advocate Steven Budlender argued before the court that the harmful air quality in the Highveld was a constitutional violation to those living and working in the area.

Budlender said that according to the environment department’s own reports, 10,000 people die per year as a result of the poor air quality in Mpumalanga.

“This is a case where the department’s own study says there is a problem … and says that the problem is that there is ineffective implementation,” said Budlender.

He said the burden of the health impact fell most heavily on poor people who have no other place to live, rely on jobs in the area, and do not have access to proper healthcare.

The Department gazetted the Highveld Priority Area Air Quality Management Plan in 2012, which set out a plan to reduce air pollution in Mpumalanga to a level that complies with national standards.

However, nine years later none of the goals set out in this plan have been achieved, according to Budlender.

Budlender said that the court should make an order that will force the minister to implement regulations to enforce the Highveld plan.

The case will continue on Tuesday with the State’s argument.

Next:  Unfinished RDP houses a crime den in Nyanga

Previous:  No budget for janitors at Cape Town informal settlement