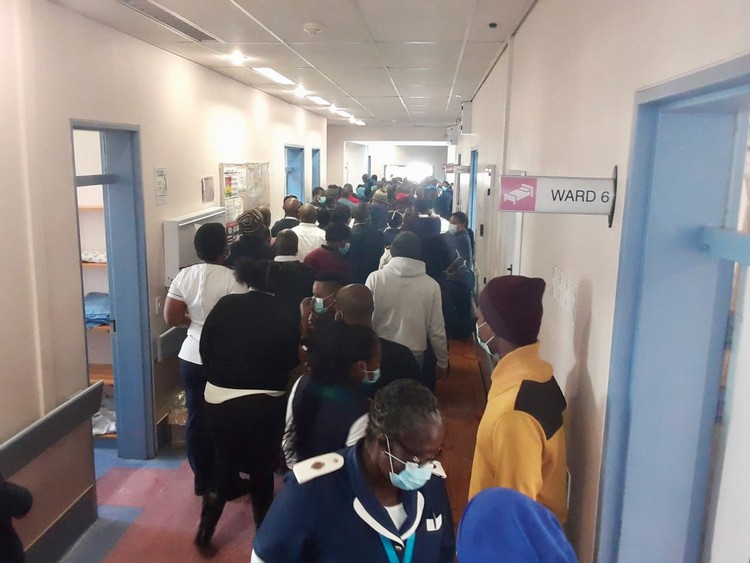 Health workers at Frontier Hospital went ward to ward calling on their colleagues to join them. Photo: Johnnie Isaac

Protesting health workers at Frontier Hospital in Komani (formerly Queenstown) disrupted services as they entered each ward calling on their colleagues to join them.

The protest came after one of their colleagues contracted Covid-19 and is receiving treatment in another hospital.

Democratic Nursing Organisation of South Africa (DENOSA) Chris Hani region chairperson Andisile Pampilana said they have been appealing to the Eastern Cape Department of Health for some time about a lack of personal protective equipment (PPE) as well as vacancies at the hospital.

“The SG [Superintendent-General] was here two weeks ago and he promised to deliver to the cries of the employees,” said Pampilana.

A nurse, who was part of the protest, Althea O’Reilly, said Frontier Hospital staff are yet to be screened or tested. She said when they want to be tested they were told to wait until they get symptoms.

Eastern Cape health department spokesperson Sizwe Kupelo said: “We wish to appeal to all the health workers to understand and trust that we take their concerns very seriously. We are doing everything in our power to make sure that all PPE is available. We have already procured and distributed PPE to various institutions.

“We have already employed over 800 professional nurses, enrolled nurses as well as health promoters in our quest to deal with this invisible enemy.”

He said the department is concerned about the growing numbers of employees that are getting infected while rendering healthcare services in the communities.

“We are with them and we call upon them to join hands in the fight,” said Kupelo.