Streets in central Uitenhage pile up with garbage for months 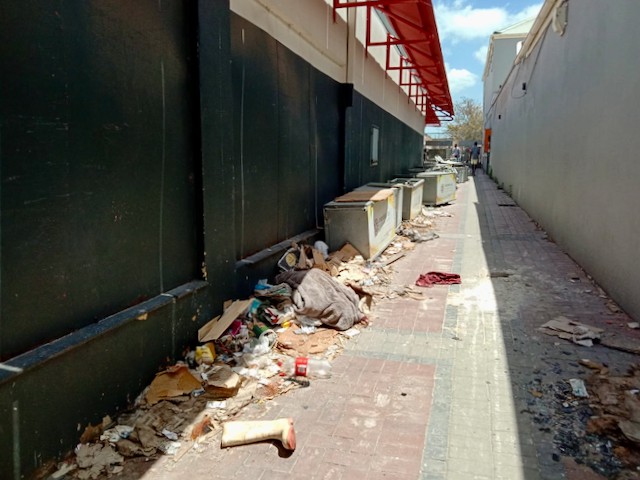 This alley in the business centre of Uitenhage is one of many that have been left uncleaned for three months. Photo: Thamsanqa Mbovane

Litter has been piling up in alleyways of central Uitenhage for the past three months. Shoppers and pedestrians are forced to breathe the awful stench. Two filthy alleys, off busy Market Street, house 50 hawker stalls.

Resident Thembile Statu said he no longer ventures there to buy his fruit and vegetables. “There is a smell of faeces in the CBD and I always avoid Market Street. This is the same street that houses municipal officials [town hall],” he said.

A hawker, who did not want to give his name, said business is dropping off as a result of the stink. He said homeless people relieved themselves in the alleys.

Pumla Rasmeni, a resident, said she has been going to the municipality to complain, but was told to report the matter to Port Elizabeth, where senior waste management employees are stationed.

Since establishing a service delivery agreement with the municipality in 2003, cleaning central Uitenhage is monitored by the Nelson Mandela Development Agency (MBDA). Luvuyo Bangazi, its spokesperson, said its contract with the cleaning service had ended after three years.

“Prior to that we had advertised for a new contract well in advance, but unfortunately on the eve of the new contract being awarded, a bidder objected and that has halted the process. We are in the process of resolving the objection,’ said Bangazi.

He said that a temporary service will be in place by next week.

“We regret the situation and kindly ask for the public to bear with us as we conclude the process with speed,” he said.

Previous:  “It’s fair to conclude that we do not have what is called a school” says principal