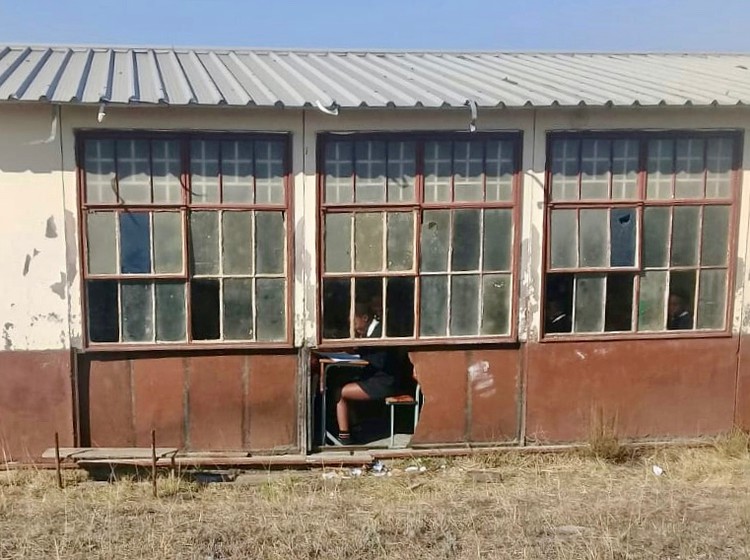 A learner in a class in Zanokhanyo Junior Secondary School in Butterworth, Eastern Cape. In July 2019 parents shut down the school because it was falling down. Archive photo: Sababaliwe Dadaboshe

The Department of Basic Education’s (DBE) continual failure to meet its own deadlines for attaining Minimum Norms and Standards for School Infrastructure was the focus of a webinar on Thursday.

Equal Education (EE), along with Equal Education Law Centre (EELC), provided a virtual platform for learners, teachers, organisers and researchers to discuss the progress in government’s implementation of norms and standards.

The education department’s first deadline to ensure that no school was without water, electricity, or sanitation was 29 November 2016.

This deadline was missed by several provincial education departments.

The next deadline is 29 November 2020 by which time schools were also meant to have fences, telephones, and internet.

Although progress has been made, Tarryn Cooper-Bell of EELC said it is not happening fast enough. “We can’t say they aren’t doing anything; they’re just doing it very slowly. They’re missing deadlines that they themselves chose and are not meeting. By missing deadlines, they are disregarding the dignity and safety of learners.”

The co-head of research at EE, Hopolang Selebalo, said that the “lack of political will and lack of urgency by the DBE” in addressing infrastructure backlogs has led to learners being injured and losing their lives.

Ndzamela said that although they are grateful to the community for the effort, the quality of the materials is concerning. He said the school still uses pit latrines, many of which are dilapidated and have no doors. The 350 girls and 367 boys at the school share four toilets. The 29 staff members also share four toilets, of which two were provided only due to the Covid-19 pandemic.

“It’s fair to conclude that we do not have what is called a school, but we have rooms that are knitted together and conveniently termed ‘a school’.”

“Schools are using their allocated funds to develop school infrastructure, thereby ignoring all other activities those funds were intended for,” said Ndzamela.

Evidence Puseletso Kekana, a grade 11 Equaliser from Mmatshipi Secondary in Limpopo, said learners at her school still have to use pit latrines. At the peak of the Covid-19 pandemic, the water shortages and lack of sanitation at the school became a major concern.

Norms and Standards were legislated in 2013. The policy also requires provincial education departments to provide progress reports to Minister Angie Motshekga. Following a judgment by the Bhisho High Court in 2018, these progress reports were to be made publicly available.

Despite this ruling, Selebalo said EE has had to submit a Promotion of Access to Information (PAIA) request to the department for access to the reports.

“It’s reported in such a haphazard and inconsistent way that it is difficult to extract any kind of information from those reports,” he said.

The department had not yet commented at the time of publication.

Next:  Streets in central Uitenhage pile up with garbage for months