But it will require leadership and tough negotiations with drug companies 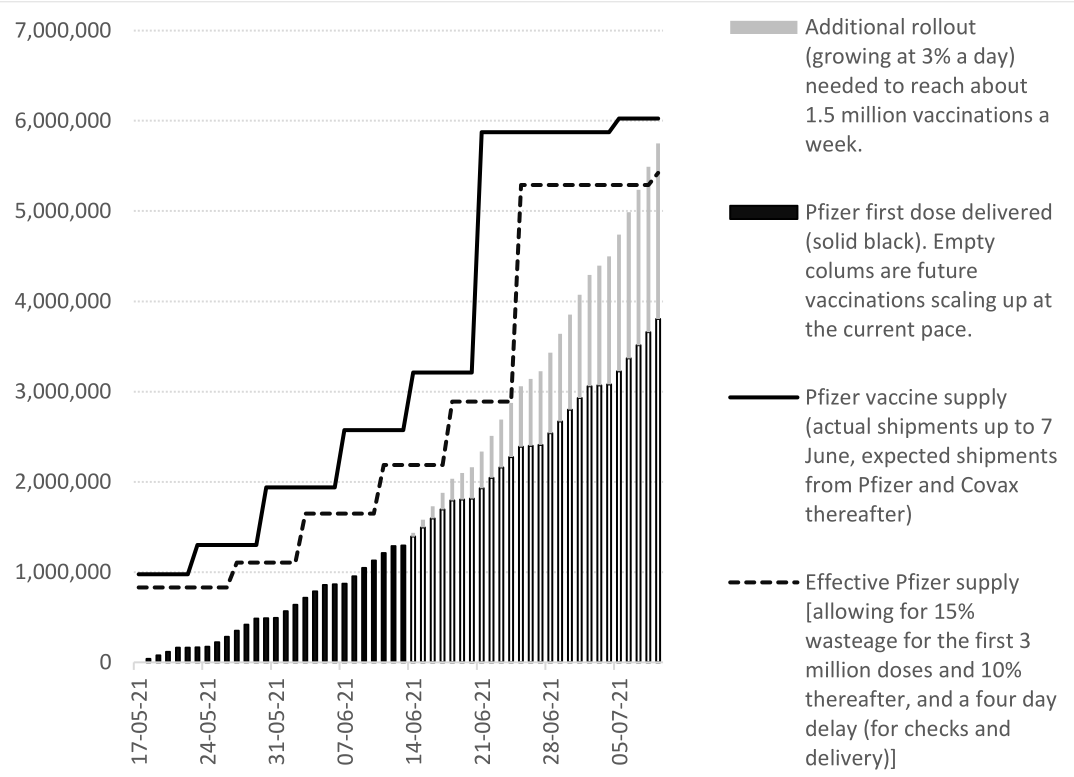 This graph shows vaccine supply and use until now, and for the next few weeks assuming the rollout continues to accelerate at its current rate.

South Africa’s vaccine rollout faces two major challenges: getting the vaccines we already have into the arms of the people who need them urgently and ensuring that deliveries of vaccines continue to grow. The number of vaccinations has grown each week, but too slowly. Planners might be tempted to dial down the pace of the scale-up – perhaps out of concern about some of the ordered vaccine shipments arriving late or not at all. This would be a big mistake.

Early last week (the fourth week of the programme) the total number of Pfizer vaccines administered through the government’s programmes reached one million. The programme is continuing to speed up, with a daily total of over 80,000 new vaccinations (on weekdays) and a weekly total of about 430,000. This is good news.

But there continue to be unused vaccines in the system. As of 13 June, the government’s Phase 2 vaccine rollout reported that 1,293,649 million people received their first shot of the Pfizer vaccine. At that point, 2,574,000 doses of the Pfizer vaccine had arrived in the country. We argued last week that South Africa was not vaccinating at a pace fast enough to meet the available supply coming into the country. This remains the case, even taking into account wastage and delays in getting vaccines to vaccinations sites.

The graph at the top of this article plots the scheduled supply of Pfizer vaccines and the number of vaccinations according to various assumptions.

The solid and dotted lines show the supply of Pfizer vaccines. The dotted line shows availability given wastage and the delay in reaching the provinces. In total, more than six million Pfizer doses would have been delivered or are expected by the end of June. This includes a delivery of 1,272,960 doses from Pfizer on 21 June and our first delivery of an additional 1,392,000 Pfizer doses through Covax at about the same time.

We need to pick up the pace of vaccination. The solid black columns in the graph show the actual cumulative number of Pfizer vaccinations until now. The gap between the columns and the dotted line represents available, unused, vaccines in South Africa. It probably includes some unreported vaccinations in sites where records are captured first on paper and later updated to the electronic system. Government has taken steps to address this by requiring all vaccinations to be updated within 24 hours.

The empty columns to the right of the solid black columns show the total number of vaccinations assuming that the number of doses administered daily grows at its current pace. It shows that if the vaccination programme continues expanding at this pace, it will be too slow to absorb the stock of vaccine available. The gap between the vaccinated and the available stock of vaccine will widen and widen.

The grey columns show the additional vaccinations (growing at 3% a day) required to use up the available supply by early July. This would require total numbers of Pfizer vaccinations per week to reach 900,000 next week, 1.1 million the following week (21-27 June), 1.3 million in the week from 28 June to 5 July, and 1.5 million the following week. Put another way, this week we must vaccinate more than twice as many people as last week, and by the beginning of July we must be vaccinating three times as many people per week as last week.

This is also the pace required to get back on track to achieve the medium-term vaccination targets announced by the government earlier this year.

The graph also shows that there is a big potential catch: We can only scale up like this if suppliers keep vaccine deliveries arriving as promised – and sources inform us that Pfizer is reportedly telling the South African government that it will be dropping its delivery down to 150,000 on 5 July. If this happens, South Africa will have to slow down the rollout.

There is a worrying lack of clarity about Pfizer deliveries in July. The government announced in April that Pfizer has been contracted to deliver 16.5 million doses in the third quarter (July-September), i.e. an average of more than 1 million doses per week. A further 17 million doses are expected from Pfizer by the end of the year. But the delivery dates are not set in stone.

Pfizer not only demands a down payment on every order (which the government has paid), but it demands payment in full for each quarter, in advance.

Vaccine producers have enormous market power right now and can set contracts entirely on their own terms. Even so, it is important that the government be transparent about what is going on. Public shaming of companies is also a form of power. We must insist that in return for handing over billions of Rands to Pfizer, we get clear and consistent deliveries from them.

The other shock to South Africa’s vaccine supply is, of course, from Johnson and Johnson. US regulators over the past few days declared 60 million doses of this vaccine unusable. The two million doses of this vaccine at Aspen Pharmacare’s fill and finish facility in Gqeberha have, accordingly, been condemned by South African regulators as unusable. Production of the vaccine in the US continues to be stalled. Some vaccine batches have been cleared, and the Department of Health announced on Friday that South Africa will be receiving 300,000 doses “as a matter of extreme urgency” from that cleared supply. This is a tenth of what South Africa expected to be delivered from Johnson & Johnson in the second quarter.

South Africa has ordered 12 million doses through Covax, and we are expecting the first shipment (1.3 million Pfizer vaccines) through this channel in June. More clarity is needed as to the delivery times for the rest of South Africa’s Covax order. The supply of vaccine to Covax was undermined by India’s decision not to export any vaccine in 2021, but the recently announced US decision to supply 500 million doses of the Pfizer vaccine to Covax should help alleviate that supply constraint.

If so, then this is a big mistake. We need to be getting shots in arms as fast as possible while keeping pressure on vaccine suppliers.

Tough negotiation is necessary to avert a supply crunch in early July. But there is no point in slowing down the rollout now – as the third wave gathers momentum – in case future vaccine deliveries are less than expected.

KwaZulu-Natal and the Western Cape have been relatively good at getting shots into arms. The Western Cape has announced a plan to use the Cape Town International Convention Centre as a mass vaccination site, capable of vaccinating 4,000 people per day. KwaZulu-Natal is also planning mass sites. We need to keep planning for such sites, and provinces where the rollout seems particularly slow (notably the Eastern Cape) need to be assisted to improve capacity to deliver.

Previous:  What is the state of South Africa’s health system? Four easy pieces