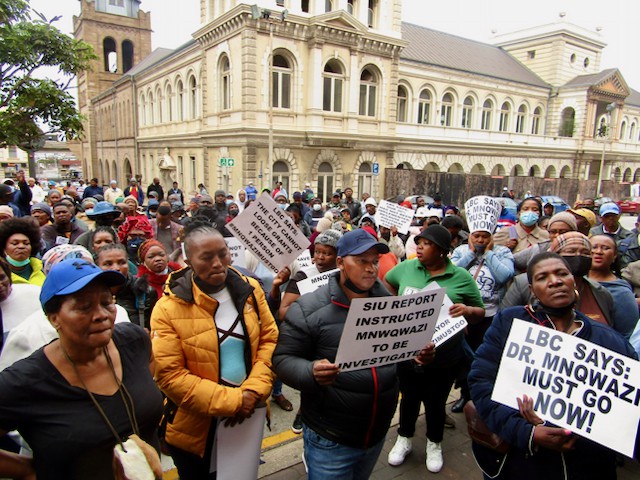 About 200 people from the Nelson Mandela Bay area protested outside Feather Market Hall in Gqeberha on Monday. The protest is the latest in a battle over the allocation to Small, Medium and Micro-enterprises (SMMEs) of a 30% share of municipal tenders.

Sicelo Kubashe Business Consultants (SKBC), which managed the allocation, was suspended last November. The leadership of the Local Business Council is angry that instead of appointing another consultant, acting city manager Noxolo Nqwazi has appointed an internal manager for the process.

On Monday the protesters called for Nqwazi to be fired. “If she goes, then everything will be in our hands,” shouted Masixole Mashelele, general secretary of the Local Business Council.

He said that after a similar protest last week, leadership of the Local Business Council had met Nqwazi, Mayor Eugene Johnson, and several mayoral committee members. He claimed it had been agreed then that a new consultant would be appointed by last Friday to oversee the allocation of the 30%, which amounted to R400 million.

But instead, Mashelele told the meeting, Nqwazi had instructed someone else to head the municipal allocation committee.

Deputy chairperson of the Local Business Council Lindile Bobani told the crowd, “All Councillors must also join us in our struggle because we have voted for them.”

Spokesperson for Mayor Tango Lamani said, “When this new [governing] coalition came into office, they found out the processes to appoint the service provider to implement and allocate the 30% share had problems. The service provider is under investigation currently.”

“The mayor has sought the advice of the municipality’s legal department and she has been told the municipality may not interfere with the legal processes that are currently in place against the service provider.”

“Whilst there is ongoing investigation of the previous service provider, work must continue. Doors will always be open for talks with SMMEs,” said Lamani.

Sicelo Kubashe, of SKBC, told GroundUp “I am aware that the municipality has raised a concern on the procurement process followed … I’m waiting for them to come back to me when they have findings or decisions.”

Next:  Children of immigrants excluded from tertiary education