After their shacks were demolished during the lockdown, families have been left in dire straits and at the mercy of criminals

Since the Covid-19 lockdown started, law enforcement officers have destroyed shacks belonging to about 130 former backyarders in the course of at least ten operations at Empolweni informal settlement, Khayelitsha, Cape Town.

Building materials were seized to prevent the shackdwellers from rebuilding. Residents sought shelter in a community church nearby and in an abandoned building. Some slept outside beside fires.

On 17 April, the Western Cape High Court ruled that the City of Cape Town must cease the demolitions and allow 49 shacks to be rebuilt.

On 18 April, the Gift of the Givers offered the former backyarders 100 tents for emergency relief until the City returned the people’s building materials. Not all the tents were fit to live in, some were torn and mouldy. About seven tents had holes so big they were unusable. Ali Sablay, Gift of the Givers project manager, said the tents had last been used in Mozambique for humanitarian relief two years ago.

Siyamcela Ndevu decided to abandon his tent because it kept collapsing in the wind at night. He started salvaging scrap to rebuild a shack instead.

Much of the material returned by the City was broken and could nor be used. Unable to rebuild their shacks, many people remain in tents.

The destitute community has also been menaced by criminals. At 1am on Sunday night, thugs stormed into the tent of community leader Vuyani Paraffin. “About five criminals entered my shack and demanded that I give them my cellphone. I could not make out what weapons they were carrying, but I felt scared,” he said.

The City of Cape Town media department told GroundUp that the City has “been playing more of a supporting role thus far in efforts to collect and distribute food … In general, the City is setting up a food relief distribution function at the moment to support the lead agencies in the relief efforts, being the National Government and the Western Cape Government”.

Regarding Empolweni, the City said that those concerned should approach national government. “Minister Sisulu was recently involved in food distribution to these residents … Also approach supporting humanitarian organisations operating in this area.” 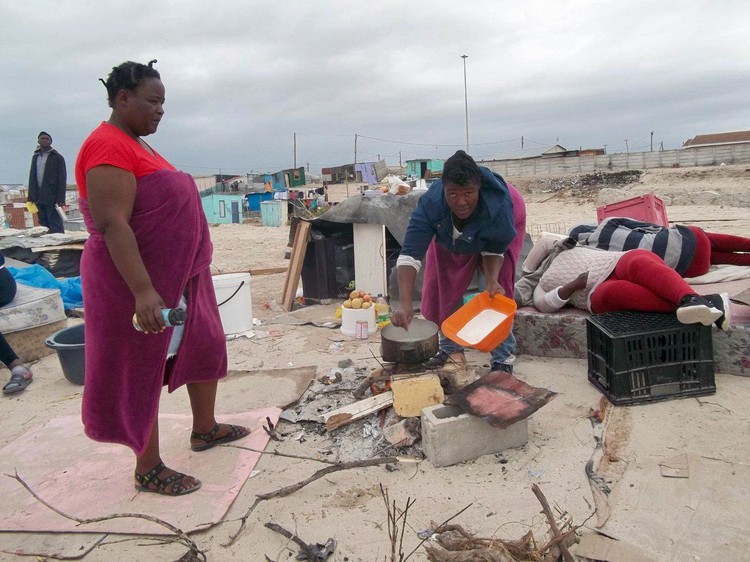 Zoleka Mpunyu and Nomkhitha Nonjezi make a fire to prepare a breakfast of pap and potatoes. Mpunyu says rats get into their food storage. Photo: Vincent Lali

Next:  Amendments to City of Cape Town by-law: are they constitutional?

Previous:  Managing the impact of fighting Covid-19 on the mental health of healthcare workers