“We begged one of the taxi drivers to take us to Bellville, but he refused and said he would not risk his life by transporting us” 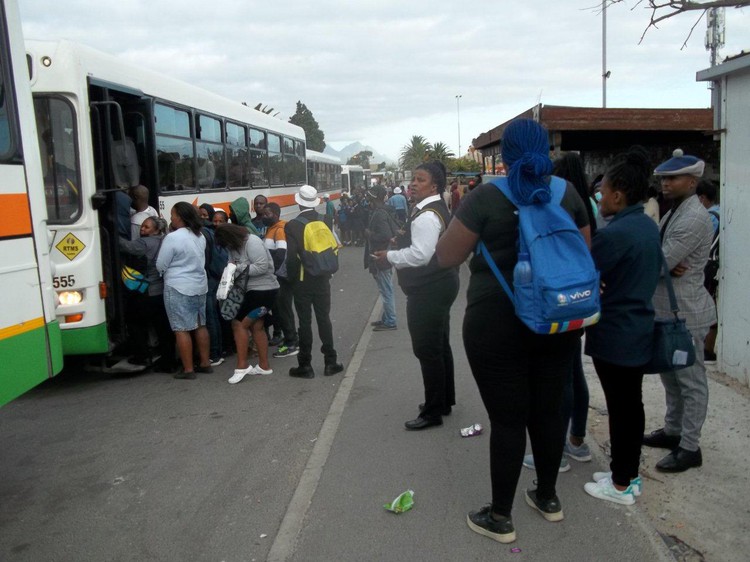 People desperately trying to get a seat on buses as taxis across Cape Town strike on Thursday morning. Photo: Vincent Lali

Scores of commuters and informal traders were left stranded at the Mfuleni Taxi Rank on Thursday as hundreds of Cape Town taxi drivers went on strike.

During protests early on Thursday morning, police spokesperson Warrant Officer Joseph Swartbooi confirmed that buses and trucks were torched and stoned. “As the circumstances surrounding the public violence incidents are being investigated by detectives, arrests are yet to be made. Heightened security measures will be maintained until we are satisfied that stability has been restored,” said Swartbooi.

As taxi drivers marched and drove in a large convoy along the N2 to Cape Town’s CBD, many commuters who rely on the service were left to find alternative ways of getting to work and school.

Mfuleni resident Lisa Mahanjana is a retail assistant at a store in Bellville and relies on her wages to support her three children because her boyfriend is unemployed. “I start work at 8am and I have been waiting for a taxi for an hour now. I can’t be absent from work because I may lose my job,” she said. Mhanjana said she took photos of the empty taxi rank to show her employer why she would be late and to plead with them not to deduct money from her salary.

“We begged one of the taxi drivers to take us to Bellville, but he refused and said he would not risk his life by transporting us,” she said.

Thembisa Xolilizwe works at Right Meat in Wynberg and has four children. She too had been waiting for a taxi since 7am. “When I sent my boss a message saying the taxi drivers are not working, she asked if I could take a bus to work. The queue for the bus is too long. I wonder if I will get it.”

Ongezwa James, who works as a security guard in Parow, said: “My bosses will deduct money from my salary for the hours I haven’t worked today. My bosses say I should have organised transport to work in time because I heard about the impending strike yesterday.”

Trader Lungiswa Gwelani, who sells face masks to support her children, said she had only sold one item so far. “By this time, I normally already sold about 50 masks,” she said. The strike means that she won’t have money for food today, she said.

Some commuters resorted to walking down Hindle Road near Mfuleni to nearby townships like Delft, hoping that some taxis there weren’t striking. But messages circulating on social media suggest that taxi drivers were warned against operating today.

This is a developing story.