Villagers of Intabazwe say municipality has forgotten them 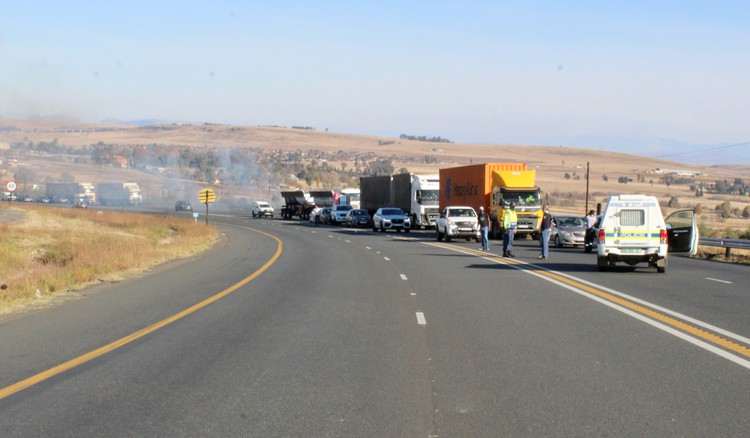 Intabazwe villagers have been blocking the busy N3 outside Harrismith on and off since Monday. Photo: Yamkela Mopeli.

At least 38 protesters have been arrested near Harrismith in the Free State during a protest.

Intabazwe villagers have been blocking the busy N3 which links KwaZulu-Natal, Gauteng, the Free State and North West, since last Monday. They also closed down all shops and schools in Harrismith town.

The protesters say the Maluti a Phofong Local Municipality has failed them and they are demanding President Cyril Ramaphosa intervene.

Protesters say the provision of water, roads, toilets and electricity are all failing. They want to separate from MAP, but they also do not want to fall under Qwaqwa, 47km away.

Police came from Gauteng, Free State and North West. Brigadier Motantsi Makhele of the Harrismith police said in a media statement police are monitoring the situation.

The arrested protesters were charged with public violence and are expected to appear before the court of Harrismith very soon, said police spokesperson Mophiring Mmako. Police members are doing their best to control the situation, he said.

Streets in Harrismith were closed using rocks and garbage early on Monday, but by the afternoon police had managed to clear the streets, although shops stayed closed.

On Tuesday, some schools and food shops opened. On Thursday, shops were back to normal.

During the week, from the hills near the N3, protesters stoned cars and rolled down burning tyres. A number of vehicles, including police vehicles, were smashed by stones. Some protesters were hit by rubber bullets.

Truck driver Nkosi Shozi was frustrated because he said he had nothing to do with the municipal affair. “We work with time. I have been waiting here for two hours now. That can only mean one thing to me – I am going to miss money.”

On Thursday the N3 was calm.

An angry Intabazwe community forum chairperson Mbuyiselo Shabalala said they had been submitting memorandums to the municipality and inviting government representatives to the village to see the situation for themselves, but no one had ever come to their assistance.

Intabazwe village is dominated by shacks. It has leaking taps. Some areas have illegal power connections. Only two of its five wards have toilets. People use the bush to relieve themselves.

I wonder if the municipality is aware we still exist,’’ said Shabalala.

He said the N3 was targeted because it is a national road and very busy, and this might get the attention of the president.

The municipality had not answered our questions at the time of publication. We were told that they are still waiting for the municipal manager.

[Editor’s note: It is unclear whether a protest on the N5 also near Harrismith but at Mokgolokoeng that made national news, in which a truck burnt out and the driver reportedly died, is related to the Intabazwe protest.]

Next:  5,000 Siqalo households have no water during the day